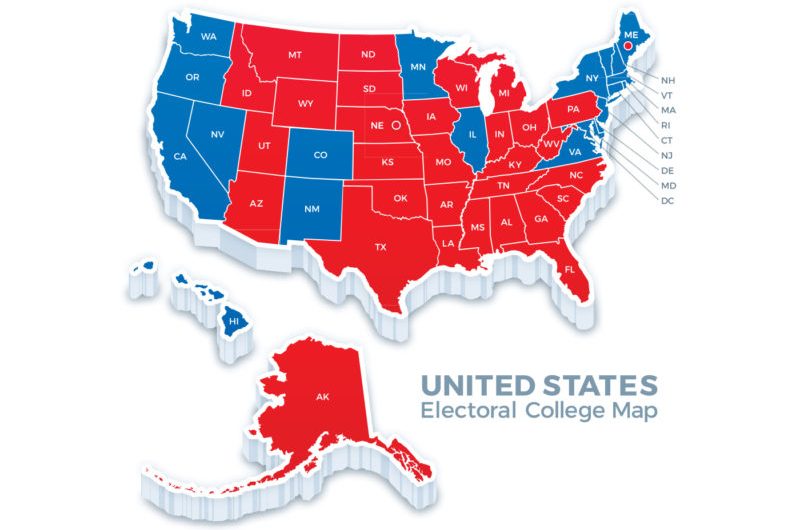 The biggest news of the 2020 electoral season (so far) is the ever-growing pool of Democratic candidates whose progressive policies are ever more in the mainstream.  Recently, the senator from my lovely home state of Massachusetts, Elizabeth Warren, made a bold statement about abolishing the Electoral College.  Other candidates have also said they were open to the idea.  But what would abolishing the Electoral College actually mean for our country?

The idea is not new.  In 2000, Republican George W. Bush beat out Democrat Al Gore for the presidency thanks to the Electoral College — despite the fact that Al Gore had received more of the popular vote than Bush.  In essence, more people in the nation had voted for Gore, but because of our winner-takes-all Electoral College system, Bush ended up in the Oval Office.  And this trend, which has happened a few times before the Bush/Gore incident, has also happened after: despite Democrat Hillary Clinton winning almost 3 million more individual votes than Republican Donald Trump, he snatched the presidency right out of her hands thanks to the Electoral College.

It’s no surprise that some Democrats are fed up with this system of indirect election for the highest office in the nation.  Every state has a number of representatives in the EC that equals the number of their Congresspeople: all of their members of the House plus the two senators.  In total, there are 538 members of the electoral college, and a 270-majority vote is needed to win the presidency. But the issue lies in how the voting occurs.  As of 2019, Nebraska and Maine are the only two US states to have proportional representation in the Electoral College. That means that 48 states have a winner-take-all situation: even if a candidate only wins the popular vote in that state by as little as a quarter percent, all of the Electoral College votes from that state goes to that winner.  Up to half of the voices in states like these can go unheard.

There’s also the issue of the representation itself.  For example, Idaho, which has a population of 1.7 million people, has 4 EC representatives.  California, with its 39.5 million people, has 55 EC representatives. That means that every Electoral College vote in Idaho represents 425,000 people, but every Electoral College vote in California represents over 718,000 people.  No wonder voter participation is dropping — a lot of people in urban areas feel as though their voice literally doesn’t matter. Under the Electoral College, citizens of states with a lower “individual voter-to-EC voter” ratio simply have more of a say in who becomes the next president.

So why not take Senator Liz at her word?  Why not just abolish the Electoral College?  Well, despite its shortcomings, it does have its benefits, too.  Because the voting system is not population-based, candidates are prone to campaign in places other than just NYC, LA, and Chicago.  In a population-based system like Warren and other candidates are suggesting, rural areas of the country would be virtually ignored in favor of more populated urban centers, where one can logically win many more supporters in much less time.

So no Electoral College would favor the urban areas, but the current system favors the rural areas.  Whatever happened to “every voice matters?” We need a system where everyone is represented equally.  There have been suggestions in the past, ranging from as simple as “give large-population states more EC votes” to as radical as “redraw the states so the districts are equal!”  But a more realistic solution than outright abolishing the EC would be to have more states follow the lead of Nebraska and Maine, with their much more democratic proportional approach.  96% of states have a “winner-take-all” situation, which silences the voices of so many people who try to be heard. So say in 2020, a particularly purple state like Iowa counts up its popular vote and finds that 49% of the population wants the Democratic candidate and the other 51% wants the Republican.  Under the current system, those 49% of people would have essentially voted for nothing. But under proportional representation in the Electoral College, maybe it could be more equal: 4 of its 7 EC votes go to the Republican candidate, and the remaining 3 to the Democrat, in order to actually represent all the citizens of Iowa.

Maybe the solution isn’t the extinction of the Electoral College, but rather the evolution.  Sure, the Founding Fathers never expected the country to one day be comprised of over 327 million people, or maybe they never would have even suggested an Electoral College in the first place.  But the system does have its benefits. Those people who live in the rural states in the middle of our country matter as much as us here in New York City. It’s time we have a system that truly represents the desires of our nation.  The Electoral College can make that happen. It doesn’t have to be absolutely direct, but the system can be changed in order to better represent the people that it claims to and fails right now.  All we’d need is a more democratic, proportional approach to casting those Electoral College votes.