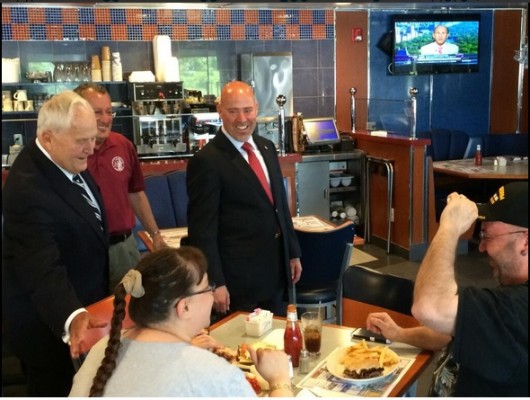 The Establishment vs. Tea Party divide within the Republican Party has been documented ad nauseum throughout the first six months of this election year. Last Tuesday’s GOP primary in Mississippi, which saw state senator Chris McDaniel narrowly edge six-term incumbent Senator Thad Cochran and force a run-off  election between the two Republicans later this month, only further accentuated the never-ending topic of analysis that is the GOP Civil War. Recent Republican primaries in Georgia, Kentucky and North Carolina, where establishment candidates won the nomination over their respective challengers from the right, further cemented GOP infighting as a significant motif in the 2014 midterm elections. Developments in Mississippi aside, yet-to-be-written history will likely dictate that the Republican Party establishment stood victorious over its activist fringe come November of 2014, an outcome that perhaps ended the Tea Party movement once and for all. And because they are traditionally red states, these electoral outcomes in Georgia, Kentucky and North Carolina effectively demonstrate the establishment’s recent struggles with the Tea Party. But the GOP divide has become so ingrained into the 2014 narrative that it’s drawing blue states into its orbit as well. New Jersey, not particularly known for its conservative activism, joined the fray this Tuesday when former Randolph mayor Tom MacArthur won the GOP nomination over former Bogota mayor Steve Lonegan in the Garden State’s Third Congressional District. Despite taking place in liberal New Jersey, MacArthur’s victory in NJ-03 over Lonegan carries a number of implications for the Republican Party and its prospects for electoral success in November.

New Jersey’s Third Congressional District, located in the southern part of the state and comprising portions of Burlington and Ocean Counties, sparked interest among political observers after Representative Jon Runyan announced his retirement from Congress after two terms in the House. Runyan, a Republican and former offensive tackle for the Philadelphia Eagles, decided not to seek re-election after becoming fed up with the increasing obstructionism of his own Republican Party, and particularly frustrated with the government shutdown last October. Runyan’s moderate brand of conservatism, which he evidenced throughout his brief tenure in Congress, is replicated by insurance executive and former Randolph mayor Tom MacArthur, who won the Republican nomination to succeed him in NJ-03. Former Bogota mayor and 2013 U.S. Senate candidate Steve Lonegan, the man who MacArthur defeated in last Tuesday’s primary, is anything but moderate and his differences with MacArthur exemplify that fact.

While both Republicans are opposed to President Obama’s Affordable Care Act, MacArthur stresses the need to replace the healthcare reform with a viable alternative in an effort to reduce costs and allow patients to keep their doctors. In other words, MacArthur does not advocate a return to the status quo. Lonegan, on the other hand is akin to right-wing sensationalism, and his website dubs the ACA a ‘dangerous proposal’, spelling out his intent to block the law’s implementation at all costs, without an alternative offer on healthcare. On the immigration front, MacArthur recognizes the need for comprehensive reform of the broken system. While he opposes “blanket amnesty” for illegal immigrants, he does welcome a “tough, but fair path to citizenship” for those here illegally, a position that the Republican Party must gravitate towards if it intends to court the Hispanic vote going forward. Lonegan unsurprisingly opposes any possibility of eventual citizenship for illegal immigrants, a position that deprives the nation of good workers and condemns the GOP to prolonged electoral defeat. The differing brands of conservatism between these two Republicans demonstrate the importance of MacArthur’s victory on Tuesday.

If the old guard of the Republican Party is in fact winning in its war with the Tea Party, then MacArthur’s victory over Lonegan is emblematic of why. Issue by issue, MacArthur toes the rational, pragmatic conservative line, while Lonegan espouses the uncompromising, out-of-touch philosophy of the Tea Party. While the differences in policy position between the two are much broader, their divergence on Obamacare and Immigration Reform are of particular significance, especially in light of the political realities of 2014. As stated, MacArthur understands the need to replace the Affordable Care Act rather than simply repealing it without a substitute healthcare plan, as Lonegan supported. In terms of this November’s midterm elections, simply running on repealing the ACA will not be an effective electoral strategy, and GOP operatives are beginning to understand that. While the law remains generally unpopular, and is the driving force behind the contention that Republicans have the advantage going into November, voters are skeptical of an outright repeal. This is why Democrats, especially vulnerable ones from red states are pledging to “fix” the law and running ads against Republicans for wanting to repeal the law without a replacement. In the case of Steve Lonegan, that would be both an effective and accurate electoral strategy had he won the primary, and had the opportunity to face a Democrat (in the case of NJ-03, Burlington County Freeholder Aimee Belgard) in a general election. The same holds true on immigration reform, which MacArthur concedes is necessary (an admittance that won him the endorsement of the U.S. Chamber of Commerce, which has established itself as a champion of rational Republicans). In opposing any path to citizenship, Lonegan again proved himself to be out-of-touch with the electorate as a majority of Americans, and many Republicans, support immigration reform.

Established GOP power players in New Jersey, understanding the risk associated in nominating such an electorally unpalatable candidate in Lonegan, opted to throw their support behind MacArthur. Lonegan’s un-electability accounted for the same tepid support that he received in his failed Senate contest against popular Democrat Cory Booker in last year’s special election to fill the late Frank Lautenberg’s seat. More broadly, national operatives are coming to a similar conclusion, and in 2014 they have generally championed the more moderate candidate as opposed to those aligned with the Tea Party and outside spenders such as Club for Growth and the Senate Conservatives Fund.

The triumph of MacArthur, in addition to aforementioned establishment victories throughout primary season thus far, appears to signal that the GOP is beginning to moderate itself, in cognizance of political realities in the year 2014. By breaking the stranglehold of the Tea Party, and the outside conservative groups that support them, the Republican Party is rediscovering its rational, pragmatic side, which it will need  to do if it plans to implement an effective conservative agenda going forward. Candidates like Steve Lonegan are ill-suited for such an agenda. Nobody doubts the conservatism of Lonegan and other Tea Party aligned candidates similar to him. The problem is getting into office. Having lost the popular vote in five of the last six presidential elections, and blowing a multitude of Senate elections over the last few elections by nominating unelectable candidates, the GOP has rendered itself electorally incompetent by the influence of the Tea Party. The American people are turning their back on the uncompromising ideology of this far right caucus in the GOP that does not demonstrate the ability, nor interest in governing responsibly. Many of the fiscal emergencies the nation has found itself in recently, whether threatening to default on its debt in August of 2011 or shutting down the government over funding Obamacare last October, were perpetuated by the far right of the Republican Party. In turn, voters have grown weary of far right candidates like Lonegan, and will only reward those Republicans who are pragmatic and rational in implementing their conservative principles, realizing that the other side has their own principles as well. Chamber of Commerce Republicans in turn become more acceptable to the electorate than Club for Growth Republicans; the former have the political intelligence to promote conservatism in government; the latter busy themselves with appeasing an uncompromising right wing constituency.

With control of the Senate at stake, and Republicans threatening to win the six seats that would give them the majority, Tom MacArthur’s victory in NJ-03’s Republican primary will be but a footnote in the 2014 narrative. The former mayor of Randolph is a slight favorite to defeat his Democratic opponent Aimee Belgard, but victory is far from certain in the generally Republican third district. His defeat of Steve Lonegan, however, is significant. In choosing MacArthur, NJ-03 voters rewarded a good conservative, but one who understands the political realities of divided government. The trend of this primary season has followed suit, and Senate Minority Leader Mitch McConnell’s prediction that the GOP establishment would ‘crush’ their Tea Party challengers from the right is being realized in primaries through the country. Whether establishment victories in 2014 will signal the final triumph of the GOP over the Tea Party remains to be seen, but the answer to that question has characterized 2014 to such an extent that not even liberal New Jersey can escape it.