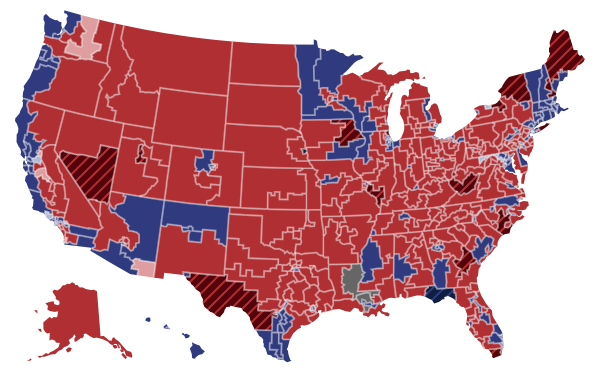 The 2014 midterm elections — the nation’s largest midterm landslide in nearly a century — marked a political watershed for the Southern states in particular. Only four years ago, at the 2010 midterms, Democratic congressmen remained cautiously hopeful that their party could hold its ground — what remained of it — in the South. Arkansas congressman Vic Snyder even went on record saying he felt there would be many moderate Democrats in the South come next election cycle. However, even as analysts warned against writing off the Southern Democrats prematurely, they admitted that their party was in dire straits, and that — either way — 2014 would determine their future. And 2014 indeed proved epoch making, for both the Southern Democrats and American politics at large. As of now, for the first time in history, there is not a single white Democratic senator, representative, or governor from anywhere in the deep South — and only a handful in the southern periphery. After enduring a half-century of electoral erosion, the Southern Democrats have completely slid from the mainstream in the states they once held most solidly — even a mere 10 years ago, their position appeared much stronger than today’s abysmal standing.

This past election cycle was the final benchmark on a long and wrenching national transformation. As several  news outlets have recently declared, the party realignment instigated by Lyndon Johnson and Barry Goldwater in 1964 has finally reached its upper limit, and in the Deep South, the Democratic Party is now almost entirely a minority phenomenon. The 2014 midterm is the sign of an America increasingly polarized and regionally divided, despite the efforts of people such as former Arkansas Senator Blanche Lincoln — a self described “moderate” Democrat — to bridge the gap. But even Arkansas, the home of the Clintons and formerly one of the Southern Democrats’ strongest bastions, sent only Republicans to the House and Senate in 2014. Today, Asa Hutchinson, a Republican, inhabits Arkansas’ governor’s mansion. Across the South, historic defeat has followed historic defeat. Perhaps the most noteworthy was that of Louisiana senator Mary Landrieu, whose loss in 2014 marks the first time since 1883 that her Senate seat has been in the hands of a Republican.

This change is social as well as political. As Dave Saunders, a strategist for conservative Democrats in Virginia (a state outside of the deep South, where both senators are white Democrats) remarked soberly in 2010, “Right now in most of Dixie it is culturally unacceptable to be a Democrat. It’s a damn shame, but that’s the way it is.” At least among white Southerners, it is increasingly suspect to identify as a Democrat — liberal, conservative, or otherwise. Across the South, the party is strongest where minorities are a majority, which points to an uncomfortable fact: The electoral turnaround is due mostly to racial and socioeconomic factors, not to any underlying change in ideology. As Don Fowler, former chairman of the DNC, remarked to the Washington Post in 2013, “Race has a lot to do with it, and if I told you anything different it would not be honest. The south was solidly Democratic for 70 years because of race, to maintain segregation. … It just became socially acceptable and socially nice to be Republican. … Look at most any southern states, other than Virginia or Florida, we Democrats have an overwhelming majority of the African American vote but only 15 to 20 percent of the white vote.” The hard fact is that we are living in an increasingly polarized America where loyalties of race, politics, and neighborhood increasingly line up. Anyone, no matter his or her political persuasion, can see the danger inherent in this sort of demographic shift. If more candidates do not begin to appeal across racial and social lines, the country will continue to head towards renewed civil tensions, to the misfortune of those caught in the crossfire.

In the face of this turnaround, Southern Democrats have been forced to adopt tactics used by Republicans in the days of the “Solid South,” namely, tactical focus on local elections in the hope of an eventual long-term strategic payoff. Pundits such as Don Fowler believe that city council members, county council members, and state legislature races are the way for their party to win back control. One manifestation of this tactic is South Forward, a federal 501(c)(4) aimed at supporting local Democratic candidates through direct financial contributions. It will also provide a candidate and campaign management training/mentoring program that will “focus specifically on women, African-American and Latino candidates and campaign managers and staff.” It is a well-considered approach, but it still has a long way to go before it bears any serious electoral fruit. Democratic elements in the South — South Forward among them — all admit that their current effectiveness is almost totally limited to minority spheres. No matter what method is utilized, it will be very difficult for Democrats to regain their wider appeal in today’s south.

While some continue to hold their heads high, everyone admits that the Southern Democrats are in very dire straits. When President Johnson predicted in 1964 that “[w]e have lost the south for a generation,” he may not have guessed that it would take a generation for that loss to be complete. Now, there is no doubt — if there was any left before 2014 — where the mainstream of Southern society places its political hopes.