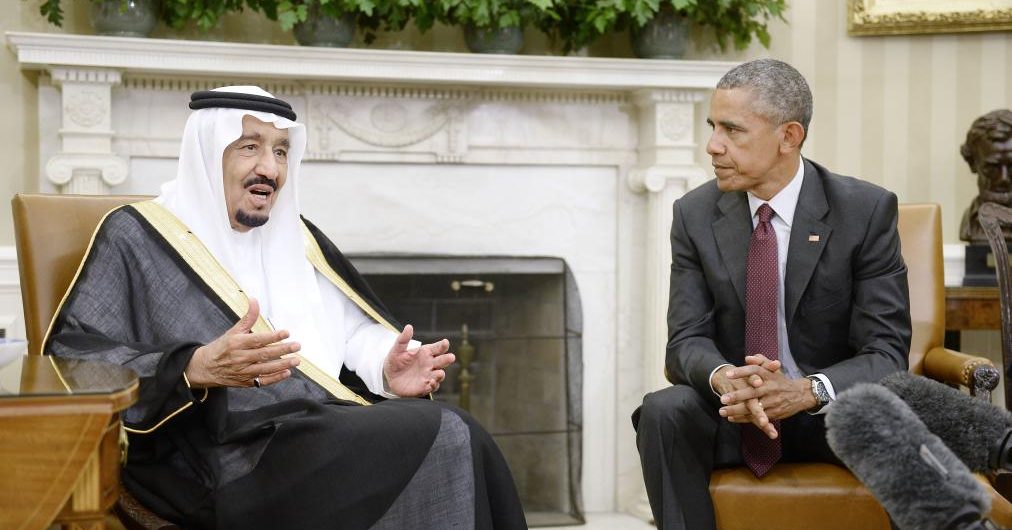 Saudi Arabia’s leaders are scared — and that’s a problem for the United States.

The kingdom is surrounded by instability. To the south, the Houthi rebellion, a local Shiite insurgency, is battling Sunni-led Saudi forces in Yemen. To the north, the Islamic State has targeted Saudi Arabia, calling for an attack on the Saudi royal family. To the east, Saudi troops put down what was seen as an Iranian attempt in 2011 at subversion in Bahrain. Further east, the Saudis are faced with their most feared rival, Shiite-ruled Iran.

The Saudis are facing insecurity at home, too. The balance of power has shifted as of late to favor Iran; its nuclear deal brought it back to the international stage. The Saudis see Tehran as a regional threat, committed to stirring up Shiite populations and exporting its “revolutionary” ideology to the Gulf and elsewhere. Concerned that Islamic State militants are organizing terrorist attacks in Riyadh, the kingdom has been conducting mass arrests of people suspected of belonging to the terrorist group. With falling oil prices, the kingdom faces an economic slowdown and restrained demand growth. At the same time, rapid urbanization and population growth is increasing oil demand faster than the country can supply it.

Saudi Arabia has long been considered as a pillar of “stability” in a deeply fractured Middle East. Now a profound sense of insecurity racks the kingdom.

The latest episode of Saudi instability has sparked international concern. On January 2, Saudi Arabia executed 47 Shiite Muslims on charges of terrorism. Among those put to death was the prominent Sheikh Nimr al-Nimr, an active voice against Shiite marginalization and critic of the Saudi regime during the Arab Spring uprisings. The mass executions quickly devolved into sectarian chaos as Iranian protesters set fire to the Saudi Embassy in Tehran, prompting the kingdom to break diplomatic ties with Iran.

Since then, the Saudi-Iranian relationship has only deteriorated. Iran’s supreme leader, Ayatollah Ali Khamenei, swore Saudi Arabia would face “divine vengeance” for executing al-Nimr. Saudi Arabia subsequently demanded other Sunni countries follow suit and break ties with the Shiite powerhouse. A few did.

In response to the escalating chaos, the United States called for greater dialogue between communities in the Middle East, with John Kirby of the State Department saying, “We believe that diplomatic engagement and direct conversations remain essential in working through differences and we will continue to urge leaders across the region to take affirmative steps to calm tensions.”

Rather than continuing to push for more policies of favored accommodation in Riyadh, American policymakers should ask themselves if it’s time for a strategic reversal.

The United States has largely stood silent to Saudi Arabia’s human rights abuses. Since King Salman’s ascension to the throne last year, the government has cracked down on freedom of expression, association, and assembly. Fearing destabilization from Tehran, Saudi authorities have been clamping down government dissidents, both Shiite and Sunni, repressing political and women’s rights activists, human rights defenders, and Internet bloggers and commentators. Dozens of peaceful activists are currently serving prison sentences for advocating political reform and criticizing the conservative regime. Torture, particularly flogging, of detainees is common. Saudi authorities have made extensive use of the death penalty and carried out numerous public executions. In 2015 alone, Saudi Arabia carried out 158 executions, 63 of which were for nonviolent drug crimes. The kingdom also routinely discriminates against religious minorities. In March of the same year, a Saudi-led military coalition launched airstrikes against Houthi rebels, backed by Iran, in northern Yemen. The attacks included relentless cluster munitions that resulted in civilian deaths.

Saudi Arabia, governed by the authoritarian House of Al-Saud, follows the puritanical Wahhabi clerical establishment. Its monarchy does not tolerate public dissent or the public practice of religions outside of Islam. Freedom House has consistently ranked Saudi Arabia among “the worst of the worst,” according to annual surveys of political and civil rights.

At the same time, providing security for the oil-rich kingdom has been a U.S. foreign policy priority since the end of World War II, making for the world’s most unlikely partnership. Even the events of 9/11 failed to break economic and strategic ties. Given their opposing ideologies and open differences to regional issues (especially the Israeli-Palestinian conflict), Washington’s long relationship with Riyadh is almost entirely built on oil. Neither could afford to forsake a relationship in which the U.S. relies on access to the Persian Gulf region as an energy supplier and Saudi Arabia seeks access to U.S. arms and technologies.

The alliance, however, now hurts American interests as much as it helps it.

The aftermath of Sheikh al-Nimr’s execution has spotlighted the broader pattern of destructive Saudi international and domestic policies. More immediately, the consequences of his execution have made it increasingly difficult for America to remain silent on the Saudi monarchy’s intentional mismanagement of Shiite dissent. The spike in sectarian tensions in the kingdom presents a moral dilemma for American policymakers. United States’ support of the Saudi-led air war in Yemen is a striking case of the appearance of inconsistency by the U.S., as it can no longer turn a blind eye to Saudi Arabia’s flagrant human rights abuses. An attitude of “realpolitik,” in which the U.S. supports or ignores the barbaric acts of favored states, is no longer a foreign policy option.

American objectives of regional stability have evolved since then. The escalating Saudi-Iranian rift struck a deep chord with American diplomats who understand the feud to affect U.S. relations with a key regional ally.

Ushering in an end to Iran’s isolation, the nuclear deal has been a big blow to the U.S.-Saudi relationship. It is telling that Secretary Kerry, in an attempt to defuse tensions, was unable to reach Saudi Arabian foreign minister Adel al Juberi; Iran’s foreign minister, Mohammad Javad Arif, answered his call immediately.

The Saudis fear the nuclear deal is only the first step of a larger détente and openly contest an American security blanket. Riyadh sees itself locked in a geopolitical struggle for supremacy in the Persian Gulf. U.S. response to the Saudi-Iranian rivalry in the coming months will thus reveal how it intends to engage with the Sunni and Shiite powers in the future, and who the White House considers a more reliable ally.

While the nuclear dear is considered to be the greatest success of the Obama administration’s foreign policy, it should not be misinterpreted. There is no indication that Washington has shifted its alliance towards Tehran. Likewise, the deal should not be understood as a signal of established Iranian regional power. The actual results of the deal will not be known for years. However, it makes no sense for the U.S. to resist exploring areas where American and Iranian national security interests overlap.

The U.S. is far less reliant on Saudi oil. In turn, the Saudis are scrambling to find other markets, like China, which is the world’s second largest net importer of oil after the U.S. Saudi Arabia relies on the U.S. market. To retain market share, Saudi Arabia is fledging an assault on America’s shale oil industry by flooding the market with cheap Saudi oil, undermining U.S. economic growth. And while cheap oil is good for American consumers, it’s bad for the shale oil industry. There is a certain point where it may force the U.S. to gain dependence on foreign energy sources.

Despite the fact that the sharp rise in U.S. oil output has allowed it to gradually free itself from Persian Gulf dependence, the U.S. continues to commit itself to preserve a generations-old political order. After all, the Saudis are major customers of U.S. military equipment. “The notion we would abandon Saudi Arabia because we don’t need their oil anymore is just stupid,” says former State Department official, Richard LeBaron. “I think this action by Saudi Arabia shows it to be flailing around as a Middle East power and not as a confident power, but at the very minimum, we have to stay engaged.”

Finally, Saudi provocations complicate U.S. goals in the region. The U.N. Security Council’s peace process in Syria is heavily dependent on cooperation between Saudi Arabia and Iran, who back opposing groups in Syrian civil war.

The new conflict between the two superpowers encourages them to bolster support for their proxy forces in Syria, which inevitably benefit the Islamic State. These proxy wars could extend beyond Damascus and trickle into Yemen, Lebanon, and elsewhere in the region.

Saudi Arabia’s overly aggressive rhetoric towards Iran and oppression of its Shiite population damage the peace process in Syria, where the narrative of sectarianism has escalated to far more than mere rhetoric. Intensifying the already precarious Shiite-Sunni political dynamic incentivizes Sunni extremism in the region increases ISIS’s scope for action there and allows Al-Qaeda in the Arabian Peninsula to gain significantly from chaos in Yemen. The Saudis essentially possess the wherewithal to ignite a broader Sunni-Shiite regional conflict.

Even though the future of the U.S. Saudi relationship doesn’t look too bright, it may not disintegrate any time soon. As Thomas Lippman reminds us, the U.S.-Saudi alliance “has proved to be as durable as it is unlikely.” As long as there is terrorism and oil, it seems that the bilateral alliance will survive. Still, it is high time the U.S. re-examine its uneasy partnership with the kingdom.