Strict Standards: Declaration of Custom_Menu_Wizard_Sorter::walk() should be compatible with Walker::walk($elements, $max_depth, ...$args) in /home/s2ncq8pxua8t/public_html/wp-content/plugins/custom-menu-wizard/include/class.sorter.php on line 0
 The Gifts of A Feminine God – FORDHAM POLITICAL REVIEW
Skip to content
Latest News
The Right is on the Rise in the U.S. But it’s Failing Elsewhere.
Race and Wrongful Convictions
Midterm Elections to Test Trump’s Influence on Republican Party
A Story You Might Have Missed – A Climate Activist and the Supreme Court
A Step in The Right Direction: What Biden’s Reaffirmation of the Armenian Genocide Means for the Future of Human Rights 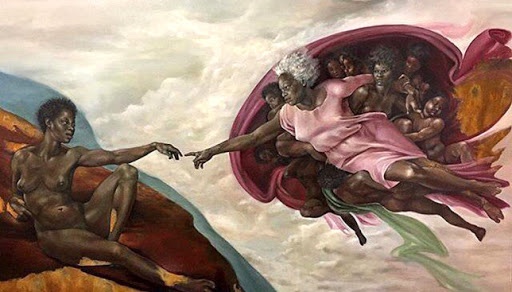 “And why did God make you?”

“To know Her, love Her, and serve Her in this world, and to be with Her in the next.”

Her, She, a female image of God. My Aunt would have this exchange with my brothers and I each time we parted. It is an altered version of the famous Baltimore Catechism, which was the standard Catholic school text from 1885 to the mid 20th century. I remember finding it a little odd, the duality of one of the most traditional American Catholic call-and-responses with the relatively progressive notion of a feminine God. I credit it greatly for forming my understanding of the relationship between gender and divinity, and the value of a feminine God.

In the Catholic sphere, there is an extreme lack of female representation in positions of power, and, with the strong exception of Mary, divinity. In the secular sphere, a lack of representation and role models has been scientifically shown to have a devastating effect on self-image. When that lack of representation occurs in the imagery of God, it tells the world that, in the words of Fordham Professor Fr. Bryan Massingale, only those represented in God can “unambiguously mirror the Divine. Only these are truly sacred. Genuinely holy. Only these are worthy of unreserved acceptance and respect.”

While critics of movements to present God as a woman often note that God “transcends the human distinction between the sexes,” (CCC 239) this does not prohibit us from using manhood and womanhood, fatherhood and motherhood, and masculinity and femininity as metaphors to understand God and Her relationship with us. It is difficult, arguably impossible, for humans to fully grasp God in Her transcendence, and so humans have used anthropomorphic analogy and imagery to understand Her since prehistory. Despite modern mainstreaming of solely male imagery of God, precedent for female imagery in the form of femininely gendered metaphors for God dating back to the Old Testament. Isaiah 66:13 uses motherhood as an explanation of God’s care for humanity, “As a mother comforts her child, so I [, the LORD,] will comfort you; you shall be comforted in Jerusalem.” And Numbers 11:12 provides pregnancy, birth, and infancy as an explanation of the concern that went into the creation of humanity, “Did I [, the LORD,] conceive all these people? Did I give birth to them, that you should say to me, ‘carry them in your bosom, as a nurse carries a sucking child, to the land that you promised on oath to their ancestors’?”

The most interesting of the feminizations of God is Deuteronomy 32:18, “You deserted the Rock, who fathered you; you forgot the God who gave you birth.” In this verse, God is presented as both male and female in the same strain of thought, very important considering the millennia of translations and oral transmission between the earliest biblical compositions and the latest. This verse presents femininity in communion with masculinity, not in opposition to it, which validates the spectrum of ways people can express their gender identity and the ability of people to concurrently present characteristics at different points along that spectrum. This acknowledges a level of truth and value to the imagery of God across the gender spectrum and therefore affirms that patriarchy is not derived from God.

In a feminine God, we find many gifts: gentleness, empathy, sensitivity, and the many other kindnesses traditionally associated with the female end of the gender spectrum. These gifts are particularly relevant in the modern social and political climate, where those assigned one sex at birth are increasingly empowered to live out their true gender identity and yet are unfortunately met with high levels of sexist, homophobic, and transphobic backlash amplified by modern forms of communication. An example is the recent development of terms like “soy-boy” and “simp,” which devalue those men who choose to live kindly, compassionately, and, implicitly, femininely. By elevating both ends of the masculine-feminine spectrum, traditionally often used to confine people to certain social norms, we invite all people to share in these gifts and to understand that these gifts are divine.

The most important gift of the image of a feminine God is the ability of women to be seen in God, which allows God to be seen in women. The imagery of God as a woman reminds us to be cognizant of the intrinsic divinity of women and to work to ensure that divinity is respected. Respecting the inner divinity of each person means treating them with care and human dignity, and working to secure their human rights. I am drawn to the words of the mother of Dr. Jackie Ogega, the Director of Gender Equality and Social Inclusion at World Vision, who told her daughters, “Picture me, and then, girl, picture yourself!” With this language, she told her daughters to see her struggles, recognize that they deserve better, picture a more just reality, and go forth to create it.

A feminine God provides particular gifts with regard to intersectionality. Traditionally, there is an association of Blackness with masculinity, which denies the femininity of Black women. Similarly, Asianness is associated with femininity, which denies the masculinity of Asian men. By providing an image of a feminine God in communion with a masculine God we elevate all those who are harmed through the conflation of their identity with gender roles.

It is important that we be cognizant of providing a mirror in God not just to women, but to all those who are not represented by current mainstream imagery of God.  Let us continue to more truly represent the diverse face of God, so that we may recognize and uplift the divinity of the refugee and the sex worker; the gay teen and the nonbinary senior; the Black girl and the Asian boy; and the gifts they all bring to the table.

Everyone deserves the opportunity to see themselves in God, so that they may recognize God in themselves.