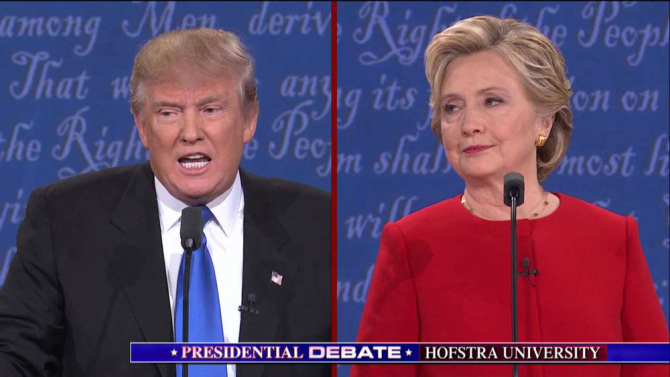 On Monday night, the first presidential debate took place a stone’s throw away from Fordham at Hofstra University. The 90-minute debate gave only a glimpse into each candidate’s policies, but nevertheless revealed each of their important strengths and drawbacks, which will receive more intense scrutiny as the election draws nearer.

Trump managed to steer clear of his numerable controversial statements about Mexicans, Muslims, and women. Even though he was asked several pointed questions that could have led him down this road, such as a reference to a recent questionably sexist comment he made about Clinton not having “the look” of a president, Trump avoided making blatantly sexist/xenophobic hedges and alienating his viewers.

Trump failed to put coherent policies and plans to the questions asked of him and instead relied on tautologies. For instance, he emphasized “law and order” and the injustice of persistent systemic racism, but failed to produce more concrete solutions to heal race relations. Trump relied on inaccuracies and frequently contradicted himself in the same sentence, notably when he pointedly agreed with Clinton that nuclear weapons are our current biggest threat, then subverted the argument to imply that this was his idea and that Clinton thinks otherwise.

The candidates barely got through a point-rebuttal exchange before Trump took advantage of Lester Holt’s weak reign and started consistently talking over Clinton, in violation of debate etiquette. This disregard made some of his points hard to follow and could come across as narcissistic to some voters.

Clinton had concrete answers for the questions put to her and remained consistent with her campaign policies. Even when the question at hand seemed to get lost in a muddle of quibbling over secondary factors, Clinton tried to navigate her way back to the specific policies she would want to put into place. She tried to adjust her image as a privileged politician by referencing her origin as the daughter of a small-business owner and highlighted the progress made during her time as senator of New York and secretary of state. These references became somewhat stale with repetition, but did serve to highlight her accomplishments and make her more palatable to the middle class. Clinton also capitalized well on one of Trump’s flaws by directing viewers to her website, where live fact checkers were waiting to pounce on him.

As expected, Trump brought up Clinton’s email scandal. She apologized for the umpteenth time, but she has yet to provide an adequate explanation to really put our minds at ease. No matter how many times she brings up her small-business owning family, the image of her as a crooked politician won’t be dispelled without a compelling reason to trust her if she were elected.

Clinton’s facial expressions betrayed her amused disbelief at sharing the stage with Trump. A perceived judgmental attitude won’t help her win over many undecided voters. Some news outlets have also deemed her “overprepared” for the debate, perhaps because she came across as cool and scripted in contrast to Trump’s more genuine and candid style.

There is a general consensus that Clinton came out on top of this debate, but this isn’t due so much to her stellar performance as her coherence thrown in sharp relief next to her opponent. She needs to do more if she is to reign in undecided voters. For his part, Trump would do well to complement his oratory skills with clear and consistent plans for the presidency. We’ll see if they can bring themselves up to par for the next debate on Oct. 9.