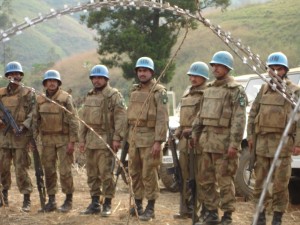 For as long as there have been wars, there has been the need to clean up after them. One of the most important tasks in post-conflict reconstruction has been to return societies to a state of normalcy. Traditionally, militaries and humanitarian organizations undertake this role separately, each with their own set of mandates. Beginning in the 1990s, however, their mandates began to intersect, with increasing intensity in the second half of the decade. The international community’s response thus far has been to clearly demarcate militaries and humanitarian actors, with strict guidelines prescribing their cooperation. The bad news? This approach is outdated, and needs fixing – urgently.

Human security was a concept first articulated in the United Nations Development Program’s 1994 Human Development Report. As a principle, it has formed the basis for military action in humanitarian crises, encompassing concerns and challenges above merely defending state sovereignty. Human security became a ubiquitous international norm with the conclusion of the Cold War. Peacekeeping has evolved from traditional missions to what the United Nations terms “complex multidimensional enterprises.” Militaries play a crucial stabilizing role in post-conflict situations, from peacekeeping operations in Sudan, to humanitarian assistance in the Horn of Africa. More national armed forces are participating in humanitarian and disaster relief operations and peace-support operations of increasing scope, complexity, and frequency.

What is the role for militaries in humanitarian crises?
Disciples of the famed Prussian General Carl von Clausewitz argue that military action should be an extension of strategy. Military forces therefore should engage in humanitarian efforts as part of a “deliberate strategy designed to encroach upon traditional humanitarian space,” according to the Humanitarian Practice Network, a UK-based humanitarian think-tank. Advocating for greater military involvement, defense officials point toward practical needs. They argue the need to respond to the perceived inadequacies in ground operations. External military forces must often maintain law and order, or provide military and political support to local governance structures that had been weakened by conflicts. Military support also provides assistance in delivering relief and protecting supplies, convoys, and staff.

Opponents blame military involvement for compromising the fundamental tenets of humanitarian aid, namely: impartiality, neutrality, and independence. What these principles mean is that aid must be disbursed solely on the basis of need, that aid organizations cannot take sides in a conflict, and that aid should only go towards humanitarian needs. These have a practical purpose. By adhering to these principles humanitarian organizations can gain access to people in need. Apolitical agencies such as the International Committee of the Red Cross, for instance, enjoy far better access to target populations for this very reason. When the founders of Médecins Sans Frontières (MSF), or Doctors Without Borders, left the International Committee of the Red Cross (ICRC) to establish their organization in 1971, they did so to emphasize the importance of bearing witness to endangered populations, an inherently political mission. Today, the ICRC is able to operate in many more locations than MSF.

Militaries are, by their very nature, partial. They weigh the costs and benefits of allying with certain groups over others, a calculation informed by geography and political, cultural and social affiliations. Intervention aligns militaries with humanitarian agencies, putting them at risk of local hostility. Dadaab, Kenya is home to a refugee camp housing the largest number of Somali refugees. After two of its aid workers were kidnapped from the Dadaab refugee camp in February 2012, MSF was quick to distance itself from the Kenyan government. Military involvement may often undermine humanitarian efforts.

Other skeptics among the humanitarian NGO community argue that military interventions are neither cost-effective nor practical. They say that military aid is unsustainable, merely focused on the short term, and unable to adapt to local conditions. Militaries are most often involved in humanitarian work in the aftermath of conflicts, an almost natural extension of their roles. In recent years this involvement has only intensified. In 2006, the United States Department of Defense released a directive boosting military involvement in post-conflict reconstruction efforts. This directive would increase collaborations between NGOs and the military and more governmental involvement in humanitarian assistance. Groups like Oxfam and the International Rescue Committee condemned the directive, citing the danger of politicizing humanitarian aid and crippling aid organizations’ ability to carry out their work.

Still, apologists for a military-led approach argue that militaries stabilize dangerous situations. Modern conflicts are very complex creatures that require time and resources to resolve. Long after the end of formal hostilities in Afghanistan, the Pakistani army still stations 10,000 men in its northern tribal areas on UN peacekeeping missions. Still, if humanitarian aid is a messy business, then military involvement only worsens it. The issue is that, as humanitarian and military mandates intersect, we are left with a new creature. And we have not learned how to manage it yet.

The Humanitarian Military
The world faces a new form of military activity in humanitarian spaces. In the wake of the 2010 earthquake in Haiti, the United States Department of Defense dispatched military units to participate in humanitarian efforts. A day after the earthquake struck, C-130 Hercules aircraft had airdropped 6 tons of cargo, vehicles, and equipment. Within a week, the USS Bataan had brought US Marines to Haiti to begin reconstruction efforts.

But militaries should not be beholden to the same rules as humanitarian agencies, and vice versa. Take, for instance, the Oslo Guidelines. Introduced in 1994 as rules to govern military aid in humanitarian work, they were revised in 2006 as a response to the unprecedented deployment of military forces following the natural disasters in 2005. These guidelines apply to disaster relief operations. But no equivalent guidelines exist for post-conflict reconstruction.
In fact, militaries in post-conflict humanitarian work often contravene these guidelines. Militaries often prefer to take the lead, refusing to cede authority to civilians—and as a result military and humanitarian operations often intersect. Furthermore, these engagements are plagued with the lack of a clear exit strategy. The problem is, these are the day-to-day realities of military deployments. Militaries are in the business of waging war, and humanitarian aid is an entirely new dimension to their work. Worse still, military forces are intensely mission-driven, putting them fundamentally at odds with humanitarianism. To accomplish “hearts and minds” counter-insurgency campaigns, some militaries even pursue overtly humanitarian objectives. Donald Steinberg, of the International Crisis Group, noted that soldiers are insufficiently trained to handle the social complexities of humanitarian crises. Adjusting to the realities of operating in a humanitarian space will require a fundamental realignment.

One potential solution is for governments to define the nature and scope of military operations in humanitarian settings. Civil-military cooperation may not be a bad thing. In many cases, it may even be the best solution in a bad situation. The problem arises in dealing with the emergence of new creature: the humanitarian military. Without proper guidelines, militaries and humanitarian organizations will be gambling with the lives of those they were meant to save.

Brendan Foo was a senior at Fordham College at Lincoln Center and can be contacted at bfoo@fordham.edu.