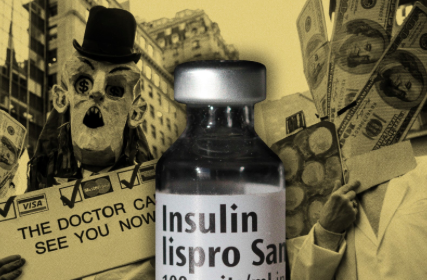 Imagine a tax on air.

Now imagine a tax on your pancreas, which creates a hormone called insulin.  Insulin allows your muscles and tissues to absorb glucose, a sugar, into your blood.  Essentially, insulin is the hormone that regulates your blood sugar.  This process is necessary to keep your body running smoothly; it’s necessary to live, as much as air is.

Of course, the human body is fickle, and things can go different.  There are a few illnesses linked to high blood sugar, or hyperglycemia. One is Type 2 Diabetes.  This is when your cells don’t respond normally to insulin because of metabolism issues for various possible reasons, such as obesity or genetics.  This insulin resistance causes the sugar to build up in the bloodstream, and leads to hyperglycemia.  Another one of these illnesses is Type 1 Diabetes.  In this case, your pancreas simply doesn’t make enough insulin for your body, or any at all, and therefore your blood sugar is too high because your muscles and tissues can’t absorb glucose from the bloodstream.  Both of these conditions are dangerous, and type 1 diabetes especially is life-threatening if left untreated. Both can be solved by insulin injections or insulin pumps — day-to-day treatments that help regulate and control your blood sugar.

It costs around two to four dollars for a pharmaceutical company to produce one vial of insulin.  Usually, a person with type 1 diabetes needs two vials per month.  For a medication so important and so easily made, you’d think it would be easy enough to access, right?  But in fact, many people with both types of diabetes, especially those with limited financial means, have been struggling for a long time to afford high insulin prices.  In 1996, one vial of insulin cost about $20 – so $40 a month – and about 10-20 times the amount of money it takes to produce it. By 2012, the price of insulin rose to around $234 a month; by 2016, it had nearly doubled to $450 a month, or around $5,400 a year.  Type 2 diabetes is first treated with lifestyle changes, including healthy eating, more activity, and pills, but insulin injections is the next step for those who need more help regulating their blood sugar.  But for people with type 1 diabetes, insulin is the only way to stay alive. And it’s not just getting the insulin; it’s getting safe, effective insulin.  Ineffectual or poorly regulated treatments can lead to blindness, issues with blood circulation, kidney failure, or death.  Simply put, access to insulin saves lives.

Yet for those who can’t afford to set aside around $5,400 a year for a hormone that other people’s bodies make for free, paying out-of-pocket for a medication that is necessary to survive has been a bit of a struggle.  Some people are forced to choose between insulin and other medications, or even insulin and basic life necessities like food; others actually ration their insulin to make it last longer, a dangerous practice that could lead to their death.  With good healthcare insurance, a patient could be expected to pay just around that $40-a-month cost out of pocket, the price from 1996. For uninsured diabetes patients, though, or those with more penny-pinching providers, reality catches up to them much quicker.  The whole $5,400 could be out of pocket. In June of 2019, a group of six people drove over the border to Canada to buy a total of $12,000 (USD) worth of insulin.  In Canada, it cost them a tenth of that price, just $1,200.

Why is insulin so expensive in America, compared to other places around the world?  One reason is that just 3 companies control almost the entire world-wide insulin industry: Eli Lilly, Norvo Nordisk, and Sanofi. They monopolize the sale of insulin and are able to set the prices as high or low as they want.  (They opt for the high end.) To its credit, Eli Lilly said earlier this year that it would be offering a cheaper version of its most popular insulin product, for only $137.35 a month, or $1,648.20 a year.  Yes, a discount; no, not enough for some uninsured, financially challenged people with diabetes. Pharmaceutical companies also use patents (and patent loopholes) in order to prevent other companies from producing insulin products.

T1International is a USA-based advocacy group founded in 2013 for people with type 1 diabetes. They advocate against the rising prices of insulin, and have held vigils outside of Eli Lilly’s headquarters in order to raise awareness for the lives that have been lost rationing insulin.  Bills have been introduced at both state and federal levels in order to address the insulin crisis, including recently-passed HB19-1216 of Colorado that capped insulin prices at $100 per month, and Vermont’s S.175 which created a program to receive insulin imports from Canada.  These are steps, but they are not enough to ensure access to insulin for every person in America.  It is impossible to stress how important insulin is for the human body. If you don’t have diabetes, your body still has insulin; it’s naturally produced.  For those who don’t naturally produce it, receiving their injection treatments are as important as eating and drinking in order to stay healthy, stay alive.  Organizations like T1International have been working hard in order to ensure that every person with diabetes has access to the medication that they need, without needing to jump through the monetary or insurance-based hoops that cause some people to go days, weeks, or months without the essential hormone.  Keeping this medication out of the hands of those who need it to survive is as ridiculous and inhumane as taxing air.