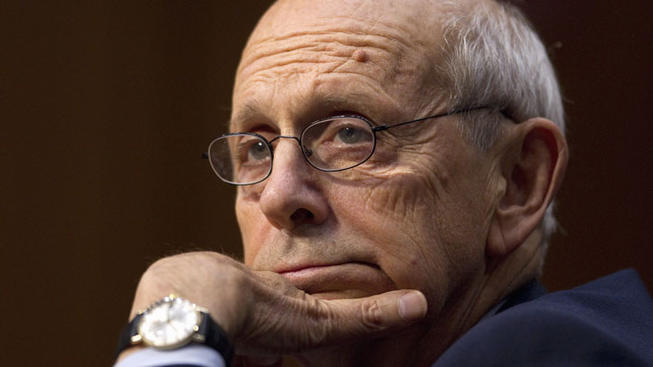 Pragmatic liberal technocrat—sounds exciting, right? If you’re not exactly squirming in your seat to read more, I understand. After all, technicians don’t excite a crowd in the same way as ideologues. The more provocative philosophies on the Supreme Court—the “insistence on original intent as the only legitimate source of constitutional authority” present in Justice Antonin Scalia’s jurisprudence and the focus on America’s “evolving notions of opportunity and equality” underlining the jurisprudence of Justice Ruth Bader Ginsburg—attract admirers and enthusiastic supporters from their respective ideological corners because of their passion, intellectual force, and eloquence. These heavily ideological approaches, as well as the swing vote of Justice Anthony Kennedy, consume the public’s attention in landmark cases such as the recent decisions in Hobby Lobby v. Burwell 573 U.S._ (2014), National Federation of Independent Business v. Sebelius 567 U.S.___ (2012), or United States v. Windsor 570 U.S.___(2013). In cases of both high and low visibility, little attention is paid to the novel constitutional jurisprudence of Justice Stephen G. Breyer.

Where the farthest corners of the liberal and conservative wings see theoretical anathema in the other’s exercise of judicial review, Justice Breyer is guided instead by consideration of the consequences of the Court’s decision and the intentions of the legislature in enacting a statute. This practical focus gives his opinions a remarkably pragmatic and occasionally moderate streak despite his established reputation as a member of the Court’s liberal wing. While opaque terms like “pragmatic liberal technocrat” might not attract a devoted multitude to Breyer, his jurisprudence is actually quite appealing. It presents a tangible approach to strengthening the trust between the judiciary and democratic institutions and revitalizing consensus-building in an era of increasing cynicism and political polarization in Washington.

The overt pragmatism of Breyer’s jurisprudence is based largely in his experience before joining the Court. A graduate of Stanford University, a Marshall Scholar, and a graduate of Harvard Law School, Breyer earned a reputation as a brilliant lawyer and professor of administrative law at Harvard Law School and the Kennedy School of Government. He demonstrated this expertise as an aide to Senator Ted Kennedy and Chief Counsel to the Senate Judiciary Committee from 1979 to 1980. As an aide to Senator Kennedy, he played a key role in the 1978 deregulation of the airline industry by facilitating agreement between Senate Republicans and Democrats. His reputation as a consensus-building pragmatist led to his appointment by President Carter to the First Circuit Court of Appeals and his easy confirmation by the Senate in December 1980. Breyer became the Chief Judge of the First Circuit Court in 1990 and remained there until his appointment to the Supreme Court by President Clinton in 1994. His time on the First Circuit Court further solidified his moderate credentials and pragmatic approach. Justice Breyer’s vast academic and professional experience in administrative law has influenced him to this day, steering him away from staking out an unyielding theoretical position in contrast to many members of the current Court. Instead, he bases his jurisprudence in more practical terms.

When exercising judicial review, Breyer believes judges should focus on the facts at hand: the regulatory problem the legislature seeks to solve, the purpose of certain provisions in a statute, and the consequences of the Court’s decision. When hearing a case, Breyer believes “Judges must seek an interpretation that helps the textual provision work well now to achieve its basic statutory or constitutional objectives.” Justice Breyer is therefore hesitant to lay down bright-line precedent when interpreting a statute, saying: “I have long admired judges who… saw the judge’s job, not as laying down a rule, but as getting it right and who compared statutory interpretation, not to a game played with rules, but to an artist’s interpretation of a musical score.” From this pragmatic style, we see a proponent of judicial restraint apt to defer to the legislature’s expertise. This may seem odd considering that, according to conservatives at least, liberal justices “regard an aggressive judiciary as their natural ally.” Therefore, to better understand Breyer’s deferential and pragmatic jurisprudence, one must examine the philosophy of democratic participation that underpins it.

Breyer’s pragmatic jurisprudence is philosophically justified by the presence of a central democratic theme that he argues is inherent in the composition of the U.S. Constitution. Breyer draws the basis for his lodestar of democratic participation from the concept of the “liberty of the ancients,” which, according to Benjamin Constant, consisted of “[the people] exercising collectively… several parts of the complete sovereignty.” This shared sovereignty among the polis is found in the historical example of the absolute democracy in Ancient Athens; all eligible citizens could actively participate in the governance of the city. Breyer operates in the context of this historical example when analyzing the thematic elements of the Constitution. He argues that the Framers sought to reconcile the absolutely democratic “liberty of the ancients” with the modern negative liberty of protected personal rights; the liberty that emerged was a new form which he calls “Active Liberty.” The Framers’ commitment to “Active Liberty” in the Constitution is evidenced by their establishment of a constitutional Republic dedicated to democratically accountable decision-making, public participation in the political process, and protection of negative liberty. “Active Liberty” premises that the will of the people is enacted through the expert legislators they elect to represent them in the lawmaking process. Therefore, the Court should be guided by a commitment to improving the functioning of this democratic institution in order to ensure the people’s continued trust in its legitimacy.

Breyer’s fondness toward “Active Liberty” is most visible in his jurisprudence on campaign finance. Former White House Counsel Robert F. Bauer characterizes Breyer’s view of the relationship between the Judicial and Legislative branches in the area of campaign finance as one where “the judiciary and the legislature work jointly to shape an informed dialogue among citizens about the formation of public policy.” The necessity of an informed citizenry in a robust democracy is evident in Justice Breyer’s view of the First Amendment as “seeking to facilitate a conversation among ordinary citizens that will encourage their informed participation in the electoral process.” When it comes to campaign finance laws restricting contributions to politicians and political parties, they “help to further the kind of open public discussion that the first amendment seeks to sustain,” by preventing certain interests from dominating the discussion and misinforming the public. This paradigm was at the heart of his concurring opinion in Nixon v. Shrink Missouri Government PAC 528 U.S. 377 (2000) and his concurring opinion in McConnell v. FEC 540 U.S. 93 (2003). His majority opinion in Randall v. Sorrell 548 U.S. 230 (2006), where the Court struck down Vermont’s base contribution limits as unconstitutionally low, summarizes his perspective the best:

It is unfortunate that Justice Breyer’s approach to constitutional law isn’t as well-known as his some of his colleagues’ because it has much to offer to the practice of constitutional law and the American political system as a whole. Like the rest of the federal government, the Supreme Court is experiencing the effects of political polarization. When looking for a way forward in this environment, the moderate perspective of Justice Breyer presents a more palatable model than the notoriously ambiguous jurisprudence of fellow moderate Justice Anthony Kennedy. Breyer’s consensus-based approach provides a way to bridge the gulf between the two poles on the court while still allowing for the justices to stand by their principles.

The value of Breyer’s consensus-based approach was demonstrated in his ability to bring both sides together through his authoring of the unanimous majority opinion in NLRB v. Noel Canning 573U.S. ___ (2014). In his opinion, Breyer addressed the concerns of the liberal and conservative wings by protecting the right to Presidential recess appointments in senatorial absences of 10 days or more while limiting the use of recess appointments during pro forma sessions. Here, Breyer demonstrated his ability to weigh the intent of legislative actions and the consequences of the Court’s actions to reach a politically acceptable decision. This pragmatic approach protected the court from the ire of the Executive and Legislative branches and demonstrated to the public that the justices could act against their partisan allegiances, thus strengthening the democratic legitimacy of the court. In this example of consensus-building, Justice Breyer also presents a model of pragmatism to the other federal institutions with the potential of breaking the partisan log jam and restoring a modicum of the electorate’s trust in the federal government.

The most important lesson Congress and the President can take from Justice Breyer is the central premise of his constitutional philosophy, the goal of making a better functioning government focused on fostering democratic participation. When looking at the current relations between Congress and the Executive branch, one sees only dysfunction and division. So far, only 185 bills have become public law, putting the 113th Congress on track to be one of the least productive Congresses in history. On top of that is the fact that Congress has been unable to act on the problems it has the responsibility of addressing, like the long-term financial solvency of federal entitlements, our broken immigration system, and the extension of the workplace protections in the 1964 Civil Rights Act to the LGBT community. While Congress fights amongst itself and with the President, coming to impasse after impasse, Americans are still hurting in this modest economic recovery and beginning to express their discontent with the status quo. In an environment of gridlock and growing apathy, it is completely reasonable that democratic participation and trust in government would suffer. The best remedy to this situation is to follow the lead of Justice Breyer and approach the problems of our political system with an eye toward compromise and consensus. By doing so, our lawmakers will strengthen their connection to the people by demonstrating their commitment to improving the democratic system.

Ironically, it seems that a member of the least democratic branch of the federal government has much to teach democratically elected officials about doing their jobs.