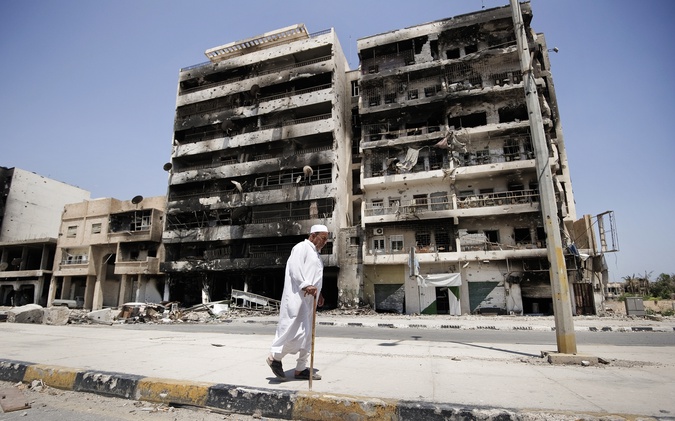 Libya once stood as the triumphant case study of Western intervention in the Middle East. In the immediate wake of the military victory, war advocates pointed to the ousting of Colonel Muammar al-Qaddafi as proof that their war was a success. Intervention opponents were mocked as the New York Times declared that Libya should be seen as a model of success for other Arab revolutions. Former French President Nicolas Sarkozy and British Prime Minister David Cameron were applauded as benevolent visionaries for intervening on a “purely humanitarian basis” as they offered their support for the new Libya. Hillary Clinton, one of the leading architects of the Libya intervention, was widely praised for her smart application and lobbying of U.S. foreign policy power in Benghazi.

“We came, we saw, he died,” joked the former secretary of state in a moment of levity after hearing news reports of the mob rape and murder of the deposed Qaddafi.

Five years after the illustrious NATO bombing campaign, Libya has all but completely collapsed. Once the richest country in the African continent, just 300 miles away from Europe, Libya is now a failed state. Oil production has stopped in Africa’s most oil-rich country, leaving the economy in shambles. Egypt, Algeria, and Tunisia each closed their borders with Libya. American, French and British embassies have all left. As of 2015, the UNHCR estimates that at least 434,000 people have been internally displaced. Government control has slipped into the hands of warring tribal, ethnic and ideological groups that have cashed in on Libya’s power vacuum. In Tripoli, Islamist extremist militia fighters have set up their own quasi-government, marshaling away the country’s second elected legislature. About 800 miles to the east in Tobruk, Libya’s runaway parliament has sought refuge, not really governing anything.

The fall of Qaddafi has launched a geopolitical reign of terror across the Middle East and North Africa. Libyan weapons have spread at “an alarming rate,” according to a report to the U.N. Security Council, plaguing large sections of territory from the Sahel region and Northwest Africa to the eastern Mediterranean, including Syria and the Gaza Strip. The spread of weapons from Libya is destabilizing the region as they are militarizing anti-government movements in Africa and falling into the hands of so-called Islamic State fighters. Following the arms proliferation, highly complex and transnational organized criminal groups have been able to flourish and enlarge their foothold in the country. Smugglers currently dominate its northern coast, making it a major center of human trafficking. ISIS has established its most dangerous outpost on the coastal city of Sirte, where multiple gruesome attacks have occurred since early 2015. All this occurs against a backdrop of widespread civilian death, torture, and rape that completes the picture of a state that has failed at its core.

The impact of U.S. involvement in Libya cannot be understated.

What is most notable here is not how violently and tragically Libya unraveled. That was predictable. Overthrowing a dictator will only do so much good for a people if the proper infrastructure and civil society institutions necessary to rebuild that state are not in place. What is most notable, however, is how quickly the U.S. and its allies have forgotten the events in Libya in 2011.

This prompts a menacing question: How long until we hear (again) that it is necessary to militarily intervene in Libya?

A recent article from The New York Times provides an answer:

“Worried about a growing threat from the Islamic State in Libya, the United States and its allies are increasing reconnaissance flights and intelligence collecting there and preparing for possible airstrikes and commando raids, senior American policy makers, commanders and intelligence officials said this week. … ‘It’s fair to say that we’re looking to take decisive military action against ISIL in conjunction with the political process’ in Libya, [Joint Chiefs of Staff Chairman General Joseph] Dunford said. ‘The president has made clear that we have the authority to use military force.’”

Five years later, the U.S. is about to embrace the destabilizing effects of its first military intervention to justify a second bombing campaign in Libya. The New York Times editorial page has already warned against the new American military intervention, explaining it “would represent a significant progression of a war that could easily spread to other countries on the continent.” The only benefit of NATO’s first bombing of Libya appears to be a vibrant cycle of endless militarism. Hawkishness has apparently become the new foreign policy du jour.

As Washington and its NATO allies shift military action from Syria to Libya, it is clear that they have failed to learn from their experience in Libya. Firstly, unless a state is already targeting noncombatants, the U.S. and its allies should learn to withhold from intervening in ways that reward an opposition but endanger civilians, even if that intervention is conducted in the name of humanitarianism. It is the only way to avoid this pathology. For instance, before NATO’s intervention in Libya in mid-March of 2011, Qaddafi had already regained control of most of the country. At about six weeks in, the conflict was coming to an end. There were about 1,000 deaths, in total. In intervening, NATO had given the opposition another chance to resume its attack. Seven months and an estimated two billion dollars later, the West’s triumphant bombing campaign resulted in scores of unacknowledged civilian deaths. Harvard University’s Belfar Center estimates the death toll following NATO’s intervention at 7,000. The key lesson here is that humanitarian intervention can backfire and cause rebellion to escalate.

Secondly, Washington must resist the tendency to play the role of hegemon in the Middle East, and thus resist forms of intervention that elicit regime change. Consider the United States’ disastrous invasion and occupation of Iraq: if the U.S. campaign in Iraq had successfully achieved its objectives of regime change, that is, undercutting Saddam Hussein’s support and establishing a new government in Baghdad, it most likely would have triggered an Iraqi civil war. In reality, Washington’s hard unilateralist campaign in Iraq did more to catalyze anti-American sentiment across the region than it did to enforce Iraqi no-fly zone from Saudi Arabia. Likewise, sub-state groups often work to attract foreign intervention in order to achieve some sort of political objective, like regime change. This has historically amplified risk to civilians. At the same time, when intervening states are motivated by a desire to liberate a country’s citizens by initiating regime change, the intervening state will usually justify their use of force to the international community, thus endangering citizens. Thus, interveners do not usually consider the option of a negotiated peace settlement that would essentially allow a regime to keep its position of power, despite the fact that ceasefires are the quickest way to end conflictual violence. And so, it is unsurprising that when Qaddafi’s son, Seif, expressed the desire to negotiate a ceasefire with the U.S., Washington did not reply warmly. Another senior Libyan military officials proposed a 72-hour ceasefire, which involved an arranged exit for Qaddafi and his family. In a spectacular display of failed diplomacy, “Secretary Clinton did not want to negotiate at all,” says Rep. Dennis Kucinich, U.S. intelligence official.

In 2016, Tripoli has disintegrated into a non-existent political entity. Qaddafi’s fall has rendered Libya’s worst-case scenarios into realities. Before the U.S. sleepwalks into another unnecessary war with Libya, it needs to adequately weigh intelligence concerns and learn from the past. In defense of future interventions, Mrs. Clinton argues that it is still too early to conclude whether the 2011 Libyan intervention was a success or a failure. The answer, however, seems clear.