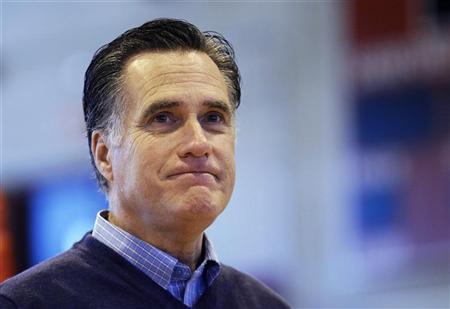 During the recent midterm elections, 2012 GOP presidential nominee Mitt Romney was a sought out commodity on the campaign trail for Republican candidates. After a string of successful primary endorsements, Romney emerged as both a fundraising powerhouse and a valuable asset for candidates throughout the country, including appearances with successful senate contestants Joni Ernst of Iowa and Dan Sullivan of Alaska.

Romney also stayed in the public eye through a number of television appearances, which saw the former Massachusetts Governor attack the Obama administration’s foreign policy and provide his take on national issues, such as raising the minimum wage. His popularity even saw a pseudo-revival, with a CNN/ORC poll in July showing that Romney would defeat President Obama 53-44% in the popular vote if the 2012 election were held that day. This can largely be attributed to a buyer’s remorse mixture composed of low approval ratings for President Obama, vindication of some of Romney’s talking points, and image softening thanks to things like the Netflix documentary Mitt and an appearance on Late Night with Jimmy Fallon.

All of this has contributed to speculation that Romney may suit up for a third try at the White House come 2016, a prospect inflamed by recent comments the former governor made to a group of donors stating that he is indeed considering another presidential campaign. While the art of the political revival is nothing new to the American voter, another Romney candidacy so soon after a crucial electoral defeat in the last cycle could spell disaster for a GOP trying to regain mainstream relevance. Were Romney to wade into the fray once more, substantive changes would be demanded not only of his campaign staff, but of the candidate himself to face the unique challenges that would stand between him and the Oval Office.

Romney’s previous presidential effort was saddled with persistent imaging problems that were only exacerbated by a nominee prone to damaging gaffes. This hamstrung his entire operation, inhibiting the campaign from promptly responding to character assassinations conducted by the Obama camp before Romney could even accept the GOP’s official nomination. It obscured Romney’s message and hindered his ability to successfully convey his vision for the country in a way that resonated with the American people. Some of this can be attributed to the natural course of a presidential race, but it would be remiss to overlook the extent to which Romney’s uneasiness on the campaign trail and poor strategic decisions by his inner circle contributed to the lackluster 2012 showing.

Should Romney decide to attempt another run, a shakeup of his campaign’s inner circle would have to occur. This is unlikely to materialize, as Romney is known to place large amounts of trust in only a select group of individuals, and as such has largely kept the same people around him for a long time. One of Romney’s closest aides and speechwriters, Beth Meyers (who also headed his VP selection process), has been with Romney since the Massachusetts State House. While this small circle undoubtedly provides good unit cohesion and trust, the Romney campaign’s performance suggests that not all of the team’s members are best suited for a large national campaign.

Romney would also have to reign in his tendency to become his own worst enemy, limiting the amount of verbal gaffes he committed during the 2012 election cycle. Although he has shown marked improvement while stumping for fellow Republicans in the lead up the 2014 midterms, his improved demeanor at events may simply stem from the fact that his name isn’t on the ballot anymore. If Romney were to declare another candidacy, that nonchalance could vanish and leave the very real possibility that he might regress back to his 2012 self.

A presidential candidate Romney would also have to contend with hard political realities. He would most likely face off against a Democratic heavyweight in the form of Hilary Clinton, who led him 55-42% in the same CNN/ORC poll that placed Mitt ahead of Obama. A more recent Washington Post-ABC News poll not only showed Romney’s gap between Clinton grow to a 17-point deficit, but noted his favorability among select voter demographics has shrunk since 2012.

The 2016 Republican primary season is also shaping up to be just as drawn out as 2012’s, but with a longer list of qualified candidates. Romney would be hard pressed to convince his party to nominate the man that lost the presidency last round over a myriad of successful governors and name-grabbing senators. The GOP brass has shown little initial support for a Romney revival, and former Florida Governor Jeb Bush could be tantamount to a donor vulture should both men decide to run for the Republican nomination. The return of Mitt would also not bode well for a GOP struggling to show it has new and innovative policy solutions, an endeavor that would be undercut by the nomination of an old face.

Upside can still be found in a Romney candidacy, however. In a recent speech, he outlined what the GOP’s three core principles ought to be heading into 2016 (and what would likely form the guiding mantra of his platform should he take the plunge): ensuring a safer world through American economic and diplomatic muscle, increasing economic opportunity and lifting people out of poverty. This platform not only signals a major shift in tone for Mitt on poverty, but allows him to breathe new life into themes touched upon during the 2012 campaign.

Events abroad such as Russia’s annexation of the Crimean peninsula and the rise of ISIS in Iraq have made Romney’s critiques of the Obama Doctrine appear more credible. Furthermore, his pivot towards income inequality and economic opportunity are indicative of someone seeking to genuinely connect with more of the American electorate. It is a positive sign that Romney not only feels much more comfortable in his own skin, but desires to address issues that aren’t traditional GOP-Establishment talking points, offering credible solutions in step with the rebrand the Party has sought in the wake up 2012.

Having the most recent face of electoral defeat become the standard bearer for what is supposed to be a fresh approach is a tough sell to make. While that status carries significant baggage, it could contain hidden benefits. Opposition research on Romney has been used up, and whatever skeletons were in his closet have been aired out before the American people. If such attacks were to resurface, they may come across as old news—salvos devoid of their original lethality in support of a trite caricature.

Romney has also struggled greatly and failed. If he were to run again, he would have to claw his way to the nomination in an uphill battle against what is shaping up to be a challenging primary crowd. It would be an underdog story with a slightly more empathetic Mitt humanized because of his previous shortcomings, and if he manages to win it would be because he earned it through political grit. Whether or not that is a plausible scenario is uncertain, but one thing is sure—America can’t resist a good comeback.