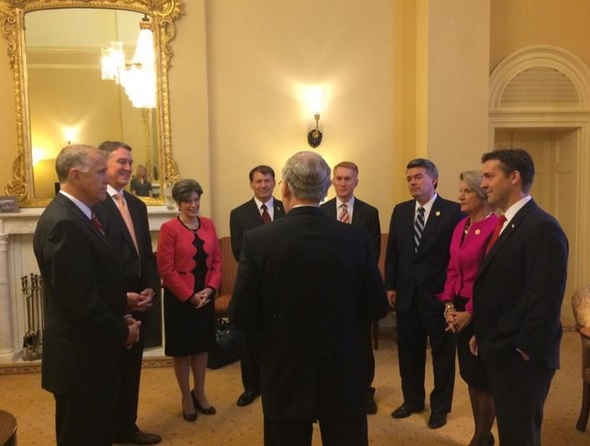 After months of campaigning and millions of dollars spent, Election Day 2014 has finally come and gone, leaving the American public with a GOP controlled Senate and the largest Republican majority in the House since the 1940s. The Republican Governors Association will also be adding some new faces to the mix after a surprising string of gubernatorial victories across the country, including solidly blue states like Illinois, Maryland and Massachusetts. While some races remain too close to call, the bigger question on the public’s mind is what the Republican surge means for the immediate future and what exactly the next step will look like for the GOP and the country.

The first thing that ought to be done with a Republican held Congress is for the Party’s base to temper its expectations on what can be accomplished. While a complete repeal of the Affordable Care Act is a romantic notion, the likelihood of it materializing is next to none. What should be expected are smaller, but no less important, steps forward across several policy areas including energy, taxation and economics, immigration and health care.

With progress in the energy field overdue, revisiting the Keystone XL Pipeline should come as no surprise. The Pipeline’s approval would likely have to be tied to some form of new environmental regulation, presumably increased restrictions on coal emissions, so that both the GOP leadership and the Obama administration can claim a win on some front. The Pipeline’s construction would open the safe transportation of crude oil from Alberta, Canada all the way to Texas refineries, creating jobs and revenue for the counties involved while simultaneously fostering energy independence. With the president now worried about his legacy rather than re-election, the prospect of cooperating with congressional Republicans to accomplish affirmative legislation with tangible results may seem more attractive than cozying up to a Democratic base that is no longer of use to Obama, making the Pipeline’s construction an achievable goal for the GOP.

Another area where a push could be seen is over the issue of corporate tax reform. The United States boasts the highest corporate tax rate in the industrialized world, currently set at 35 percent, and the Republicans could finally manage to strike a deal that would lower it. A lower corporate tax rate is appealing to businesses and manufacturers and creates more incentive to keep production within the United States’ borders, as well as more homegrown jobs, services and products. On a deeper level, the U.S. employs a hybrid system of taxation, as opposed to the popular territorial approach utilized by other nations. What this means is that a company based in the United Kingdom, for example, will only pay taxes on domestic income, whereas a U.S.-based company will pay the full tax rate on both domestic and foreign income upon repatriation — in addition to taxation by the host country — meaning that the company will effectively pay taxes twice on foreign revenue. Reforming this system to something more akin to a progressive consumption tax would be beneficial in the long run, but do not expect this to happen in the next two years. Instead, a simple reduction in the tax rate is much more realistic, with a rate as low as 25 percent not being completely far fetched.

Some hot-button issues will have to be tackled too, with immigration reform being a strong contender for the next big legislative debate. In fact, former presidential nominee Mitt Romney has predicted that some type of immigration reform will likely be proposed, argued and passed under the tenure of the next Congress. The question is whether that reform will be piecemeal or comprehensive. In light of the backlash Sen. Marco Rubio received from participating in the notorious “Gang of Eight” negotiations and the lukewarm reception of Jeb Bush’s comments on the subject, a piecemeal approach could be the more agreeable path for a divided Republican Party. Regardless, expect to see measures seeking to tighten border security, streamline the naturalization process, increase transparency and set forth some solution to the plethora of illegal immigrants currently residing within the country that strives to find a happy medium between amnesty and self-deportation.

Although a complete repudiation of the Affordable Care Act almost assuredly won’t happen under the next Congress, lesser modifications to Obama’s signature piece of legislation should surface. A repeal of the unpopular medical device tax is a viable avenue of attack for Republicans. It would largely be a symbolic gesture with little big-picture impact, but could set the stage for larger repeals or more strategic alternative legislative proposals.

Other initiatives to expect include the Trade Promotion Authority, which would both allow the president to conclude negotiations concerning the Trans-Pacific Partnership and attempt to truly pivot to Asia and deal with a China on the rise.

The GOP also netted a sizeable number of governorships across the nation on Election Day, winning decisively in high-profile races like Wisconsin and picking up surprising victories in blue states like Illinois, Maryland and Massachusetts and . Combined with the passage of ballot measures dealing with the minimum wage and the use of recreational marijuana in some states, the Republicans have an opportunity to build on continued progress at the state level on issues where Washington has idled and create a stark contrast in effectiveness, thus making a compelling case for more state autonomy.

Consider the debacle surrounding the launch of Obamacare’s online enrollment, where it was the state run exchanges that offered the most successful operations. Although the rollout hiccups have largely been fixed, Americans remain skeptical of the program, and health reform at the state level continues to be more popular with Americans than what has been accomplished on the national stage. For example, Gov. Mike Pence has created an alternative to Medicaid in Indiana, enjoying favorability among residents and projected financial solvency. The Healthy Indiana Plan 2.0 seeks to update the popular original HIP with a conservative expansion of Medicaid that would place more enrollees in private insurance, create a health savings account that enrollees could pay into, incentivize unemployed enrollees to pursue adequate work opportunities, seek to limit ER over-usage and attempt to lower premiums.

Even in legislative areas where progress has been made that isn’t exactly in line with a Republican platform, like the expansion of the minimum wage, recognition of same-sex marriages or the legalization of medicinal and recreational marijuana, the fact should not be overlooked that progress itself has been made. In an age of often bitter Congressional gridlock, this fact makes advocacy for less federal meddling a little more reasonable, and the message of an updated emphasis on the benefits of a smart federalism all the more receptive—something Republicans of all stripes can get behind.

With the gubernatorial gains in traditionally blue states made this election cycle, the chance of expanding the Republican message arises, however slim. Contingent on the performance of new governors like Charlie Baker in Massachusetts, the door could be cracked open to a return of fifty state campaigns, something the GOP should take a hard look at if it truly wishes to pitch a larger tent over the American electorate. At the very least, continued performance by Republican governors only adds to a list of potential 2016 candidates that contains names like Chris Christie and Scott Walker and will no doubt factor into the eventual consolidation of the now-fractured field.
Republicans now have a chance to finally show the American people that their brand of politics not only contains actual solutions to the problems facing the nation but also can stand in clear opposition to the Democratic method. As long as they use their newfound power wisely and can demonstrate an ability to govern effectively at both the national and state levels, the Republicans may be looking at a clear path to the White House come 2016. Whether they can accomplish that remains unclear, but one thing is certain: the ball is squarely in the GOP’s court.