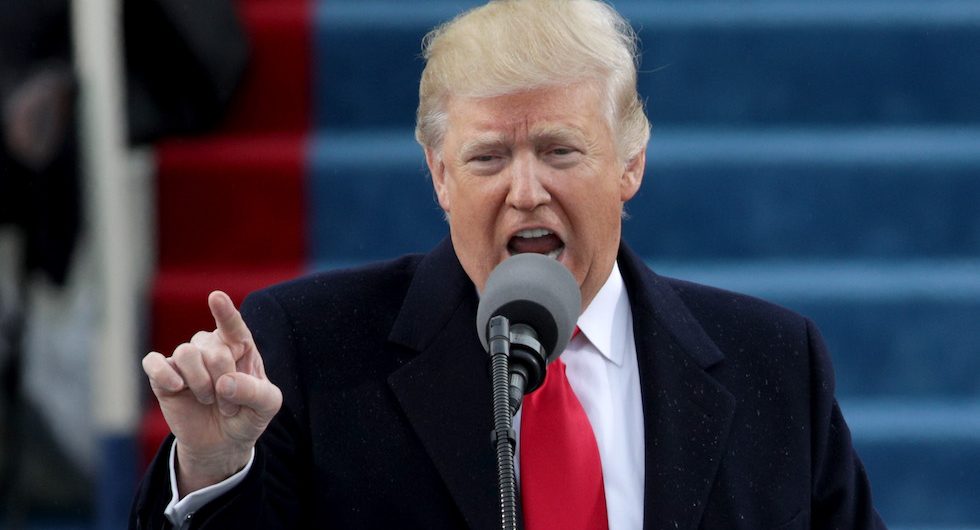 With approximately two years of the Trump presidency having already elapsed, most have, by this point, become more than familiar with the pattern of the new, Trump-driven news cycle.  Every few weeks, some kind of tragedy, controversy, or other drama will unfold, the president will inevitably make a tone-deaf or divisive remark which will briefly set the mainstream media in an uproar, and then the next scandal begins.  So the cycle goes on and on like a Mobius strip.  Every time such a situation makes the headlines, discussion regularly turns to the question of whether Donald Trump will ever rise to the occasion and strike a tone of genuine unity.  Journalists and pundits constantly wonder if Trump will ever truly fill the role of “Consoler-in-Chief” or “Uniter-in-Chief.”  Looking at his record, the obvious answers seems to be no.

Generally, Trump will respond to a controversy by reading a relatively inoffensive pre-prepared statement, often off of a piece of paper or teleprompter.  While some may find this initial response lacking in genuine empathy, most will find it acceptable.  However, time and time again, over the course of the next several hours, days, or weeks, by tweet or by rally, the president will return to his typical style of division and bombast, sometimes co-opting whatever issue was in question as a partisan talking point and erasing any optimism that the President might actually act magnanimously.

This repetitive process can be seen in Trump’s reaction to Dr. Christine Blasey Ford’s allegations against now-Justice Brett Kavanaugh.  While the President at first spoke little about Ford besides calling her testimony “compelling,” as the saga went on, he began to attack Ford’s credibility, making light of her charges at a rally.  In similar fashion, when mail bombs were sent to a number of Trump’s political enemies, including CNN’s offices in New York City, Trump called for unity, yet not soon after doubled down on his belief that the press is the enemy of the people.

By now, this chain of events has been repeated so many times, one would think that most observers would have come to grips with the President’s temperament and moved on from seriously considering that a fundamental change of tone is possible; yet such ruminations still seem to persist.  Often it will be remarked that the president is unstable and unpredictable, implicitly suggesting that he might one day surprise America.  On the contrary, Donald Trump has proven to be nothing but predictable, reliably choosing whatever course of actions he believes to be the most self-serving and personally advantageous, decorum and unity be damned.  This pattern of behavior appears to be an inseparable piece of Donald Trump’s identity, and at 72 years old, any kind of meaningful shift in temperament would appear next to impossible.

Donald Trump’s entire worldview is centered on winners and losers.  Over his entire life, it has become more than apparent that decency and respect are non-entities to him.  He blasted the state government of California as they struggled to combat massive forest fires: perhaps because California is a “blue state” that didn’t vote for him.  He did not care to work towards actual unity after the recent string of bombing attempts, maybe because that might have de-energized his base on the eve of the midterm elections.  In response to a question about how he attacked Dr. Ford, Trump retorted: “It doesn’t matter, we won.”  He had the White House flag raised from half-mast as soon as possible following John McCain’s death, either because of a lack of empathy and understanding, or because the deceased Arizona senator was his perceived political enemy.  Trump equivocated after the white nationalist rally in Charlottesville, Virginia, because he was afraid of alienating supporters.  And after a confession and DNA evidence exonerated the Central Park Five, Trump refused to apologize for calling for the group’s execution because he would have had to admit he was wrong.

After a notable escalation of divisive comments and actions leading up the midterm elections, some have claimed that the President has attempted to strike a more conciliatory and bipartisan tone.  Ignoring the continued if not increased hostility Trump has shown towards the media since the midterms (his spat with CNN’s Jim Acosta being a prime example), along with his continued desire to see his political opponents imprisoned, the President has legitimately made statements calling for bipartisanship, namely his kind words for House Minority leader Nancy Pelosi.  Even this, however, can easily been seen through a lens of political expedience, with Trump trying to create examples of pragmatic, bipartisan legislation  to which he can point back during his 2020 campaign.

At this point, all politically engaged people, especially media pundits, should not be shocked that the President responds to situations like this in the way that he does.  For those disappointed by Trump’s behavior, clinging to feeble hopes that the President will somehow rise to the dignity of his office is pointless.  Donald Trump is fundamentally incapable of magnanimity.  At his core, the current President of the United States is an obstinate, selfish, vain, mean-spirited, small-minded, and above all else petty individual, and it is well past time American society collectively accepted that.

That is not to say such behavior has not served Donald Trump well in his time in politics.  On one hand, the President’s approval rating has consistently remained low, between 40% and 50%, and the midterm elections did see Republicans lose ground in the House.  However, Trump did rise all the way to the office of the presidency and maintains virulent support within his party, both from legislators and the electorate, all while consistently acting in this manner.

The way in which one addresses the President’s perhaps less-than-fortunate demeanor can admittedly seem difficult to navigate.  One danger that can easily ensnare commentators is decorum policing, or simply attacking words and tactics which seem impolite or improper.  Often in fretting over words, the mal-intent behind the words is glossed over.  We also need not desensitize ourselves to such actions: convincing ourselves that immature behavior is acceptable of a president, yet feigning shock and surprise whenever the President does or says something previously considered out of bounds for an elected official, is quite frankly a waste of time.

The next time the President appears on television and reads some kindly phrased words off of a teleprompter, the American public ought not hold its breath hoping that Donald Trump will be able to stick to the message his staffers have crafted for him.  Trump has done little to nothing over the course of his presidency, and even before his rise in politics, to suggest that he possesses the capacity to do so.  Class and common decency are things that a teleprompter cannot fake.