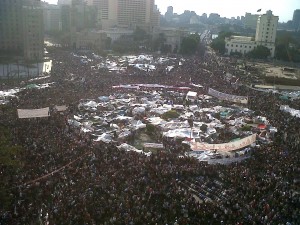 Two years ago, unified opposition against the Middle East’s authoritarian regimes characterized the Arab uprisings. All the slogans shared the underlying mantra, “We want change”—change of the regime, change of the economic status quo, change of the political oppression, and change of the fearful silence.

Two years later, however, unified opposition has transformed into internal fragmentation and polarization in each country, whether they have entered a period of transition—like Tunisia, Egypt, and Libya—or not. Syria’s uprisings have spiraled into civil war. Meanwhile, in Jordan and Morocco, tensions fester below the surface as some citizens are increasingly displeased with the cosmetic changes that their respective governments implemented to quell the 2011 protests. Egypt’s transition remains in the international eye while Tunisia, where the uprisings of the Arab world began in January 2011, has faded almost wholly from global public discourse. Despite their differing face time in the media, the Egyptian and Tunisian transitions are plagued with similar sectarian polarization that, for many Westerners, seemingly denote the failure of the so-called “Arab Spring” in instituting democracy throughout the Middle East. Yet, elections, constitution writing, and continued societal debate in Egypt and Tunisia underscore an evolving reality that was virtually impossible under Mubarak and Ben Ali. However, the internal sectarian polarization in both countries threatens their respective transitions to democracy insofar as it divides the nations that, only as unified fronts, were successful in overthrowing repressive dictators.

The sectarian divide has manifested differently in the last two years, being more apparent in Egypt than in Tunisia. Moderate, liberal, and secular Egyptians criticized the Muslim Brotherhood for its reluctance to join the 2011 uprisings, its alleged politicking with the widely unpopular Security Council of Armed Forces (SCAF), and its push to hold the country’s first post-Mubarak elections before rewriting its constitution. Meanwhile, Tunisians—whose country, before the uprisings of 2011, was considered one of the more liberal in the region—were hesitant to accept Ennahda’s rising leadership. Both Egyptians and Tunisians questioned the parties’ self-proclaimed modernized form of political Islam. Through passive political participation and social programs, however, the Muslim Brotherhood and Ennahda garnered the necessary support to win elections, successfully attaining control of their respective governments.

In an attempt to maintain their newly acquired power, especially after being politically oppressed for decades, both the Muslim Brotherhood and Ennahda have confirmed—and, to some extent, exacerbated—worries that premature elections would lead to another oppressive, overreaching government. The Muslim Brotherhood has demonstrated worrisome tendencies resembling those of SCAF and Mubarak. Most notable, President Morsi assumed SCAF’s unlimited, controversial authority in June 2012 and then, late last November, decreed essentially absolute power for the president. Although he rescinded the latter decree, Morsi has thus far failed to take moderate, liberal, and secular voices into account, particularly in regards to the constitution. Similarly, the Ennahda-controlled government and constitution-writing body have exhibited more conservative tendencies than those with which they campaigned during elections. The National Constituent Assembly, which was elected in 2011 to write the constitution, failed to include safeguards protecting fundamental freedoms (namely those of expression and conscience), women’s rights, and anti-discrimination. Instead, the constitution depended more heavily on shari’a than initially expected.

The Islamist framework of both parties has added a sectarian element to the national divisions, which are inherent in times of political change and transformation. Like Mubarak’s National Democratic Party and Ben Ali’s Rally for Constitutional Democracy, the Muslim Brotherhood and Ennahda have become the dominant parties struggling to maintain power while vying against moderate, liberal, and secular opponents for political legitimacy. Therefore, neither Islamist government has made substantial strides to rectify the failing economies, address the unemployment rates, or alleviate their respective country’s poverty—all of which were among the factors that fueled the 2011 Arab uprisings. These shortcomings have rendered a perceived failure of the “Arab Spring,” with Islamist and secular parties pointing the finger at each other.

The immediate secular polarization, however, does not hamper the possibility of long-term democracy in Egypt or Tunisia. In the short-term, any form of fragmentation—sectarian, political, economic, or social in nature—will surely prolong the transition from authoritarianism to democracy. The 2011 Arab uprisings created a new space for public debate and discourse in Egypt and Tunisia, thus enabling the rise of various opinions. The very existence of this outright, apparent fragmentation signifies a shift from the Mubarak and Ben Ali regimes, under which critics of the government were jailed, tortured, and/or killed—as is still occurring in Syria, Jordan, and Bahrain. In other words, this evident societal polarization highlights an increased public discourse once impossible in the Middle East. Rather, the true danger to democracy rests in the long-term continuation of such divisions, which will occur unless Islamists and secularists alike begin to work towards the changes once called for two years ago.

1,135 thoughts on “The Possibility of Democracy in Fragmented Arab Societies”