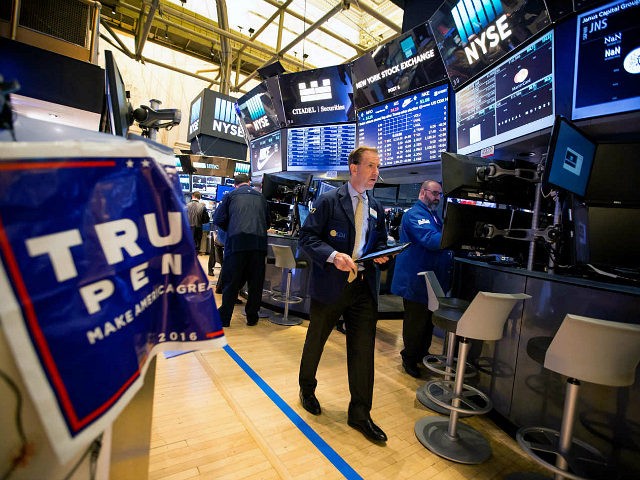 Florida was falling. So were all of the battleground states. The so-called firewalls in Wisconsin and Virginia, too, were up in flames. It was a catastrophic failure of the Democratic machine – a blistering surprise delivered by a surge of Trump voters that lifted him from the depths of what had been believed to be almost certain defeat into a resurgent, euphoric victory. Few had expected it (disclaimer: including me) – and certainly not the financial markets. According to analysts, they’d priced in a Clinton win long ago.

But when Trump won, something interesting happened.

Overnight, as it became clear Trump would emerge the winner, the Dow went into an all-out free fall. In just hours, it plummeted 800 points while the futures markets collapsed alongside it in a frightening devaluation. But then the next morning rolled around, and markets surged forward, carried on by some hidden breath of steam that no one knew existed.

The question remains: why? If the markets had theoretically priced in a Clinton victory, they should have been shaken to the core the next day. The candidates’ policy proposals were radically different; any bets placed on companies that would benefit under a Clinton presidency were suddenly rendered null. Trump himself has been incredibly vague on what many of his actions as president might actually be – and markets hate uncertainty. That leaves at least two explanations: either the markets believe that Trump will be significantly less radical in his proposals than what he suggested during his campaign, or that they were betting far less on a Clinton win than what most had originally believed.

The data is volatile and murky, and we’ll probably never know the real answer. But there are a couple of important points that might help illustrate what happened. The first is that Trump has promised to significantly lower corporate tax rates. In a basic sense, that’s already great for stocks, since it raises earnings per share across the board. The U.S. corporate tax rate already often gets panned for being too high, so a Trump presidency might have excited investors that want to see it lowered.

Second, as The Atlantic points out, it appears that investors were less inclined to make bets against the market overall in the wake of Trump’s win, focusing instead on selling off particular industries that would take on water under his administration. Those losses were offset by big gains in the opposing direction – stocks that would thrive under deregulation and conservative environmental policies. Healthcare and renewable energy slid, but oil companies, banks, and pharmaceutical companies led the rally. In the end, it evened out, with the markets rising even further than they had before.

This could, in the end, be somewhat ephemeral; since he’s been elected, Trump has kept his cards close to his chest, and it’s very possible that his real policies could differ significantly from what he spoke about during the campaign. The markets themselves are sensitive entities, though, and even if they’re steady now, a number of radical moves on Trump’s part could feasibly send them into a tailspin. But, at least for the moment, it seems that the unlikely rally behind his election will only further add to the list of surprises this year.