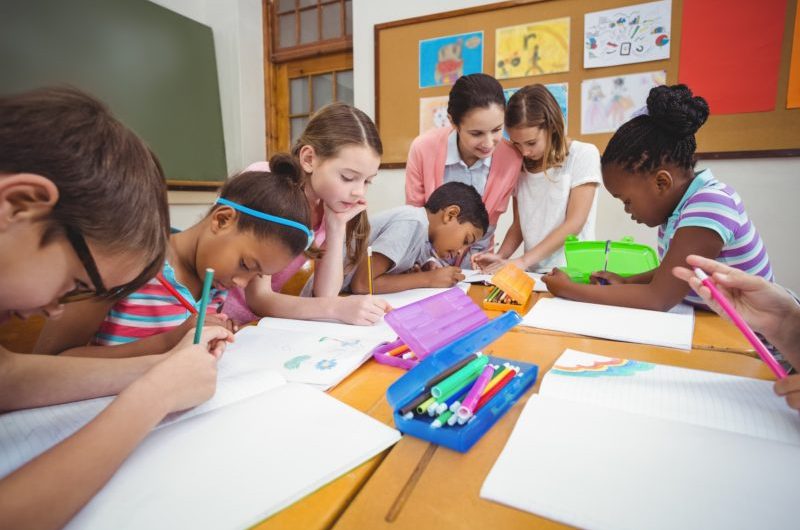 Of all government-funded projects and services, the public education system is one of the most important – and not just for individual students. Access to a robust public education gives students lifelong skills, increased job prospects, and a greater likelihood of future family stability and financial independence. In the aggregate, a more educated population (on the local, city, state, and national levels) leads to improved public health, civic engagement, and economic prosperity, as well as reduced crime and unemployment.  Undeniably, public education has the power to help everyone.  For many students, public school has the unique ability to actually facilitate the “American dream” that drives our national consciousness – the ability to take what you have and turn it into something better, to transcend the economic background into which you were born. But for many others, our schools are not pushing them closer to that goal. For some, particularly students of color, it makes achieving that dream even harder. The American public education system is lacking – and it’s disproportionately hurting marginalized groups. The effects of institutionalized racism and segregation still reverberate in American public schools, and they’re not going anywhere without substantial systemic changes.

Contrary to its generally positive perception in the eyes of most Americans, Brown v. Board of Education has not been entirely successful at integrating American public schools. Between the mid-1960s and late 1980s, integration increased and the achievement gap between white students and students of color was decreasing: but after 1988, the Supreme Court (and thus, the nation) stopped focusing on desegregation, and integration statistics began to regress. Currently, school segregation levels are about the same as they were in 1968. And our national achievement gaps make it clear that black and Latino students are not receiving the same quality of public education as white and Asian students.

The culprit? Funding inequality. Unsurprisingly, government funding – mainly from states, but also from the federal government – has a marked impact on the quality of public schools. School districts with higher poverty rates collect less money in tax revenue and thus have smaller school budgets. Logically, it would make sense for the state and federal governments to provide more of a subsidy to the districts with greater need, but they don’t. In fact, in more than half of states in the U.S., the poorest school districts actually receive less state and local funding than wealthier ones. This means they miss out on the best teachers and guidance counselors, and opportunities like AP courses and early education programs that can give students a leg up. This can also mean a lack of crucial support for poor or disabled students, or those learning English as a second language. Frequently, it means kids of color are being systematically excluded from the opportunities and programs that so often lead students to success later in life.

Sheryll Cashin, a law professor at Georgetown University and a former clerk for Supreme Court Justice Thurgood Marshall, explains how today’s public education system actually facilitates inequality instead of enabling students to combat it:  “We have replaced the old Jim Crow caste system, which was solely based on race, with a new caste system at the intersection of geography, race and poverty…So the average black or Latino child in public school today tends to attend a school that is racially segregated…for Asian and white kids, they tend to be in schools that are middle class. Public education is a facilitator of inequality in a way that I think is very unfortunate.”

Despite the impact of public education on American children (and subsequently, American adults), the persisting problem of school segregation often does not garner widespread attention – partially because many people do not even know to what extent our schools are still segregated, and partially because white and wealthy parents don’t want to bring attention to it. Even white liberals often fail to support progressive policies in issue areas like public schooling and school choice, because they perceive that redrawing school district lines would disadvantage their own children. White parents have long been a part of the problem: in the 1950s and 1960s, when the government began enforcing the Brown decision by “busing” kids of color to white schools, middle-class white parents began protesting. Today, many white parents who live in low-income or non-white school districts send their kids to private schools, indirectly perpetuating the problem of school segregation.

Some of the first busing protests took place in New York City in 1957. Today, when NYC public schools are among the most segregated in the country, school integration is still not a priority. In a 2017 essay, three city council-members, including Ritchie Torres of the Bronx, acknowledged examples of both progress and stagnation in the city’s approach to integration. They point to the forward-thinking  “controlled choice” models, like the one released last year in School District 1, which include targeted efforts to get parents to think differently about the school options for their students, as important steps forward. But they also write that “there’s a lot more we must do” at the elementary, middle, and high school levels; that we must “actually do the hard work of culturally-competent education (with diverse teaching staffs), of surfacing implicit bias, of confronting disparities in school discipline. It is no easy task…but it remains an essential one.”

Of course, different geographical areas need different integration plans. Connecticut’s capital city, Hartford, is made up of mostly Black and Latino families, and surrounded by white suburbs. About ten years ago, the state implemented a program that used many of the same principles as NYC’s new “controlled choice” plan – they launched a concerted, hard-fought advertising campaign directed at convincing white parents that sending their kids to integrated schools is a good idea. Voluntary integration – no “forced busing” of the kind that white parents were told to fear decades before. And it works. In 2007, 11% of Hartford kids went to integrated schools; now, nearly half do.

To do this, Hartford created a $2 billion program to create several magnet schools: specialized public schools where students can focus on performing arts, environmental sciences, technology, civic leadership, engineering, sports and medical sciences, and other subjects. They then invited white parents – those people who have historically made school integration so difficult – to come see the opportunities available for their kids at Hartford public schools. Consistent outreach made the schools an option for wealthier families who might have otherwise sent their kids to private school, but word of mouth made them desirable. Even if they didn’t choose to send their children to Hartford public schools out of a desire to support a more equitable school system, many parents realized that they wanted diversity; they wanted their kids to be educated around kids who were different from them.

Of course, the system is not perfect – currently, it is far from reaching all city students – but studies show that it is beneficial for city and suburban students alike. Magnet high school students, who enjoy state-funded, state-of-the art science labs, rehearsal spaces, and facilities like outdoor gardens, reported “less racial tensions, fewer classroom disruptions, and greater aspirations for college” than their non-magnet school counterparts. They do better on statewide achievement tests, and report greater positive influence of adults on their college expectations.

Hartford is an example of a smaller sized project, as its population is significantly lower than New York City’s, but it serves as an example for other cities of any size throughout the country. We as a country can and should be setting aside more funding for low-income school districts, whether they plan to create integrated schools or simply boost historically underfunded and under-served communities. When we dedicate resources to funding and supporting schools that are integrated on purpose – creating both diversity for diversity’s sake, and an environment where low-income kids and kids of color can thrive – we can kick-start a massive paradigm shift that will (hopefully) lead to a more equitable school system, and consequently, a more equitable society.