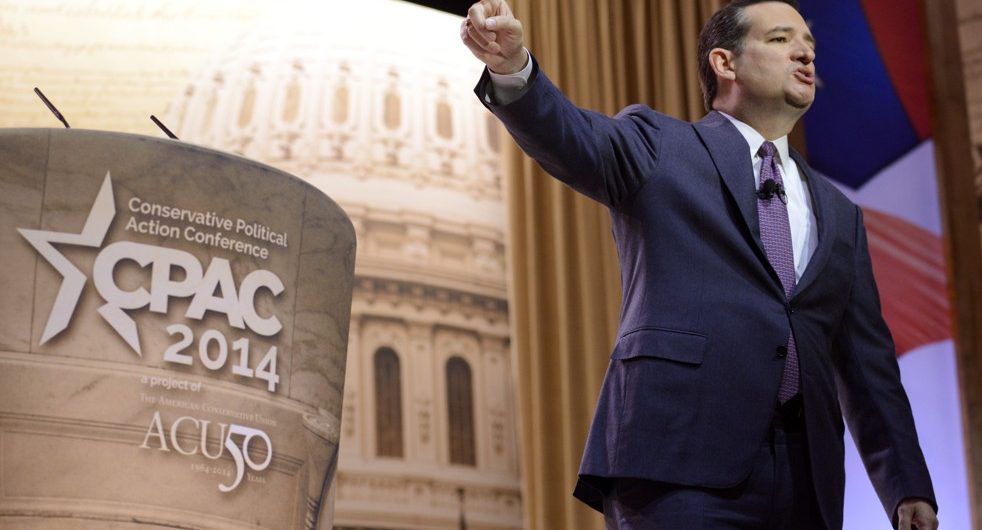 It comes as no surprise that the Republican Party has been labeled the party of ‘no’ over the past four years.  A party once ruled by established, pragmatic, old school politicians was rocked when Barack Obama cruised into the oval office on what the far right saw as a wave of ultra-liberal ideologies, threatening to destroy the basic foundations of the United States.  This fear energized an extreme right wing of the Republican Party into forming a coalition called the Tea Party.

As of this current Congressional session, there are still 48 members of the House along with 15 members of the Senate who are members within the Tea Party Caucus.  With the sudden influx of radicalized conservatives, thanks to a healthy combination of fear mongering, gerrymandering, and unlimited campaign expenditures, it should shock no one that the 112th Congress was arguably the most politically polarized Congress since Reconstruction.  The influence of these ideological puritans of the far Right has threatened the stability of the United States and unless suppressed, threatens the future strength of our society as a whole.

In August 2011, we saw a debt-ceiling showdown that would only be a preview of what havoc House Republicans would soon cause.  What used to be a somewhat routine vote to extend the debt ceiling, especially in a time of economic recovery when government revenues are low and spending should not be curtailed, turned into a fiasco caused single-handedly by the House GOP for demanding immediate deficit reductions.  The crisis was averted two days before the debt ceiling would have been breached thanks to an agreement that would incur future cuts.  Unfortunately, the House GOP had done significant damage to the financial stability of the nation: Standard and Poor’s downgraded the United States’ credit rating and stock markets saw the most unstable week since the economic crisis began in 2008.

The spending debate continued with the failure of the Gang of Eight, a group of legislators established as part of the 2011 Budget Control Act in the wake of the debt ceiling crisis, to produce a legitimate deficit-reduction/tax bill, leading to the enactment of Sequestration.  These automatic spending cuts were allocated to social programs and the Pentagon, valued by the Democrats and Republicans, respectively.  In 2013, a continuing appropriations bill was required by October in order to avoid a government shutdown.  Democrats compromised by allowing the sequestration cuts to stay in place, while far-right Republicans, such as Ted Cruz (R-TX), demanded a delay in the implementation of the Affordable Care Act (Obamacare) which was to take effect October 1st.  The Democrats produced a unified front against Cruz and the right by claiming that the law had been passed, tested in the courts, and would begin regardless of a potential government shutdown.

Speaker of the House, John Boehner (R-OH), refused to allow a vote for a continuing resolution even after the Senate had already passed it, despite Mr. Cruz’s attempt at a pseudo-filibuster.  As the government shutdown began, with 800,000 Americans facing furloughs and millions of others affected, the GOP pointed fingers at the President, the Democrats, and each other as their approval ratings plummeted.  Finally, Speaker Boehner learned his wing was fighting a losing battle and he finally broke his self-imposed Hastert Rule (a rule where a bill will be brought to the House floor only if a majority of the majority party allows for it).  On October 16th, a clean continuing resolution that would fund the government through mid-January and stave off the debt-limit until late February was passed.

The right wing of the GOP ultimately caused enough considerable damage to the United States’ fiscal credibility and ability to function that the more pragmatic party leaders finally began to stand up in the face of the far right.  Many Americans consider the government shutdown last year to be the closest we have gotten in quite some time to defaulting on our debt, which would have happened only a week or so after the shutdown ended, however few know what really happened when the debt-limit was to be hit a short time ago in mid-February.

The new debt-ceiling saga began in the House where the GOP attempted to attach a number of components to raising the ceiling (military benefits, Keystone pipeline approval, Obamacare delay, etc.) with each draft failing to gain enough support by the GOP collective.  Shortly before a two-week recess in the House, Speaker Boehner finally caved and passed a clean debt-ceiling raise with Democratic support and sent the bill to the Senate.  Many inside and outside of Washington welcomed this development as a sign of pragmatism much needed in this stagnantly partisan city.  What happened in the Senate next was extraordinarily alarming to anyone who thought the GOP might make an attempt at governance.

Senator Ted Cruz decided to file a filibuster.  Normally this would not be so catastrophic, however, were the filibuster to succeed, the bill would have been sent back to the House where the members had already left Washington on a two week recess, thereby forcing the United States to default on its debt.  The filibuster now meant that the GOP had to come up with 5 votes in order to reach the 60-vote threshold required.  As the vote ended, Senate Minority Leader Mitch McConnell (R-KY) indicated to Senate Majority Leader Harry Reid (D-NV) that he was falling short of the 5 votes needed and Reid directed the clerk to refrain from counting the votes even after the normal voting period had ended.  After a few minutes of deliberation from the Republicans, a group emerged having decided to band together and throw their collective 12 votes to close debate on the issue, defeating Sen. Cruz’s filibuster.  Among the Republicans to join the Democrats were Sens. McConnell, Cornyn (TX), McCain (AZ), and Corker (TN).

The Senate Republicans who came forward to avoid a default on our national debt and undoubted financial catastrophe should be lauded as important leaders in times of crisis.  However, due to the intransient nature of their own party, it is unlikely the Senate Republicans will be given anything but a primary challenge.  This is the sorry state of the modern Republican Party: one where ideological puritans are accepted and any hint of compromise is seen as a weakness and a concession of principles.

The government shutdown and subsequent debt limit debates are unfortunately not the only area of policy making that has been affected by far right Republican obstruction.  We all remember when Senator Reid went “nuclear” last year. Few, however, realize the extraordinary difficulty caused by the GOP in the Senate that forced Reid’s decision.  The GOP’s incompetence to allow government to govern continued with confirmation hearings.  Under Bush, 91% of all judicial nominees were confirmed compared to just 76% under Obama.  Of 168 presidential nominees that have been filibustered in the history of the United States, 82 were under Obama.  The backlog that has formed in the judicial system is unprecedented and dangerous to a nation that looks to the courts to make ultimate constitutional decisions.

In June 2013, the Senate undertook comprehensive immigration reform that gained incredible bipartisan support in the Senate with a vote of 68-32.  The final Senate tally included 14 Republicans, even with Tea Party star, Sen. Marco Rubio (R-FL), voting in favor of the bill, passing it to the House.  Speaker Boehner caught headlines a few weeks ago by claiming that House Republicans could not trust President Obama to execute the bill effectively, leading to Sen. Charles Schumer (D-NY) to challenge him, calling on the House to pass the bill but hold off its implementation until 2017.  Many Democrats in the House are demanding the bill at least be put to the floor for a vote, with the assumption that all Democrats and 19 moderate Republicans vote for the bill.

The 112th Congress set the record as the most unproductive Congressional session ever, about to be outdone by the 113th Congress.  Perhaps to most this seems like a loss, a sham, and a complete lack of competence, but to some on the right, it might look like a victory.  The danger to the United States does not lie within the way the GOP wants to govern, but with its extremist wing’s devotion to ensuring there is no governing at all.

Although liberals enjoy the civil war waging within the GOP, the party’s inability to effectively govern is inflicting incredible damage to the country.  It is threatening our credit as the world’s benchmark currency, it is clogging the judicial system, and it is rejecting immigrants that have the potential and skill to contribute to our society and economy.  In order to move forward, the leadership of the Republican Party needs to support its defectors who move towards pragmatism.  Speaker Boehner needs to utilize both parties in the House to pass comprehensive legislation that at least has potential to become law, rather than allowing bills from the Senate to die on arrival.  The moderate wing of the GOP also needs to learn how to fundraise for and support its more moderate members.  Ever since the Citizens United court case, a few far right individuals have been able to prop up extremists to challenge party leaders.  Were the GOP to create more barriers to entry for these ideologues, many would be unlikely to make it to Congress to upset the status quo, or what is left of it.  We see this done with changes to GOP presidential primaries but it needs to continue on the Congressional level if the Republicans want to be seen as a party with legitimately productive contributions.

The most recent series of events, including the debt-ceiling showdown in the Senate and immigration reform stagnation in the House, show a dim future for pragmatism in Congress.   Some might argue that both parties are to blame, however the degree to which far right obstruction has inhibited government action is far and away the largest source of our problems.  Even as a self-identifying liberal, I believe the GOP needs to clean up its act for the sake of the stability of the country.