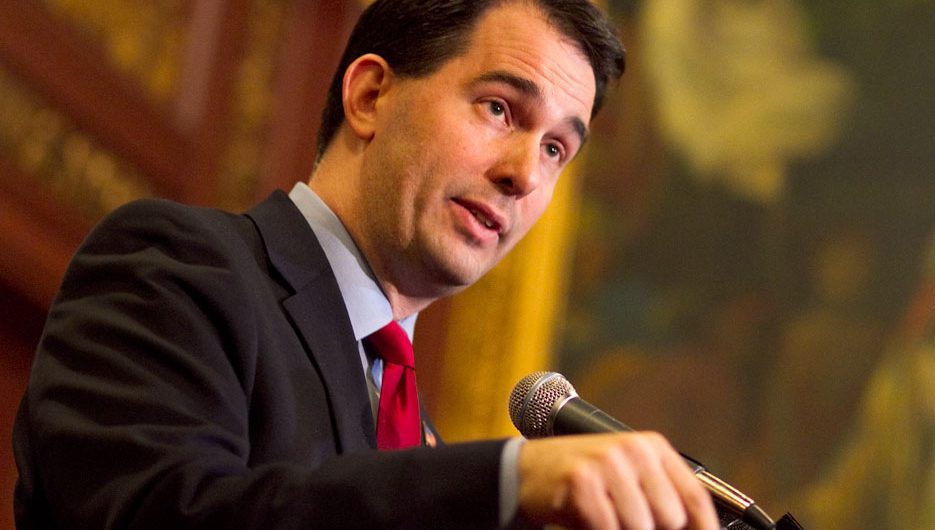 The end of February marked the passage of the annual Conservative Political Action Conference and with it one of the earliest Republican cattle calls leading up to the 2016 presidential election. The convention allots potential candidates the opportunity to test their mettle with the base of the GOP and see if they have what it takes to mobilize grassroots activists. The straw poll released at the end of the event rarely acts as an accurate litmus test for who will win the nomination, but it does act as a benchmark for how certain ideological wings of the Republican Party are feeling about the presidential field. While Rand Paul predictably emerged victorious amid the libertarian-heavy demographic that attends CPAC, hot on the Kentucky senator’s heels was Governor Scott Walker of Wisconsin.

Riding a surge of support after a rousing speech at Iowa’s 2015 Freedom Summit, the conservative heartthrob has been thrust to the forefront of the GOP’s pack as the first serious not-Bush candidate. Boasting a strong record of conservative accomplishment in Wisconsin and the reputation of being an iron clad and battle tested electoral warrior, Walker has the chance of having more staying power than the flavor-of-the-week candidates the GOP saw last cycle. Walker aims to portray himself as a man capable of occupying the ideological middle ground between Jeb Bush and Ted Cruz, trying to appease both the establishment and the base while retaining horizontal crossover appeal to bridge the gap between the libertarian and evangelical wings. If Walker can effectively walk the tightrope of being a fusion candidate, the Republican Party made find itself with one of its most internally unifying candidates it has had in a number of election cycles.

This plays well into the growing thirst within the GOP for victory. A prominent theme of this year’s CPAC was electoral mobilization. A series of panel discussions and breakout sessions dubbed “Activist Bootcamp” emphasized what needed to be done to remedy the failures of the Romney campaign. Select events—like those attempting to develop alternatives to the Affordable Care Act and finding the best strategy to deter the rise of militant Islamic groups like ISIS—were indicative of an effort to step beyond rhetoric and discover actual policy solutions. The younger attendees in particular, with Romney’s failed endeavor fresh in their minds, yearned for a candidate who could win more than one who would be the most ideologically pure. With a Party in transition, Walker may be able to bridge the old and the new and be palatable to those who wish to nominate the most electable candidate as well as those who are wary of a more moderate candidate.

Walker’s persona also offers a unique contrast to both Jeb Bush and Democratic frontrunner Hillary Clinton. He doesn’t come from a family of political renown, isn’t enormously wealthy and isn’t an old face. Like the majority of working-aged Americans he lacks a college degree and though he may face accusations of insufficient education, Walker would never be branded an elitist. The governor talks of shopping at Kohl’s in his speeches and displays his love for the Green Bay Packers routinely on social media. He constructs himself not only as the future of American politics but to the average American, a powerful message juxtaposed to the next-Bush-in-line or Clinton, who often comes across as calculated and aloof. He views himself in bold terms. The dramatic actions his administration has taken in a Democratic state show that the blue collar conservative doesn’t shy away from a fight. He gets results.

Exciting as he may be, Scott Walker isn’t the panacea some may make him out to be. Since being thrown into the limelight, he has made blunders. His decision during an overseas trip in London to “punt” on whether or not he believed in evolution or his equation of staring down union protestors to facing ISIS at his CPAC address indicate that he may not be ready for the intense scrutiny of the national stage or the rigors of a presidential campaign. Walker is also an extremely polarizing figure. His tenure in Wisconsin has already seen him through one recall election which produced intense protests over his divisive right-to-work initiatives. Then there is the pseudo-scandal he was embroiled in concerning fundraising coordination.

Walker is also up against stiff competition. Jeb Bush exceeded expectations at CPAC, coming in at a respectable 5th place in the straw poll and enjoyed a warm reception at a College Republicans event. Bush has emerged as a fundraising powerhouse, consolidating donors at a record pace and solidifying himself as the establishment favorite. Additionally, Bush often leads the GOP pack in polling. Jeb has a turn-key political network with a wide reaching infrastructure and has begun stacking his campaign team to-be with top operatives like noted strategist Mike Murphy. It is still early, but if Walker is unable to find a more stable media stance donors might be scared off before he can build a competitive coalition.

Regardless, the Republican field has begun to slim down and consolidate with Bush and Walker on top of the pile. A March 5th Quinnipiac poll places Walker at 18% and Bush at 16%, well within the survey’s 4.5 percentage point margin of error. Behind them are a slew of candidates ranging from Ben Carson to Chris Christie who all poll in the single digit range. If Walker can maintain his momentum and capitalize on the opportunities the spotlight affords him, the once crowded race may become a two-man contest.