Skip to content
Latest News
The Middle Eastern Cold War
Welcome to the Crypto Age
SNAP for College Students
An Alternative to State-Owned Companies: Why Should the State Have No Economic Possessions?
Texas: Dirty Water and Deregulation 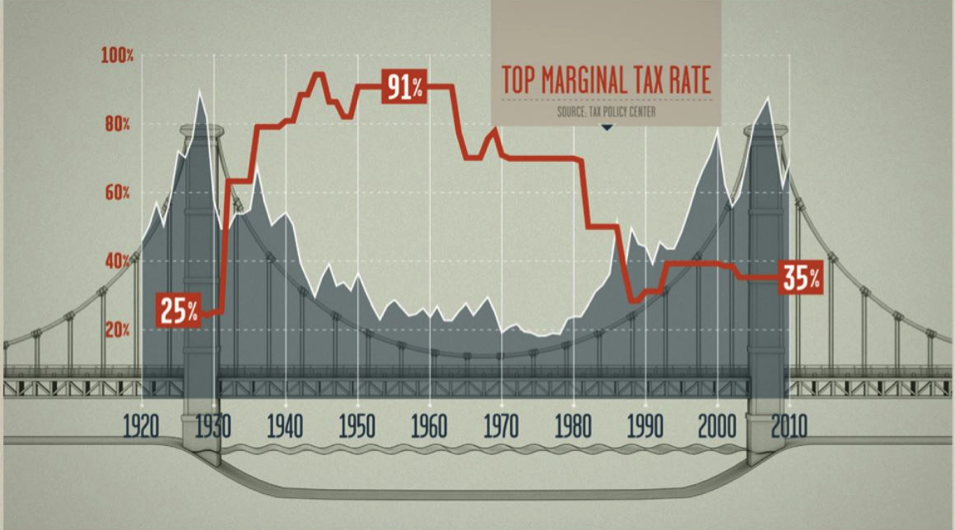 Income inequality has remained a consistent part of recent public debate, manifesting in the problems surrounding wage stagnation and a trapped lower class of America’s “growing” economy. Despite historic job-growth numbers during Barack Obama’s presidency, critics correctly cited a lack of wage growth for lower income workers. Senator Bernie Sanders (I-VT) thrust the issue to the forefront during the 2016 presidential campaign. While the issue garnered a high level of attention, few practical proposals have been offered to combat the problem. Stagnating wages for the bottom half of America’s economy, coupled with skyrocketing wages for the nation’s top 1%, pose a grave danger to the country’s economic and social well-being. If nothing is done to change course, tensions along class and social lines will continue to be exacerbated.

During the mid-1970s, the share of income possessed by the top 10% of earners spiked suddenly, and continued to increase 40 years later, widening the gap between them and the bottom 90%, according to a new study out of the University of California, Berkeley. Today, this top 10% of income holders possess just over 50% of the income in the U.S. Between the mid-1970s and now, an increase in production bolstered the economy; but while the economy has grown, the top 10% have hoarded the benefits of that growth. This concentration of wealth prevents a growing economy from benefiting everyone. Even though most workers in the bottom 90%  generate this growth, they remain with wages stuck at a level that inhibits their social mobility. These arguments, of course, have already been made  by Sen. Sanders and other progressive politicians; what they lack, though, is a thoughtful explanation of why this issue should matter to everyone who desires a sustainable economy.

Income inequality traps those at the bottom. Unlike other issues of systemic injustice, issues of economic inequality like this one lack agreeable solutions because of the “haves and have nots” nature of capitalism. Influencers, many of whom comfortably reside in the top 10% of income earners, see no reason to improve conditions for those at  the bottom, because the betterment of  conditions threaten the comfort of the top 10%. In addition, the issue of income inequality simply exacerbates other social and economic issues at play in modern American life; it’s no secret that much of the wealth disparity in this country exists along racial lines. Wealth and income are different measurements, but the hyper-concentration of each results in similar tensions. While I’m not suggesting that the top 10% is all white and the bottom 90% consists solely of people of color, wealth and income in the country do split decisively along racial lines. The Institute of Policy Studies’ 2016 study says that average household wealth in a white household is $656,000, dropping to $98,000 in a Latino household, and $85,000 in a black household. With many other issues defined by race, such as mass incarceration and immigration, not to mention the blatant outpouring of unprovoked racism in Charlottesville earlier this year, solving the issue of income inequality could go a long way on the path towards social justice that’s still being fought in this country.  If African-Americans and Latinos are meant to hold economic parity with whites, their path towards justice in the aforementioned areas could prove smoother. Solving income inequality shouldn’t be viewed as an alternative to racial and social justice, but merely as a stepping stone on that long journey.

In addition to the social justice aspects of an issue like income inequality, the potential economic benefits should persuade those worried about losing their economic advantage. Opening economic and social ladders to those trapped in the lower-class provides those citizens with more purchasing power, thus giving them more economic resources  that they can use to purchase goods and services provided by the upper 10%. In the long run, this proves to be a win-win scenario for all those involved: the upper class can profit off of the new spending power garnered by the lower-class, who also now possesses the possibility to climb the economic ladder.

Additionally, income and wealth inequality of this magnitude doesn’t  only hurt those trapped in a cycle of poverty now, but it also kills the American Dream going forward. The same individualism championed by conservatives as a hallmark of American freedom suffers because of this disparity: how will immigrants on distant shores view America if their fellow countrymen who make the journey here can’t obtain a decent standard of living? Any excuses fall to the wayside when considering the long-term damage this problem could have on the future of the country.

Furthermore, elected officials’ apathy towards this issue is illogical, considering the voters at stake. Offering economic solutions that place a vast number  of income earners in the country on a more equal playing field opens the door to a part of the electorate whose allegiances appear unchanging. Those allegiances  could shift if an adequate solution to the squalor of lower-class life was put forward. In the words of Bill Clinton’s campaign manager James Carville, “It’s the economy, stupid.” While social issues remain important—perhaps critical—to some voters, economic issues turn voters out like no other.

Considering that these implications affect not only those trapped at the bottom, but also limit the growth of America as a whole, income and wealth inequality require reasonable solutions now more than ever. First and foremost, an increase to the minimum wage must be enacted. A handful of cities, such as New York, Seattle, and Los Angeles, have already approved an increased minimum wage, typically implemented in stages to adjust for inflation. Although the long-term effects of this policy are yet to be seen, enough cities and states are moving in this direction, and those that don’t will be left behind. People will move to areas of the country where they can earn more, potentially decimating economies in areas where the minimum wage isn’t raised. Rather than risk being left behind, and anticipating a lack of action on the federal level, cities and states should push forward and increase their minimum wages. The slow and steady implementation of this policy proves vital, however; jumping from a $10.00/hr. minimum wage to a $15.00/hr. wage overnight would send the economy into shock, likely leading to massive unemployment. Instead, by raising the wage in stages, the economy can adjust naturally and limit any potential damage.

Also, those at the top must pay their fair share in taxes. Sen. Sanders and Donald Trump ran for president on a similar populist appeal, promising to fight for fair trade with an emphasis on the lower-middle class white voter. While Sen. Sanders failed in his bid for the Democratic nomination, President Trump has yet to implement policies benefitting this group of voters so closely tied to his campaign. For example, his latest tax plan, analysts say, would benefit those at the top the most, while having, at best, insignificant benefits for middle and lower class families. What’s more, the tax cuts run the risk of increasing the national debt; similar cuts were made under Presidents Reagan and George W. Bush  during recessions, and both  added to the debt. President Trump advertises these cuts as a way to boost economic growth, however, they would be coming during a time of economic growth, thanks in large part to policies implemented under President Obama. Skeptical that the economy can grow much faster, experts expect that the only result of these tax cuts would be a huge cut to the uber-wealthy and an increase in the national debt. Too few specifics about the plan have been provided to understand the potential magnitude of the cuts, but they will almost certainly not benefit Trump’s loyal base of supporters.

Income and wealth inequality hold incredible consequences for the country. A lack of equality not only highlights but also widens the already-present divisions in America’s social landscape: existing mostly along racial lines, income and wealth inequality threatens true racial progress and the American Dream through the message it sends to other countries. While these threats are dangerous, those who don’t suffer from the inequality have reasons to act for more equitable economic policies. Hopefully through the implementation of these policies, the economy can become a fairer playing field for all who participate.