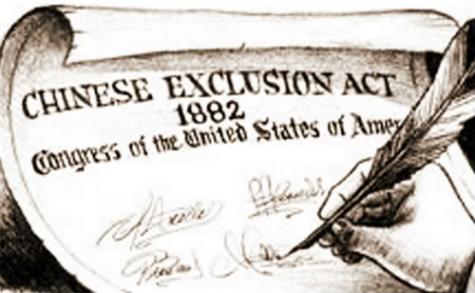 Racialized immigration has reentered the contemporary national discourse following Donald Trump’s presidential campaign and his “Muslim Ban.” Trump’s immigration policies, like “family separation” and the Muslim Ban, call for the exclusion of “undesirable” immigrant groups with appeals to order and national security; this exclusion, he argues, is a logical and impersonal precaution which serves the nation’s best interest. However, these appeals to order prove insincere when he and others effectively describe the citizens of the targeted nations as “lesser,” “untrustworthy” racial groups. Trump’s immigration policies and corresponding justifications echo the discriminatory policies of America’s past. In the late nineteenth and early twentieth centuries, the American government constructed racialized immigration in an effort to mask racist intentions with an orderly, rational, and dissociated façade.

During that time, the legislative construction of immigration policy employed abstract pragmatism to justify and downplay racial antipathy. Congress imagined both “whiteness” and the American nation with distinct, orderly borders that required protection from foreign corruption. When the American government instituted Chinese exclusion with the 1888 Scott Bill, President Cleveland framed the law as the only rational means of reestablishing order in the West; Chinese exclusion wasn’t personal, he argued, it was “self-defense” against the chaos that Chinese migration allegedly created. But Cleveland and other lawmakers minimized the incendiary racial violence that was, in fact, very personal and explicitly racial, and led to the law. The threat of rape, lynching, extralegal expulsion, and cultural persecution was the proverbial sword which imperiled Chinese-Americans between 1850 and 1890. The shroud of objectivity thus obscured the terrorism which Chinese immigrants endured, and allowed the government to write off Chinese exclusion as a rational, dispassionate solution for disturbances to the peace.

Racialized immigration later evolved to rely on coded classifications and phony, eugenic science to support the exclusion of “undesirable” migrants. Notions of racial hierarchy were disguised by the purportedly colorblind inventions of “national origin” and “ineligibility to citizenship.” In the early twentieth century, the new classifications afforded lawmakers the opportunity to racialize immigration without explicitly implicating race. European national origin meant that someone was a member of the “consanguine white race,” and, furthermore, they contained the capacity for Americanization, whereas immigrants originating outside Europe were immutably “foreign and unassimilable to the nation.” Meanwhile, “ineligibility to citizenship” was applied wholesale to the undesirable “colored races” of Africa, Asia, and Latin America—disqualifying even those who were already American citizens by native birth. The invention of these categories presented a superficially objective way to categorize immigrants while still maintaining a space for racial discrimination. Together, “national origin” and “ineligibility to citizenship” weaponized categorization, in order to suppress inclusion. These classifications, when combined with eugenic “science,” justified the racialized Immigration Act of 1924 as a rational and objective exercise of sovereignty.

Racially-skewed pseudoscience dehumanized migrants in order to redefine racial discrimination as a scholarly and impersonal calculation made in the national interest. Structured in terms of supposedly rational “science,” the quota system created by the Immigration Act of 1924 allowed the government to distance itself from the racist exclusion inherent in the law. The 1924 law masked the formalization of racial hierarchy with the “seeming objectivity of numbers” which relied on a 1909 census. The census data analyzed the surnames of the heads of household to assume national origin, and published this data as fact in A Century Population Growth. The study failed to contend with multinational surnames which predated the modern nation state, and it overemphasized the presence of white English-Americans. The inaccurate nature of surname analysis is further complicated when one considers how often surnames were altered and Anglicized upon entry to the United States at stations like Ellis Island. The quota system privileged the whites further by upholding the pseudoscience of unmixed racial fractions in its data. The 1924 Immigration Act thus conceived of racial inheritance in “discrete, unalloyed” Mendelian fractions which prevented intermarriage from sullying the “purity and virility of the white race.” Manipulating early genetic science, the legislature justified a racialized immigration regime that catered to whites with the dissociation of data – once again affording racial hierarchy the “prestige of law.” The legislative branch of American government consistently masked racist intentions with the pretense of scholarly detachment, but it was not the only branch to do so.

The judiciary maintained the same façade as Congress. Judges approached immigration as if they were an objective third party, obligated to respect the dictates of their political counterparts and the rationality of science. This jurisprudence created a space in which both eugenic science and allegedly colorblind immigration policy could be enforced unevenly, and moreover could be racialized without the court betraying the pretense of objectivity and rationality. The Supreme Court constructed loopholes for racialized immigration with the plenary power doctrine in 1889, and the finality clause in 1891. These precepts functioned to limit judicial review, effectively divesting “aliens” of their “inalienable” rights before the court and dissociating the judiciary from racial policy. The plenary power doctrine, established in Chan Ping v. United States, held that the racialized exclusion of foreigners was incident to the absolute power over national borders and national security which the political branches possessed. By exempting immigration issues from judicial review, the Court implicitly affirmed racist policy without having to sacrifice its objective veneer. This masquerade was compounded by the finality clause. The courts maintained that state “inspection officers’ decisions regarding admission ‘shall be final,’” once again emphasizing the distance between the judiciary and the immigration policies of the federal government. The finality clause and the plenary power doctrine shrouded the courts’ racially motivated rulings with an impersonal delegation of regulation. With the American democratic system at stake, the Supreme Court rationalized a jurisprudence which was superficially colorblind, and declined to detach itself from racialized immigration.

Just as non-jurisdiction was employed by the judiciary to propagate racist policy, the objectivity of “science” likewise provided a front for racialized jurisprudence. This is particularly evident in the differences between George Najour and Bhagat Thind’s appeals to the court in the early twentieth century. In 1909, George Najour successfully petitioned the court for citizenship on the basis of his Syrian national identity. This ruling promulgated a rational judiciary, as Syrian inclusion in the white race was consistent with the divisions proposed by eugenicist Augustus Keane in his 1908 book, The World’s People. While re Najour engaged racial division, it claimed to do so only on the basis of abstract “science,” and didn’t explicitly incorporate the racial hierarchy which division implied. However, adherence to eugenic science was uneven. Its logic became invalid when its system of classification threatened to sully white citizenship. Syrians could feasibly be enfolded because their numbers were small and their physical complexion relatively light. But because Indians did not share this characterization, this same “science” was rejected as a justification for their eligibility. Thus, in United States v. Bhagat Singh Thind (1923), Thind’s rational appeal for citizenship was denied in spite of sounder logic than Najour’s; Thind argued that he was racially white/Caucasian because he was an Aryan from the Caucus Mountains. Being “pure Aryan” through inter-caste marriage, however, qualified Thind for neither whiteness nor citizenship because, in this case, the technicalities of racial classification did not serve the “preservation of white racial purity.” The court only upheld the pretense of a rational, impartial jurisprudence when it served its racist inclinations.

Whether through legislation or jurisprudence, the U.S. government framed racist immigration policy as the mere performance of orderly, rational, and dissociated government.  With the uneven application of logic, science and classification, the government codified racial hierarchy and underhanded racial manipulation. The legacy of this early form of racialized immigration reverberates throughout history, and racialized immigration policy remains both relevant and superficially objective today. At the border in the 21st century, the separation of undocumented families exemplifies the dehumanization of the racially undesirable for “practical” purposes. Tracing parallels between racialized immigration policy enacted a century apart, it seems that America has yet to contend with its colorblind façade or its racist tendencies.