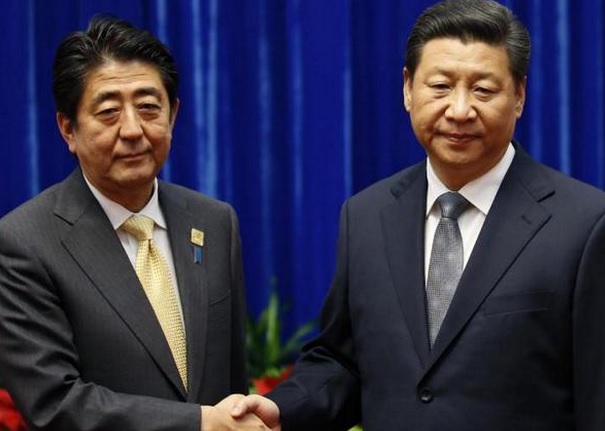 China’s decision to send fighter jets to the East China Sea last November exacerbated an already tense standoff with its neighbor Japan. The Chinese government dispatched these jets to a disputed group of islands, the ownership of which is one among a litany of issues causing animosity between the two Asian giants today. China and Japan have been at odds over who controls these islands—which China calls Diaoyou and Japan calls Senkaku—for the past forty years on-and-off, but tensions flared up again in mid-2012. Although somewhat tempered now, tensions continue in 2014, serving to underscore the contentious nature of the Sino-Japanese relationship. Grievances between China and Japan, the world’s second and third largest economies respectively, are not merely territorial, and include economic, military and geopolitical disputes as well. While not necessarily one of enemies, the relationship is certainly one of hostility and has its roots in the history between the two nations.

While at relative peace now, military conflict between China and Japan has been recurrent since as early as the first millennium. Modernly speaking, it is the 1930s and 1940s, comprising the second Sino-Japanese War and World War II, which represent the most significant instance of combat between the two nations. This historical period carries far-reaching implications for the current Sino-Japanese relationship. China still harbors bitterness towards Japan for its actions during this period, which include the latter’s 1931 incursion into the former’s Manchuria province, its brutal rape of Nanking and subsequent full-scale invasion in 1937, followed by continued conflict between the two during the Second World War. As Foreign Affairs relates:

“Although World War II is more than half a century in the past and Japanese expansionism in Asia dates back another half century still, this history continues to haunt relations between Japan and China. The War of Resistance Against Japan, as the Chinese call their version of World War II, lasted more than twice as long as Japan’s conflict with the United States; it had already been raging for more than four years when Japan attacked Pearl Harbor. By the time the war ended, it had caused far more casualties and atrocities than had the bitter struggle between Japan and the United States.”

Much of the current animosity that China harbors towards Japan is firmly planted in this past-history paradigm.

The same Foreign Affairs piece makes note of how past military history between China and Japan, particularly that of the World War II period, frames relations between the two countries today. One hot button issue that figures prominently in current Sino-Japanese enmity is the Yasukuni Shrine. Former Japanese Prime Minister Junichiro Koizumi repeatedly ignited controversy during his five year term (2001-2006) for his multiple visits to this war memorial, “where the names of the fallen of Japan’s wars are enshrined—including 14 convicted Class A war criminals from World War II.” Considering China’s memories of past suffering at the hands of Japan, it comes as no surprise that “Beijing has criticized [the visits] sharply,” underscoring the fact that “Yasukuni is a flashpoint for widespread, if often ill-informed, international misgivings about Japan’s foreign policies, misgivings that erode the regional and global effectiveness of Japanese diplomacy.”

Political controversy surrounding the Yasukuni War Shrine has continued into the current government of Prime Minister Shinzo Abe, a Japanese nationalist who made a trip of his own to Yasukuni last December, drawing a similar level of Chinese protest as seen during Koizumi’s visits. In response to Mr. Abe’s visit, China’s foreign ministry rebuked the Japanese leadership, asserting that Beijing “expresses strongest indignation for this act, which heavily offends the Chinese people and people of other Asian countries that were victims of WWII…Honoring the shrine is, in its essence, embellishing and falsely beautifying Japan’s military invasion and colonization.” Ministry spokesman Qin Gang castigated Mr. Abe’s visit as an attempt to “gloss over Japan’s militaristic past,” and remarked that “not only does the Japanese leader not show restraint, but instead makes things worse by manufacturing another incident over history.”

Shinzo Abe has been called a Japanese nationalist, a label related to his professed intent to re-interpret Japan’s pacifist Constitution, molded by U.S. General Douglas MacArthur in the wake of Japan’s surrender to the allied powers at the end of World War II. The constitutional section in question is Article 9, which reads:

“Aspiring sincerely to an international peace based on justice and order, the Japanese people forever renounce war as a sovereign right of the nation and the threat or use of force as means of settling international disputes. In order to accomplish the aim of the preceding paragraph, land, sea, and air forces, as well as other war potential, will never be maintained. The right of belligerency of the state will not be recognized.”

The Abe government’s announcement this Summer that it would re-interpret Article 9 to allow for increased military operations in conjunction with allies has led many to believe that a significant Japanese military build-up is imminent, a prospect of manifold concerns for China, East Asia and the global community as a whole.

The prospect of a Japanese military build-up would have significant repercussions for the region. Viewing the geopolitics of the situation in realist terms raises the specter of a security dilemma. Such a phenomenon is a fallback for states that engage in realist behavior in the international arena. For realists, the world is anarchic, and thus a premium is placed on state power as the ultimate arbiter as to which states will have the upper hand in the global order. Obviously, military might is a significant aspect of state power, a course that Japan appears to be pursuing in light of its re-interpretation of Article 9.

In response to increased Japanese security capabilities, China may react by bolstering its own military in turn. Making this worrisome is the fact that China has already been well engaged in a campaign of increasing its own military power—in March, months before Japan’s decision to re-interpret its constitution, China announced a $132 billion increase in its 2014 military budget, which followed a steady Chinese military build-up in the preceding years. A security dilemma appears to be developing, whereby increased military augmentation by either Japan or China will spur the other to increase its own security capabilities in turn, throwing the regional security of East Asia into question and elevating the prospect for conflict. Respective brinksmanship between China and Japan over the Senkaku Islands has not served to alleviate fears about a broader military clash. Interestingly enough, the Obama Administration appears to support a more hawkish Japan. As a strong ally in the region, more military flexibility for Japan could help the United States keep in check an increasingly ambitious and territorially assertive China. Regardless, the potential repercussions of enhanced war-making capabilities in the region cannot be ignored.

“[in 1960], China’s relationship with its Soviet advisors deteriorated dramatically, leading to the Sino-Soviet split. With the cessation of Soviet aid, China desperately needed to import complete industrial plants, as well as machinery, steel and chemical fertilizers…[leading to] the concept of ‘friendship trade,’ a system by which Sino-Japanese trade relations would be limited to particular Japanese companies that the Chinese designated as ‘friendly.’ The number of ‘friendly companies’ grew quickly from a mere eleven in 1960 to 190 by 1962.”

Bilateral trade between the two would become increasingly entrenched in the following years, “reaching a total of $621 million in 1965.”

Economic relations between the two countries would continue to develop throughout the later twentieth century. In 1975, Japan became China’s number one trading partner, with Japan exporting steel, chemicals and machinery to China, which in turn exported minerals, foodstuffs and crude oil to Japan. Such an increase in trade would continue into the new millennium. Rather extraordinarily, Burns notes that “China-Japan bilateral trade grew more than tenfold between 1979 and 1999.” According to the Japan External Trade Organization (JETRO), an independent Japanese agency which monitors trade statistics, Japan’s total level of trade with China in 2013 was around $312 billion. While slightly down from years past, JETRO’s findings reveal a substantial economic relationship between China and Japan despite their political tensions. Economic ties, however, have not been able to escape headwinds emanating from other disputes between the two countries.

Undermining the liberal internationalist’s confidence in free trade is the current political animosity between China and Japan. This antipathy in turn has led to a drop-off in trade between the two. As stated, JETRO’s findings indicated that, although sizable, trade between China and Japan had been slightly down in 2013. Gordon G. Chang, an expert on Asia writing in Forbes, notes that “In 2013, trade volume between China and Japan dropped 5.1% from the year before. That followed a 3.9% fall in 2012.” Furthermore, “Japanese direct investment in China dropped 4.3% last year.” In providing an explanation for the drop-off, Chang relates a number of comments from Chinese and Japanese figures indicating that this decreased level of economic integration is related to aforementioned political tensions. Quoting a report in the Japan Times, “the lingering effects of the Senkaku Islands territorial row” are one culprit for this diminished level of trade. And according to Yao Haitian, an expert with the Chinese Academy of Social Sciences, “Political tension was the major reason for the slide in Japan’s investment in China last year.”

Increased economic cooperation between China and Japan in the second half of the twentieth-century up through today has undeniably provided a litany of benefits to both countries. Current political tensions, however, are poised to undo much of this progress, underscoring the complexity of the Sino-Japanese relationship. Past military history has fostered a relationship based on suspicion and animosity between the two countries. China, which vividly remembers the gross injustices of the Japanese Empire during the 1930s and 1940s, understandably reacts with outrage when Japan seemingly glorifies its past military actions with official visits to the Yasukuni Shrine. The prospect of a Japanese military build-up also rekindles past memories of a militaristic Japan. On the other hand, China has conducted itself in a way that would merit a more hawkish stance from Japan, with the former’s recent assertiveness over the Senkaku Island and forceful claims over East Asian sea lanes. As a regional ally, the United States adds another layer of pressure on Japan to enhance its military capabilities, in its attempt to hold a rising China in check. A number of factors are at play that manifest in a truly complex Sino-Japanese relationship, one that is adversarial in some manners and cooperative in others.

In order to salvage the respective benefits that substantial trade between China and Japan has fostered, the prime reason the two countries have any relationship at all today, both nations must engage in a dialogue committed to increased economic cooperation, acknowledgement of past injustices and respect for territorial sovereignty in the region.