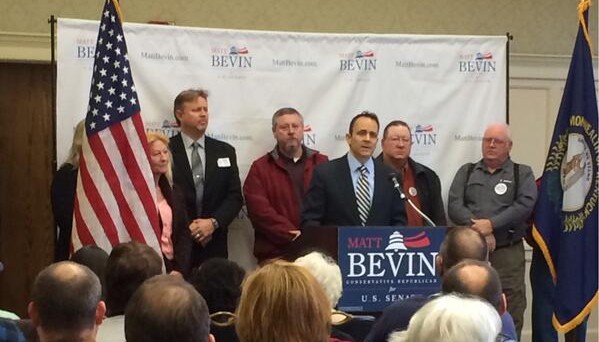 It takes places in a grassy field. Sitting in the back of a white pick-up truck is Dwayne Stovall, a businessman clad in denim from head to toe with a rifle leaning against his side. Resting comfortably next to him is his dog, panting as his owner rips into Texas Republican Senator John Cornyn. Mr. Stovall, who recently challenged Cornyn in Texas’s Republican primary, rips into the senator’s alliance with Senate minority leader Mitch McConnell, who Stovall pans for looking and fighting like a turtle. After repeating this absurd motif in labeling McConnell a “beltway turtle”, and swiping at Cornyn for his support of him, the inexplicable takes place—the dog talks, claiming its preference for turtle soup. Stovall smirks at his dog’s remark, the words, “Dwayne Stovall for U.S Senate” appear on the screen and the ad ends.

This is the kind of rhetoric that right-wing fringe groups have adopted in seeking to oust establishment-backed Republicans in this November’s mid-term elections. GOP incumbents like Cornyn and McConnell (who is facing his own primary challenge from the Tea Party-backed Matt Bevin) are being hammered from the right for selling out conservative values. Rather perplexing, since Cornyn is one of the most conservative members of the Senate, holding a 93% rating from the American Conservative Union, while McConnell has made opposition to President Obama’s agenda his leadership role’s calling card, claiming in 2010 that making Obama a one-term president is “the single most important thing” Republicans had to achieve. In spite of this, the hashtag #liberalcornyn had been trending on Twitter prior to the recent Texas primary, while outside conservative groups relentlessly fund attack ads on the “beltway turtle” McConnell.

The two top-ranking Republicans in the United States Senate are appropriate figures of the Establishment vs. Tea Party civil war taking place within the Republican Party, with the 2014 midterms serving as a flash point of the struggle. Cornyn just defeated his primary challengers handedly, carrying 61% of the vote over Tea Party-aligned candidates Steve Stockman and the aforementioned Mr. Stovall.  McConnell, who recently made clear that establishment-backed candidates like himself intended to “crush” all Tea Party candidates challenging GOP incumbents, looks poised to do just as much to Mr. Bevin. Not so sure are the Kentucky Senator’s prospects against his Democratic challenger, state Secretary of State Alison Lundergan Grimes, who is widely expected to offer a difficult re-election contest for McConnell.

While Democratic vulnerability in the Senate has become the central theme of the 2014 midterms, several Republican candidates face contentious re-election battles themselves. In spite of this, outside conservative groups are more than content to hammer at these establishment-backed incumbents and continue funneling money into far-right candidates—candidates who are un-electable in their own right, and only further diminish conservative support for incumbents who have proven to be plenty conservative. Just as much appears to playing out in Kentucky’s U.S. Senate election between McConnell and Grimes, echoing a new development where outside conservative groups are more concerned with ousting current Republican Senators than they are with creating a majority in the Senate. Instead of striving for this Senate majority, which would serve to even further hamper the President’s agenda in his last two years of office, Tea Party groups entrench themselves in propping up unpalatable candidates— the GOP establishment’s worst nightmare and an early Christmas present for the liberal Democrats these groups purport to oppose. The uncompromising conservatism of these groups, in their bitter opposition of the GOP establishment, has ironically become the number one roadblock to enacting conservative policies. They, in effect, become enemies of conservatism.

Although the Democratic Party has singled out the Koch Brothers in recent weeks for their outside financial support of conservative candidates this November, Charles and David Koch are not spearheading the primary onslaught against the GOP, and their attack ads have mostly been geared towards Democrats. The true culprits are groups such as ForAmerica, FreedomWorks, Club for Growth, the Senate Conservatives Fund, and Heritage Action, the lobbying arm of the influential Heritage Foundation think tank. Such groups have become absolute poison for Republican electoral success since they have decided that their number one priority is defeating the GOP rather than Democrats. They’ve become ingrained in a political schematic by which their success is inversely proportional to that of the Republican Party’s, diminishing the number of Republicans in the Congress and in turn preventing the legislature from  enacting conservative policies.

Let us first consider the issue of primarying. Seven Republicans are facing Tea Party challengers from the right. We saw Cornyn get the best of his challengers, while McConnell appears ready to triumph over Matt Bevin in Kentucky. In fact, it looks as though every Republican incumbent in the Senate should prevail over their primary challengers. But the existence of these far-right candidates bodes ill for the GOP in the general election. For one, it allows Democratic challengers to paint Republicans as conservative extremists and puppets of the Tea Party, a political strategy that has become more and more accepted, useful (and in some cases, accurate) in Democratic circles. Furthermore, it drives support away from establishment candidates, which keeps more conservative voters home on Election Day and makes it even more likely that Democrats will triumph over their GOP challengers. The more that conservative groups obsess themselves with replacing Mitch McConnell, Lindsey Graham (South Carolina) and Thad Cochran (Mississippi) as their party’s respective Republican Senate Candidate going into November, the further the wedge between the GOP is driven, paving the way for Democratic (and liberal) success, making it clear just how antithetical outside conservative groups are to the conservative movement.

Sometimes, these groups are successful in ousting established incumbents in favor of Tea Party candidates. This took place in Indiana in 2012, where State Treasurer Richard Mourdock won the Republican nomination over Dick Lugar, who had been in office since 1977—Indiana’s longest-serving senator, a well-respected statesman and a good conservative. How could a right-wing fringe candidate like Mourdock oust such an individual? Outside conservative groups. In their efforts to defeat Lugar, they spent over $2.8 million in support of Mourdock in 2012, according to the Federal Election Commission, with Club for Growth Action spending over $1,458,000 and FreedomWorks spending north of $437,000.  Such a spending onslaught won Mourdock the Republican nomination over Lugar, which gave him the opportunity in October of that year to call pregnancies resulting from rape “a gift from God” in a debate with his Democratic challenger Joe Donnelly (who was pro-life himself). Mourdock’s staunchly conservative and insensitive rhetoric on abortion led many would-be voters to abandon him, allowing Donnelly to defeat him that November. In challenging Dick Lugar so viciously during primary season, Tea Party groups demonstrated the aforementioned anti-conservative schematic–by turning their resources towards the establishment during primary season, they paved the way for a Democratic candidate to become elected and diminished the potential for conservative policy as championed by a conservative (yet reasonable) politician in Dick Lugar. The  alliance between the Tea Party and outside conservative groups was successful in defeating the GOP in this instance, an electoral goal that is in effect looking more and more like liberal activism.

House Speaker John Boehner, who is no stranger to temper tantrums from the Tea Party-wing of his own Republican Party, summed up the groups who support them rather succinctly this past December, saying that they have “lost all credibility.” Boehner was referring specifically to the government shutdown effort over funding the Affordable Care Act, a strategy championed by the Tea Party and opposed by the more politically intelligent members of the GOP like Boehner. “[These groups] pushed us into this fight to defund Obamacare and shut down the government. Most of my members know that wasn’t exactly the strategy I had in mind. But if you recall the day the government reopened, one of these groups stood up and said ‘Well, we never thought it would work.’ Are you kidding me?” This is the kind of politicking to which fringe conservative activists have succumbed. They throw their support behind political suicide in the name of “principles”, in turn making those principles harder to enact.

Texas Senator Ted Cruz, a Tea Party darling whose top donors include the Club for Growth and the Senate Conservatives Fund, spearheaded the government shutdown effort over Obamacare, which led to a major drop in support for the GOP and distracted from the disastrous rollout of the Affordable Care Act, which would have otherwise been political gold for the Republican Party. Of course, the GOP couldn’t reap the full advantages of the botched launch of a law that they so vehemently oppose because they were too busy appealing to Tea Party extremists and the groups that prop them up. The Affordable Care Act has become the number one source of anxiety for Democrats up for re-election in the Senate this November—can you imagine the level of anxiety they would feel if there was never a shutdown to distract from the law’s rollout from the onset? In a way, the Tea Party’s shutdown effort was almost a relief for Democrats, as it diverted attention away from a law that looks more and more flawed by the day. If the Republican Party continues to heed the call of Tea Party groups, the less likely they’ll be able to elect reasonable conservatives who actually have the political intelligence to enact conservative policies.

Speaker Boehner’s quip that Tea Party groups have lost all credibility rings true. Whether they’re calling Mitch McConnell a “beltway turtle”, spending millions of dollars on un-electable primary challengers from the right or leading efforts to shut down the government, they continue to show that their interest is not in governing, but in appeasing an uncompromising right-wing constituency. They divert their resources to attacking GOP incumbents, giving Democrats the ability to remain in power, where they can push for the liberal policies that conservative groups claim to oppose. This has the potential to happen in 2014 if Republicans are not able to quell the fringe of their party. Given the political fallout from Obamacare, the GOP has the opportunity to make big inroads in gaining a senate majority in this year’s midterm elections. In order to do this, they need to win the messaging battle over the Tea Party and the outside groups that spend heavily on them. If the “beltway turtle” Mitch McConnell intends on being Senate Majority Leader come January of 2015, his prediction that the GOP will “crush” the Tea Party must come true. May the establishment reign supreme this November.