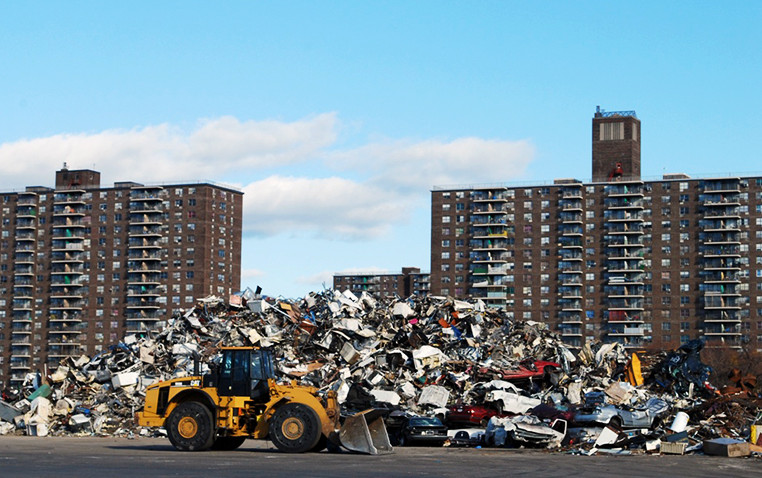 Imagine being unable to walk your local streets without feeling a tightness building up in your chest. Imagine looking outside your window and seeing mountains of waste seemingly extending up to the clouds. And, finally, imagine being unable to escape the constant noise and exhaust of diesel trucks passing through your community to feed those ominous trash mountains.

These scenarios are just the tip of the iceberg for people living in countless minority communities across the United States, where waste processing facilities are disproportionately situated. Unbeknownst to many, this injustice must be addressed because it unduly diminishes the well being of citizens living in communities of color.

This massive injustice is taking place on a rather large scale in America’s most densely populated city, New York City. Alarmingly, 80 percent of New York City’s waste handling capacity is located within three of its poorest neighborhoods– the South Bronx, North Brooklyn, and Southeast Queens. While this injustice harms all three of these impoverished, predominately minority communities, the effect is most pronounced in the South Bronx. A home to many persons of color, the South Bronx has essentially become a dumping ground for New York City waste. It is estimated that nearly one-third of the city’s trash is processed at waste facilities in the South Bronx and that nearly 1,400 diesel truck trips are required to transport the 6,000 tons of waste that pass through the South Bronx each day.

As a result of this unjust disparity, the wellbeing of citizens living in communities of color is being greatly diminished. No matter the area, harmful waste processing techniques diminish food quality, air quality, and water quality. For instance, residents of the South Bronx struggle with high levels of air pollution and diminished living conditions because of their proximity to waste processing sites. This struggle is manifested in the fact that the South Bronx holds the highest age-adjusted asthma induced death rate among all counties in New York State and one of the highest in the country. The citizens of the South Bronx likely experience such high levels of asthma-induced deaths because they are constantly subjected to air pollution from diesel waste trucks and waste burning facilities. As William Whyte, a professor at the University of Pittsburgh, explains, “Once environmental hazards are in the mediums that transmits them, the very life-sustaining functions that individuals must perform may put them at risk of exposure to life-threatening toxins.”

It is a shame that minority communities are forced to bear the brunt of waste-related issues. In a country where every citizen is entitled to life, liberty, and the pursuit of happiness, waste-processing responsibilities should be equally dispersed across all communities. The harsh reality is that they are not.

While there is no easy solution to this complicated injustice, it is imperative to raise awareness about this issue on a state and national level. One way this can be achieved is to encourage citizens in minority communities to participate in studies attempting to highlight the extent of the environmental degradation in their communities. For instance, Sustainable South Bronx has launched an initiative to gather accurate air quality data by having citizens wear portable air quality monitors.

So next time you flick a piece of trash into a garbage can, consider the high likelihood that it will end up in a predominately minority community because of the disproportionate existence of waste-processing facilities there. Then, take the pledge to combat this injustice. Indeed, the majority of society will need to do so in order to start correcting it.