Strict Standards: Declaration of Custom_Menu_Wizard_Sorter::walk() should be compatible with Walker::walk($elements, $max_depth, ...$args) in /home/s2ncq8pxua8t/public_html/wp-content/plugins/custom-menu-wizard/include/class.sorter.php on line 0
 The Virginia Governor’s Race and What it Means for the 2022 Midterm Elections – FORDHAM POLITICAL REVIEW
Skip to content
Latest News
The Right is on the Rise in the U.S. But it’s Failing Elsewhere.
Race and Wrongful Convictions
Midterm Elections to Test Trump’s Influence on Republican Party
A Story You Might Have Missed – A Climate Activist and the Supreme Court
A Step in The Right Direction: What Biden’s Reaffirmation of the Armenian Genocide Means for the Future of Human Rights 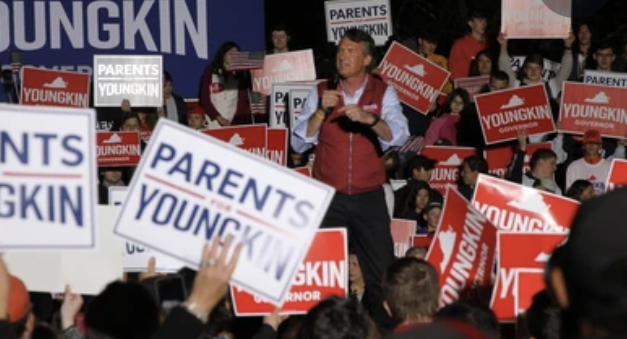 In the 2020 election, Joe Biden carried the state of Virginia and its 13 electoral votes by a 54.1-44% margin after it had been largely predicted that the state would go blue, rather than being the battleground that it was in the past three Presidential Elections. Thus, when Virginia held its statewide elections in 2021, a year after the Presidential elections, being only one of two states to do so, it received national attention. The Virginia and New Jersey state elections are generally watched closely because they provide an opportunity to see what voters are thinking about the current presidential administration. After entering the White House with a 53% approval rating, President Biden’s approval rating has fallen to 42.9%, and Virginia’s statewide elections painted an even darker picture for the Democrats. In what many news outlets called an “upset,” Republican Glen Youngkin defeated Democrat Terry McAuliffe in the gubernatorial race 50.6-48.6%, becoming the first Republican to win a statewide election in Virginia since 2009.

While what happened in Virginia is certainly concerning for Democrats, considering the margin by which they won the state, it is not out of the ordinary. According to CNN, Virginia has a history of electing Governors from the opposite party that emerged victorious in the Presidential election. The Democratic victory of Terry McAuliffe in 2013 after the re-election of Barack Obama was an outlier of election results in Virginia. However, it would be irresponsible for the Democrats to point to this trend as a reason for defeat. Younkin’s victory demonstrated what a post-Trump Republican campaign looks like, and also proved that Democrats cannot be complacent or divided in facing such a strategy, should they wish to win important elections.

In the Virginia election, Glen Youngkin had to strike the balance that many Republican candidates will have to traverse in swing states in the 2022 midterm elections: how much Trump? According to GOP strategists, Youngkin has written the new playbook on how to succeed as a Republican candidate. After earning the endorsement of President Trump by spreading false election fraud claims, Youngkin focused on education and local issues that Trump did not frequently comment on. Furthermore, state Republicans in Virginia attribute Youngkin’s victory not to any Trump involvement or support, but more to “an environment fueled by disenchantment with the Biden administration, anger that the coronavirus pandemic shows few signs of receding.” A former Chairman of the Republican Party of Virginia noted that “a lot of money and time” was spent turning out 2016 Trump voters, as well as those Republicans that had never voted for him in the past. By using Trump tactics to score points, while seeking to avoid either criticizing or standing by the former President, Youngkin took the base Republican strategy under Trump and manipulated it to befriend independent voters necessary for victory. Although this strategy may seem revolutionary in some respects after watching two Trump campaigns, much of Youngkin’s strategy involved playing into GOP obsessions with critical race theory and transgender rights, two topics often discussed by Trump, thus securing the base voters that come along with the former President. Although Mr. Trump stated that “Without MAGA, he would have lost by 15 points or more,” it is clear that the future Republican plan for contentious states will involve staying away from the former President, both physically, and in messaging.

Another issue that Democrats will be forced to address in upcoming elections is that of education in the times of COVID-19. According to the Atlantic, education was the most important issue for voters in the Virginia gubernatorial election, “edging out the economy 24 to 23.” While Democrats have historically done well in education in Virginia, Youngkin came into election day with a 9 point lead over McAuliffe among voters whose first priority was education. In prosperous counties with high-quality school districts, public school enrollment began to drop to the tune of 5%, which is unacceptable in counties with fast-growing populations and good-quality public schools. These factors have contributed to a loss of Democratic votes in suburban Virginia that were the “key” to Democratic victories in Gubernatorial, Senate, and House races. These races caused the state to lose its swing-state status in 2020 and become viewed as a blue state.

After losing the Gubernatorial election, and subsequently, the swing-state status, the future looks dark for Virginia Democrats. Zachary Carter of The Atlantic writes that following the current trend, Democrats should expect to lose 3 seats in the House of Representatives at the midterm elections, with a difficult fight ahead for one more seat. Furthermore, if troubles in other states are the same, the midterm elections could be catastrophic for the Democrats. Progressive Democrats are not content to sit by and allow this to happen, however. Frustrated after Terry McAuliffe’s loss in the Virginia election, Alexandria Ocasio-Cortez mentioned that she and the progressive caucus had been “unwelcome to pitch in” with the candidate’s campaign effort and that McAuliffe’s loss “show[ed] the limits of trying to run a fully 100 percent super moderated campaign.” Moderate Democrats, on the other hand, blamed the loss on the party leaning too heavily into progressive positions. It is indicative of a growing divide within the Democratic party and one that will be important to observe at the midterm elections.

Progressives argue that the message that has been adopted by the Democratic establishment, as Ocasio-Cortez puts it, “saying ‘we’re not Trump,’” is a “deeply demoralizing message.” Instead, progressives seek to reinvent the Democratic party message into one that inspires the party base, a base that largely did not turn out in Virginia, as well as important swing voters like suburban women. The passage of policies like “paid parental leave, prescription drug reform, and Medicare expansion” will be key to any large-scale Democratic success in the midterms, but progressive politicians believe that much of the party establishment does not agree. Leah Greenberg, director of a liberal advocacy group, stated after the McAuliffe loss that “the assumed safe candidate is not necessarily a safe candidate.” Any complacency within the Democratic party will be punished at the midterms, with the path to holding a Majority in the House of Representatives being made even more difficult due to a surge in gerrymandering in districts across the United States. As redistricting, which happens every 10 years, began to take place, states like Iowa, North Carolina, Texas, and Montana became Republican-advantaged in House seats. Republicans added “a net of 5 seats” that they can expect to hold, while Democrats lost one. This means that Republicans need to flip only 5 more seats in the House to regain a majority.

It is not unusual for the party in the White House to lose large numbers of seats at the midterms following their inauguration, as President Obama lost 63 seats in 2010, and President Trump lost 40 in 2018. Furthermore, it seems as though the Senate will be a difficult Democratic majority for Republicans to flip. However, if the Virginia gubernatorial Election has taught Democrats anything, it is that resting on the notion that a candidate will be a sure victory is dangerous. The time has come for an inspiring and cohesive Democratic agenda, as well as the swift passage of legislation to give candidates a boost in their upcoming elections.