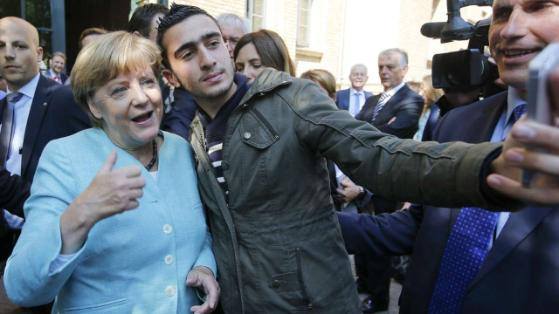 Looking back two years, one can recall the all too familiar sight of the Greek people demonstrating in the streets of Athens, holding up signs depicting Angela Merkel clad in an SS uniform and with a penciled in Hitler mustache. Not withstanding the fact that her actions in dealing with European crises, namely the Greek debt crisis, have divided Europe, some see her as the new ‘Iron Lady’ of the European Union. For the past ten years, she has governed Germany rationally, thoughtfully, and pragmatically. Some have criticized Merkel for being too reactionary and simply molding her actions in accordance with public opinion; to others, she is seen as astute, being aware of the concerns of the general population.

In the past few months, another side of Angela Merkel has emerged. When millions of refugees started to flood into Europe, she stood up and led by example. Telling the Syrian population that every Syrian is welcome to seek asylum in Germany, Merkel opened up the German borders to those who waited on the periphery of Hungary. By taking this action, she again gained the support of the German population. Thousands of volunteers greeted refugees at the train stations, providing them with food and clothes and presenting gifts to traumatized children. Germany showed moral leadership, and a wave of euphoria resonated throughout the entire country. For weeks, no other topic dominated the headlines, and the political sphere in Germany was united in helping those who needed it most. Economists praised the wave of Syrian refugees, who are mostly well educated, as providing the workforce that the country so desperately needs in order to deal with its demographic problem. Helping those displaced families looked to be as much of a humanitarian act as it was economically beneficial.

However, public opinion slowly started to shift. With growing numbers of refugees arriving, many observers started to raise essential concerns. How many refugees could Germany sustain? How well could a country that still does not see itself as a country of immigrants integrate hundreds of thousands of immigrants? Within the past two months, the expected number of refugees was recalculated several times, from 800,000, to one million, and finally to 1.5 million for 2015. In fact, some experts expect up to five million refugees to arrive within the next three years.

Currently, many refugees live in makeshift tents, but as winter rapidly approaches, some cities have had to take drastic action. The city-state of Hamburg recently passed a controversial bill that allows the municipal government to nationalize unused or empty apartments. Horst Seehofer, the governor of Bavaria and leader of the Christian Social Union (CSU), Merkel´s sister party, threatened Berlin that his state would use “self defense” measures if a limit is not imposed on the number of refugees. Even Joachim Gauck, the German president and former Lutheran pastor and civil rights activist in the German Democratic Republic (DDR), stated that Germany has only limited capacities to cope with the wave of immigration.

These criticisms were indirect attacks on the politics of the German chancellor, reflecting the shift in popular consensus. For the first time, German conservatives started to attack their own party leader, thus refusing fellowship and threatening the cohesive nature of the Christian Democratic Union (CDU). But in the midst of all the criticism, Merkel stated that she would not back down, repeating over and over the phrase “Wir schaffen das” (We can do it). Just recently, she created a new task force to address the issue, transferring political power from the Federal Minister of the Interior to herself and her personal minister. This weekend, the grand coalition between the CDU, CSU and the Social Democratic Party (SPD) passed legislation to strengthen integration and enable German communities to provide adequate housing for refugees during the winter. In addition, it opens up the labor market for refugees from the Balkan states, while simultaneously shifting its focus to Syrian refugees by declaring Kosovo, Albania and Montenegro as safe countries of origin.

These days, Germans see a different Angela Merkel, a chancellor who speaks from her heart. When someone asked whether her decision to open the border for the stranded refugees in Hungary was a mistake, she responded, “If we now even have to apologize if we help people in need, then this is not any longer my country.”

For the past ten years, Angela Merkel has effectively governed Germany and led it through several severe crises. At the helm of Europe’s largest economy, she navigated Germany through the worldwide financial crisis while concurrently preventing a recession. She stabilized the European Union in crucial moments, serving as the main mediator between Vladimir Putin and the West—first in the Ukraine crisis and now in nearly every international conflict. Angela Merkel is normally not a woman of great pathos. She refuses to make definite statements, knowing that the political reality can change instantly. That is why her comments on the refugee crisis and the necessity of helping those in need are so remarkable. They display a shift from her usual demeanor. For the first time, she is entering a political situation that she cannot predict.

Gerhard Schroeder, Merkel’s predecessor, was the initiator of Agenda 2010, a reform of the German economy that has been the catalyst for economic prosperity in recent years. He saw the necessity of the agenda despite the fact that his Social Democratic Party was against it, ultimately costing him the chancellorship. Angela Merkel has never been one to speak in absolutist terms. Now, she cannot change her stances any longer. Essentially, this will prevent her from shifting with public opinion, should she want to. Her political destiny is now tied to her “Wir schaffen das” phrase. Germany, with Merkel at the helm, will either navigate through this crisis or see the end of Angela Merkel’s chancellorship.