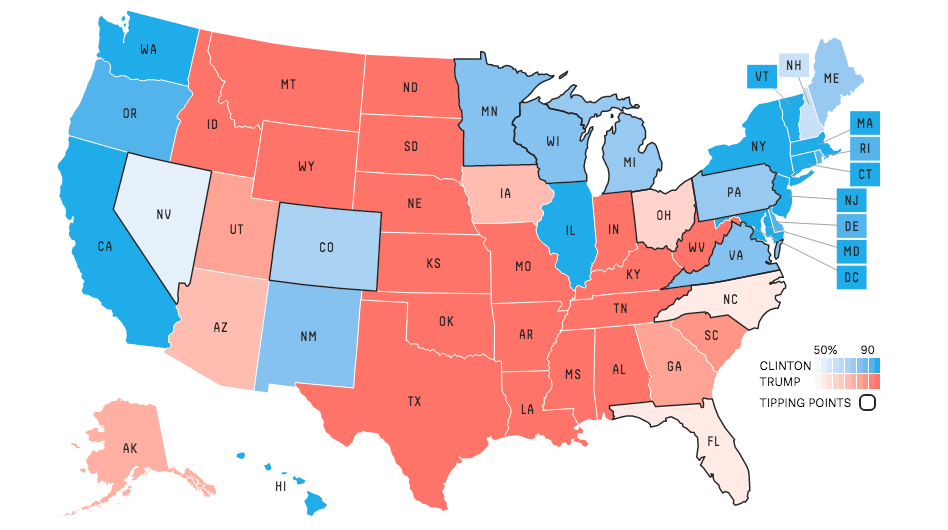 Over the past week, the presidential race has tightened prodigiously between Hillary Clinton and Donald Trump to a virtual standstill. Particularly newsworthy events over the last seven days that have contributed to the narrowing of the polls include a favorable jobs report, news about an expected hike in Obamacare premiums for the upcoming year, and perhaps most impactful, the FBI’s announcement to reopen the Clinton email investigation after finding new evidence in an unrelated probe on Anthony Weiner (on Sunday, the FBI disclosed that it would ultimately not bring charges against Clinton). Supplement all this with the general convergence that is to be expected for any election when candidates shore up support among their party bases, and you begin to ascertain how a projected Clinton landslide just a few weeks ago all but dwindled to a virtual electoral tossup.

Though it is indeed true that Clinton will always have an edge because of changing demographics that favors the Democratic candidate, Trump has the momentum this time around as indicated by polls showing an upward trend for his campaign in the final days of the election. As a result of this momentum, Trump has solidified his position in states that have been traditional Republican strongholds in years past, but were considered to be on-the-fence due to Trump’s unorthodox style and changing demographics. Texas and Arizona fall into this category due to their vast Hispanic populations that typically vote for the Democratic Party in droves. Georgia was also considered “in-play” as a result of its sizable African American community. Nevertheless, Donald Trump should feel confident he is going to win over these states despite previous indications to the contrary. The most recent polling data from these states have put Trump in a commanding lead over his opponent, rendering the chances of a Clinton breakthrough in any one of them almost nill.

There was also some question about how well third-party candidate Evan McMullin would perform in Utah, and whether he was capable of either pulling off an upset or taking away enough Trump votes to hand the state to Clinton. Both these scenarios seem highly unlikely according to recent polls, which give Trump anywhere between a nine and 20 point lead in the Beehive State.

With this all said, Trump would still need 55 electoral votes to crack the pivotal 270 threshold needed to win the presidency (check out this map to see what I’m talking about). He can prevent a Clinton victory by winning the four most decisive states of the 2016 election: New Hampshire, Nevada, North Carolina, and Florida. It is essential that Trump win at least three – and more likely four – of these states to secure enough votes in the Electoral College. Their combined output of 54 total electoral votes will put Trump just one shy of the 270 majority needed to win the presidency.

While this isn’t a desirable outcome for either candidate, it favors Trump because then the GOP-controlled House of Representatives would decide among the three top vote-getters in the Electoral College who becomes president. Assuming that Evan McMullin doesn’t pull off an upset in Utah, or some other third party candidate steals an electoral vote elsewhere, the House would have only Trump or Clinton from which to decide, odds that clearly work to Trump’s advantage.

Trump can avoid the above scenario altogether if he maintains his marginal lead in Maine’s second congressional district, which would allot him the one electoral vote needed to crack the 270 benchmark if all else holds. Maine and Nebraska both allocate their electoral votes by congressional district, which offers Trump a legitimate opportunity to steal a vote in a traditionally deep blue state, a reversal of what Obama did in Nebraska in 2008. It should also be noted that Trump could find a route to victory through a combination of the following states: Pennsylvania, Michigan, Wisconsin, Minnesota, Colorado, and/or Virginia. Anyone of these – particularly Pennsylvania – would almost surely tip the scales in Trump’s favor, since they would provide enormous insurance to his general strategy by considerably reducing his stakes in must-win swing states like New Hampshire. Put differently, Michigan, Pennsylvania – even Colorado – would add a bulk of leverage to his overall prospects by allowing him to forgo crucial states that are basically in a dead heat at this point.

If Trump cannot accomplish this, it will only aggrandize the stakes in Nevada, New Hampshire, and even Maine’s truculent second congressional district. These are all places that seem to blow with the wind, and thus should be expected to very much model the state of the country at large come Tuesday.

The momentum, the polling, the early voter turnout all seem to insinuate the American people are vying for a change in pace. It just remains to be seen whether voters will take those same proclivities with them when they cast their ballots for the next president of the United States.

For your own pleasure, here are my five most plausible electoral maps for a Trump victory ordered in likelihood of occurrence. Map 1, Map 2, Map 3, Map 4, Map 5. (Note these predictions were made from a variety of polling websites, including NY Times Upshot, FiveThirtyEight, and Real Clear Politics, among others. Design your own electoral map here.)