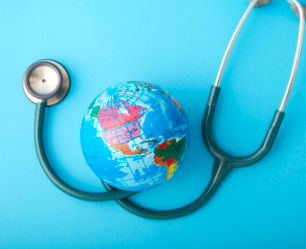 Italy, Spain, New Rochelle, Seattle: all under quarantine.  Graduations are cancelled, people are being fired, and above all, people are dying.  Lives are being flipped upside down, and the biggest question on everyone’s mind is, “How can we stop this?”  The president says that people need to “listen to their doctors,” but around a quarter of all American adults don’t have a primary care physician.  And in the midst of all this,  on March 15th, we saw a debate on the national stage, all social distancing recommendations followed, where the democratic two candidates debated whether or not we actually need universal healthcare.

People often confuse single-payer and universal healthcare, or consider them a package deal.  Single-payer healthcare is when a single entity, usually the government, is in charge of financing and operating the healthcare system.  Universal healthcare, on the other hand, is simply a system where healthcare is guaranteed to all citizens regardless of financial status.  In Italy, one of the countries hit hardest by COVID-19, the Servizio Sanitario Nazionale, or National Health Service, has been working overtime in order to provide “vital defense against mass infection” throughout the country.  The SSN has been the primary source of information and healthcare for the people currently quarantined in Italy.  Of course, their system is not nearly perfect, and, unfortunately, many people have died in Italy; at the same time, without the SSN, the death rates would have been much higher than they already are.

Conversely, South Korea, which also has a nearly-universal system that covers 97% of all citizens, has been one of the biggest success stories when it comes to treating COVID-19.  South Korea’s healthcare is actually both publicly and privately funded, which makes it universal but not single-payer.  The country saw its first case in late January, and immediately after, the national government made it a priority to immediately find ways to slow the spread of the virus in South Korea.  Their approach was markedly different from the United States’: it was quick and immediate, involved both public and private companies in order to distribute resources, and most importantly, it was a national effort.  The basis of having a universal healthcare system was vital in South Korea’s response to the virus, because it set a foundation for an immediate national response.

The first step to making sure that every person has access to care when they need it is to implement  a universal system. Other than panic-buying, telecommunication issues, and the lack of paid sick leave (that liberals have been pointing out as a potential health risk for years now), many of the issues we are facing come from the healthcare industry itself.  The Harvard Business Review says that there are many contributing factors to the healthcare crisis being exposed by the pandemic right now, including an uneven distribution of physicians in certain areas, inflexible models of primary care and incomplete coverage– “A significant number of people simply can’t afford to access primary care.”

So before we even think about single-payer healthcare, we must realize that universal healthcare is the first step to keeping America safe.  But what we do not need is for-profit healthcare, which is essentially what we have right now.  Because, even if healthcare is universal, the government is not going to offer the best healthcare options to the general public if there’s a way to make money off of it.  And, with for-profit healthcare, there certainly will be. Private health insurance companies won’t let the government offer anything remotely close to the best coverage because they still want to make money.  And they will be making that money if people think it’s necessary to pay to get out of the government’s low-grade insurance and into a better plan. It will remain a wealth test — people who can afford to have better healthcare will; people who cannot will not have access to what they need.  And people will still die.

“Today more than ever, something that Italians take for a fundamental individual right — a freedom from want, worth far more than many formal liberties that only the richest can truly enjoy — appears for what it really is, i.e., a public good,” writes Giocomo Gabbuti, an Italian doctoral student at Oxford. Gabbuti is living in Italy right now, in quarantine, and is acutely aware that because of our inefficient response to the virus, America is not living up to its promises of life, liberty, and the pursuit of happiness.  Sure, the government is waiving copays for COVID-19 testing (not actual treatment, though –“Heaven forbid they miss a chance to bankrupt sick people”), but it will not be enough.  People are not listening to the government’s recommendations for social distancing and isolation.  People who are unable to afford treatment will get sick.  People will continue to die, and not having access to life-saving health care is a violation of your right to life.  Not being able to live freely for fear of being bankrupted by your insurance company (at any time, not just during a pandemic) is a violation of your right to liberty.  Not being able to help your sick loved ones or to do the things that you love because you cannot afford treatment is a violation of your right to happiness. “We pay so much for you guys to have good insurance,” some parents say to their children.  Good. They love and care about their children. Other families who aren’t as privileged, whose parents love and care for their kids just the same, cannot afford the same healthcare. With a universal healthcare system these people, and everyone else, would pay less for higher–quality care.  South Korea’s system took over a decade to get to where it is now, and still it is not perfect, but the country has inarguably handled this crisis better than the United States has.  Last week, we surpassed both Italy and China in COVID-19 cases, because we didn’t take the threat seriously, and we see life as expendable when it comes to saving the economy.  All of this upheaval to our daily lives, not to mention all of the deaths, could have been lessened or even avoided if only we had a competent and compassionate healthcare system.  What will it take for us to realize that we should care about other people in this country and not just ourselves?