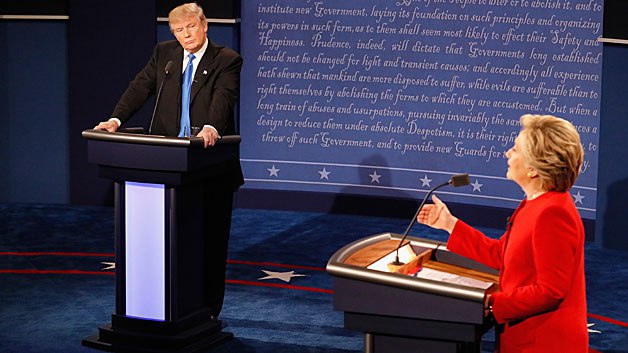 Monday’s first presidential debate, seen by close to one hundred million people, pitted Donald Trump against Hillary Clinton together for the first time. While many post-debate polls — such as this widely cited one by CNN — have crowned Clinton the winner, it by no means was a resounding victory, if one at all. Going forward, Trump can glean a lot from his performance and work to avoid the same traps that beleaguered him on Monday.

Trump’s primary fault was his inability to reframe many of the debate questions in his favor, as he was repeatedly on the defensive, “taking the bait” instead of exploiting the many things that have plagued the Clinton campaign over the past month — her health, the emails, Benghazi, or surreptitious donor activity by the Clinton Foundation.

All these topics remained largely untouched, allowing Clinton to focus more on her composure, which for the purposes of this evening, proved to her advantage as Trump gnawed away with rejoinders light on substance but heavy on noise.

Though inadequate preparation and inexperience on a stage of this magnitude likely disfavored Trump, moderator Lester Holt chose topics of discussion that clearly encumbered Trump from achieving the offensive, given that a significant amount of time was focused on things he’s said, rather than issues for which he’s advocated.

By now it should come as no surprise that modern presidential debates consider finer policy specifics as mostly tangential; especially compared to image and tone, which are paramount for success in the sound bite age. Nevertheless, it was disconcerting to see how Trump’s tax returns, the “birther” movement, and conversations about temperament played such pivotal roles in the debate, whereas equally pointed questions regarding Benghazi, the emails, and Clinton’s health were mentioned only in passing, and only as a direct rebuttal to accusations Trump made about Clinton. If not for Trump, the American people would not have heard anything about Clinton’s health or any one of the scandals that have plagued the Clintons over their political careers.

As far as the American public is concerned, these remain salient issues that demand consideration — it can be argued that Clinton’s robust appearance on stage dispelled any further conspiracy about her health. However, politics is a game of perception, not facts. Joseph P. Kennedy used to tell his boys, “It’s not what you are, but what people think you are that is important.” That’s why “Low-energy Jeb,” “Lyin’ Ted,” and “Little Marco” proved so effective for Trump during the primary debates. If Trump is to succeed in the next two debates, he’s going to have to find a way to portray Clinton as untrustworthy and iron-hearted, thereby confirming many people’s already held suspicions about her.

If he can do this, he will have success and continue to garner momentum. Whatever faux pas Trump made in the first debate, Clinton equally failed to render herself authentic and likable to the American people, which is especially critical. The American public is already reluctant to accept Clinton as its nominee, which plays considerably to Trump’s advantage. And since many are pining for an alternative, Trump must hone in on this widespread disenchantment by proving that he can fill that desired role. If he is ultimately successful, then he will have convinced enough undecided Americans that he can speak to the issues resolutely and not become overly entangled by negative coverage. All this will serve to his main goal of reworking the discussion on his strengths and her weaknesses, thereby making him the more qualified candidate for president.