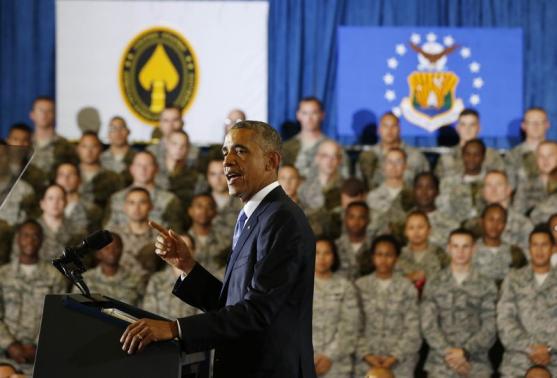 The United States returns to Iraq less than three years after pulling out the last U.S. troops in what was supposed to be the official end of the Iraq War. In October 2011, as the last of the troops were coming home, President Obama announced that the “tide of war is receding” and that United States would “partner with an Iraq that contributes to regional security and peace, just as we insist other nations respect Iraq’s sovereignty.” It is saddening that these hopes never came to fruition and that only three short years later President Obama would have to make another speech about Iraq, this time with the U.S. military moving in the opposite direction.

The mood was appropriately somber as President Obama addressed the nation on September 10th, announcing his decision to increase the United States’ role as a combatant against the terrorist organization ISIS. At the moment, the President has no plans to send ground troops; airstrikes—in an expanded campaign as of September 10th—will remain the only means of intervention.

How did we get back to this place? How is it that the United States once again finds itself engaging with militants within the borders of Iraq? And how did it happen so soon after we called it quits? It is easy to disregard the question of how we got here in favor of where we are going, but history has a tendency to repeat itself; therefore, any strategy for returning to Iraq should be formed only after careful consideration of recent history.

The Iraq War that ended in 2011 was troubled by the lack of peace that followed the completion of the heavy fighting. This current campaign is already of the limited variety; President Obama has vowed to “degrade, and ultimately destroy [ISIS]”, but has offered no strategy for dealing with the aftermath. This is interesting given that the aftermath will likely be the most difficult part of the entire endeavor. It is easy for the president to say that the reins will be handed off to “partners on the front lines” and ultimately the people of Iraq to rebuild their country through U.S. support, but without troops physically on the ground in Iraq save for a few hundred military advisors, how supportive can the U.S. really be?

In an interview with NPR, President Obama’s National Security Advisor, Susan Rice gave a definitive “yes” in response to the question of whether “a few hundred trainers” could build a formidable Iraqi force. Rice explained that “what we’re going to do with those trainers is not fight for the Iraqis, but give them the wherewithal, the planning, the support, the advice, the assistance, the equipment to help the Iraqis build back and to be effective.” Unfortunately, after an almost decade-long war involving thousands of troops on the ground and a $25 billion plan that was executed to build and train a self-sufficient Iraqi army, 4 out of the 14 divisions that constitute Iraq’s army left their equipment and uniforms behind and ran when conflict arose. Rice admitted as much in the NPR interview, conceding that “there are units among the Iraqi security forces that have demonstrated in the course of the last months an incapacity.” She then went on to point out the successes of Iraqi and Kurdish fighters at the Mosul and Haditha dams and Irbil. Despite these victories it is curious that the course of action for strengthening the Iraqi military sounds eerily similar to the previous one, and that despite the immense time and effort spent building and training the Iraqi military the first time, U.S. involvement is direly needed to defeat ISIS.

Suggesting that the United States approach the conflict with ISIS as Iraq War 2.0 is absurd. The common sentiment among Americans across the country strongly suggests that people want something to be done about ISIS, but engaging in a full-scale war should not be that something. And, given the current tumultuousness of the international climate and the partisanship of the domestic climate (not to mention the upcoming midterm elections), it’s ultimately not feasible. But sometime in the future, the airstrike campaign will end, and most likely, ISIS will be defeated. So what’s the plan after that? President Obama contends that the fight against ISIS will not be swift, but no matter how long it takes, once the campaign is finished, there will be a power vacuum left in the region, and the United States will walk away. Though vision in hindsight tends to be 20/20, it is not pointless for the President to take a critical look at the way the Iraq War ended.

Making good on his campaign promise to end the war in Iraq, President Obama made the decision (in conjunction with and at the near demand of the U.S.-backed Iraqi president, Nouri al-Maliki) to bring the remaining troops home despite warnings from people who had been in Iraq during the war including retired four-star general and advisor to the Bush administration during the Iraq War Jack Keane, who called the 2011 troop pull-out “an absolute strategic failure on the part of the Obama administration,” in an interview with PBS Frontline. The trouble began within days of the U.S. leaving when Sunni government officials were forced out by President Maliki. General Keane says some of the most effective military leaders in the Iraqi army were driven out during this period of time, so the Iraqi military was actually a shell of itself even before the fighting with ISIS began. Keane believes that “When ISIS finally comes to Mosul, some of those units that were there were at 50 to 60 percent strength. That’s not a cohesive organization. Fighting forces, particularly ground forces, have to operate on the basis of unit cohesion. They had none of that, and they had ineffective leaders as well.”

One of the most effective strategies for rebuilding Iraq during the war was a military tactic called “clear, hold, and build”. It was a strategy spearheaded by Colonel H.R. McMasters in Tal Afar, in which ground troops cleared areas of militants, secured the areas, and then helped rebuild them with the Iraqi people who lived there. After its implementation, peace prevailed in Tal Afar. Soldiers were able to connect with the people who lived within the cleared areas and greatly support the rebuilding process. Due to its success, then Secretary of State Condoleeza Rice was an important supporter of the plan. But due to Secretary of Defense Donald Rumsfeld’s insistence on a small and nimble military force, the “clear, hold, and build” method, which required the deployment of more ground troops, continued to exist only in Tal Afar. This time, no ground troops will be deployed at all, according to President Obama.

Peace and security in Iraq hinges upon the strength and wherewithal of Iraq itself, not the strength of a U.S. “counterterrorism operation”. What happens if the destruction of ISIS makes way for another group just like it? The United States has no trouble using military power to defeat an enemy, but what continues to plague its campaigns abroad is a lack of the finesse required to ensure a lasting peace.

There are no good options for U.S. action in this situation. The reason for this stems from a mixture of misguided U.S. actions in the past as well as factors of politics, religion, and history that are—and have always been—beyond the United States’ control. But how much good will killing a specific group of extremists do if extremism will undoubtedly live on? The enemy of extremism is reason. It is too late to rewrite the origins of extremism out of history, but there may be some reasonable actions for the United States to take to quell some extremism in the future. These include the following: Closing down the detention center at Guantanamo Bay and expressing some measure of regret for the human rights abuses that took place there and apologies for the individuals who were imprisoned wrongly or indefinitely, revising a drone policy that precariously hinges on the argument that the U.S. is engaged in a constant global war (a global war that has claimed the lives of hundreds of innocent civilians), and making a concerted effort to foster and maintain strong relationships with Sunni leaders, Kurdish leaders, Shi’ite leaders, and Iraqi officials who—unlike Nouri al-Maliki—are not partial to one ethnic or religious group and will fight against sectarianism within the government.

But for now, there are only airstrikes on the agenda.