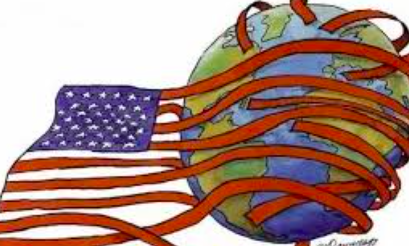 Several studies* have shown direct correlations at least until the ‘90s between U.S. foreign aid expenditure and human rights violations in recipient countries. This correlation was especially strong in the ‘80s as a product of Reagan’s rollback policy against communism – foreign aid was directed to countries that demonstrated they were willing to use all available means to curb the rise of communism. In practice, this meant torturing and keeping political prisoners.

Hawkish policy makers endorse this as a necessary measure to maintain American hegemony which they view as essential to the maintenance of world peace.

Outside of aid that goes to unsavory regimes we deem useful in the maintenance of American global supremacy, America’s actions in the international scene have demonstrated that, contrary to popular opinion, we do not believe in the preservation of rights or the spread of democracy.

Our nation building operations in Iraq have left the country in disrepair; protests calling for the overthrow of the Iraqi administration we installed have been ongoing since October 2019. Protests, largely led by women, have also been ongoing in Chile, where we created the conditions for Pinochet’s coup in 1973. The legacy of the brutal Pinochet dictatorship lives on in the modern Chilean constitution.

For many, when Bernie Sanders defended his record of speaking highly about countries we (Americans) have classified as authoritarian regimes, it seemed to be a tremendous violation of campaign etiquette. Americans were happy to turn a blind eye to elected presidents’ dealings with authoritarians as long as there was a degree of secrecy in how the dealings had occurred. The Reagan-era Iran-Contra affair is a masterclass in the accepted conventions for dealings with groups and people the American body politic might not approve of.

The Reagan administration, while publicly denouncing it as a terrorist state, sold Iran several billion dollars worth of weapons. Some of the money from those weapons sales was diverted to fund the Contras, a militia fighting the Marxist Sandinista regime in Nicaragua.

In a Times interview, Bernie Sanders praised the Sandinista government for its literacy program and the Soviets for their free health care but does say that the Sandinistas were undemocratic and that “the Soviet Union was an authoritarian dictatorship.”

In America, it is presidential to fund groups like the Contras, who used terrorist tactics and targeted civilians. It is not presidential to applaud the positive elements of policy initiatives from regimes that have committed human rights violations, but more importantly, are self-identified Marxist.

American foreign policy has now become almost entirely colored by our military expenditure. To follow the law of the instrument where “if all you have is a hammer, everything looks like a nail,” America’s disproportionate spending on military affairs has influenced foreign policy makers to view all threats as opportunities for military response.

Traditionally there has been a difference between American soft power and hard power initiatives. The military-industrial complex was viewed firmly within the sphere of our coercive “hard power”; our “soft power” was seen as the international presence of American consumer products (like Coca Cola, Levi’s jeans and General Electric household appliances), but the line between the two has increasingly blurred.

The military-industrial complex has bled into our foreign soft power policy initiatives. We have increasingly started to view our international military bases as soft power centers that serve to co-opt the local culture. The military currently has bases in 13 countries and, as a result, those countries have ‘Americanized’ facets of their culture to cater to the troops in those bases.

Increasingly, brand recognition of American consumer products has started to extend to American-made instruments of war. Our weapon deals with Saudi Arabia have resulted in consumer demand for American weapons, especially among Al Qaeda affiliated groups in Yemen. There, supply and demand exists for American guns in unofficial gun markets. American weapons are available for purchase throughout the Middle East in conflicts from Syria to Afghanistan.

In practice, soft power has never been soft. If there exists some cooptative property of Coca Cola or Levi’s jeans that works to pull foreign consumers into the American fold, it exists at the expense of the alienation of economies and laborers that face the consequences of the outsourced brutality of American capitalism. The presence of American arms in gun markets in Yemen is just the consummation of a flawed understanding of the ‘allure’ of America’s brand.

Bad foreign policy is also largely the product of American apathy. In a FiveThirtyEight poll, only 1.3 percent of Democratic voters rank knowledge of foreign affairs as a priority in a candidate as compared to the 39.6 percent that rank defeating Trump as a priority. Presidents know this and know that there is significant leeway to commit war crimes without tarnishing their public image. Noam Chomsky posits that it is likely that all presidents after World War II could be considered war criminals by  standards set in the Nuremberg trials.

The combined influence of hawkish foreign policy makers, the military-industrial complex and apathy among voters have crafted a foreign policy that is incoherent, counter to its stated goals and expressly immoral. Bernie Sanders’ stances endorsing the positive aspects of the repressive regimes in Cuba and Nicaragua is, at worst, presidential and, at best, potential for a necessary realignment of American foreign policy priorities. We are supposed to be proud of America as the country that leads the Free World when American foreign policy should be a source of national shame.