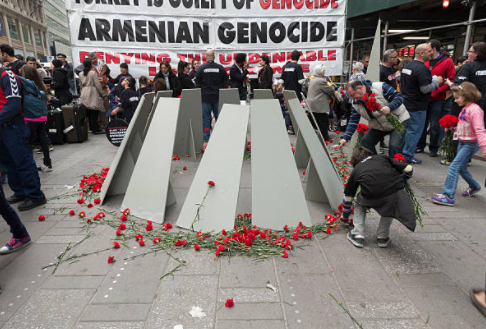 On Saturday, April 24th, President Biden officially recognized the Armenian Genocide, becoming the first American president to do so. Despite the date marking 106 years since the considered start of the Armenian Genocide, and both chambers of Congress passing resolutions acknowledging its occurrence in the previous year, no prior American president was willing to threaten the US-Turkey relationship by acknowledging it. Despite immense evidence and the recognition of more than 20 countries, why does Turkey still deny the Armenian genocide, and what will happen to American relations with Turkey now?

In the early 1900s the Young Turks, or Committee of Unity and Progress (CUP), seized power in the Ottoman Empire. Christian Armenians were initially excited by their ascendence, as they interpreted the CUP’s promise of fair elections as a sign of political equality that was previously kept from Armenians by Muslim Kurds. However, the Young Turks quickly grew suspicious of non-Turks, blaming them for the loss of the First Balkan War, and launched a series of discriminatory measures against Armenians. When the Ottoman Empire joined World War I on Germany’s side, tensions grew even higher. After suffering a massive defeat by the Russians in the battle of Sarkar, the Young Turks blamed Armenian soldiers entirely and accused them of being “pro-Russian… saboteurs”. On April 24th, 1915, 250 Armenian intellectuals were arrested and executed, marking the start of the Armenian genocide. All Armenian soldiers were disarmed and executed by Ottoman Turks, while simultaneously Armenian villages and citizens were massacred. They were forced out of their homes and marched through the desert to concentration camps where they were executed. However, many Armenians died on the journey alone due to starvation, exposure or mistreatment. Between 600,000 and 1 million Armenians died between 1915-1916, and the International Association of Genocide Scholars claims the death toll reached “more than a million”. The genocide resulted in a near-total erasure of Armenian people from what is now the Republic of Turkey by the end of World War I.

Despite agreement among a majority of historians and scholars that the killings of Armenians were in fact genocide, Turkey continues to vehemently deny it. In the UN Convention on Genocide in 1948, genocide was defined as any act that means “to destroy, in whole or in part, a national, ethnic, racial or religious group”. However, the Turkish government argues that the deaths of Armenians were not carried out by the Ottoman Turks intentionally or systematically, but rather the deaths were caused by the overall warfare in the country. The Turkish government also believes the estimated death toll is inflated to exaggerate the severity and predicts that just 300,000 Armenians died while most scholars agree the figure is closer to a million. Over 20 countries, including Canada and France, have already acknowledged the acts as a genocide, and President Biden himself advocated for American acknowledgment while senator. Along with pressure from legislators and allied countries, the large population of Armenian-Americans who fled to the United States after the genocide was a major contributor to President Biden’s decision to finally acknowledge its occurrence. The consequences of its recognition, though, have already been highly detrimental to US-Turkey relations. The main reason that American presidents have avoided acknowledgment has been to preserve their relationship with Turkey, which allows the United States crucial access to its military bases in order to fight terrorist organizations in the Middle East as Turkey is an active member of the Defeat-ISIS Coalition. Unfortunately, President Biden’s acknowledgment caused almost immediate backlash from the Turkish government, including the Turkish foreign, Minister Mevlut Cavusolgu, calling the move a “grave mistake” that will “open a deep wound that undermines our mutual trust and friendship”. Additionally, the US State Department closed its embassy and consulates in Turkey due to fear of riots and protests in response to the acknowledgment and also warned Americans in Turkey to avoid the shutdown locations.

President Biden’s acknowledgment of the Armenian genocide is a small step towards re-introducing American involvement in worldwide human rights causes after the nationalism promoted by the Trump Administration. However, will the US-Turkey relationship further devolve due to the decision, and what will that mean for the fight against terrorism in the Middle East? Only time will tell, but President Biden deemed the massive benefit of respecting and honoring the plight of Armenians as more important than the negative repercussions.