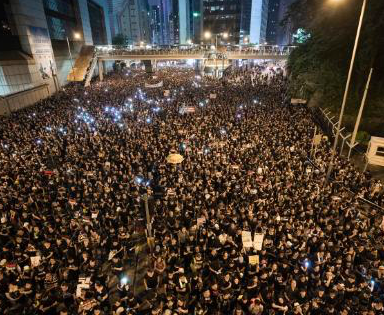 In Hong Kong, protests began in opposition to the Mainland government’s overreach in the administration of the supposedly autonomous region. In Tibet, protesters have stood in opposition to Chinese occupation since the People’s Liberation Army invaded in 1959. In tandem to Tibet, the Uighurs of XinJiang province in the west of China have also faced systemic oppression since the Communist party’s rise to power in 1949. China’s grip on the region tightened with American assistance after we began our post-9/11 war on terror culminating in up to a million Uighurs interned in labor camps.

Although America has ostensibly been the defender of the free world of the 21st century, our response to China’s oppression of its minorities has been tepid at best. In response to the reports of human rights violations and police brutality in Hong Kong, congress passed the Hong Kong Human Rights and Democracy Act of 2019, which allows the president to sanction individuals who have violated human rights. This largely ignores the institutional problem that the severe police crackdown was likely at the behest of the China-backed Hong Kong government. So far, there is no evidence to suggest that Trump has actually imposed any sanctions on any individuals.

Our most recent response to the ongoing oppression of Tibetans was the Reciprocal Access to Tibet Act of 2018. The act effectively means that all Chinese officials that restricted American diplomats’ access to Tibet are banned from entry into the states. This is the American response to decades of human rights violations and what the Dalai Lama has termed a “cultural genocide”.

Although we were more forceful in our response to the human rights violations in XinJiang, which some have referred to as the most policed place on earth, the 2019 UIGHUR Act outlines a similar set of responsibilities that the President has yet to act on. It directs the President to “impose sanctions and export restrictions related to China’s treatment of the Uighurs, a predominantly Muslim Turkic ethnic group.” Whatever sanctions Trump had imposed are overshadowed by his trade deal sign Jan 15th this year, which cracks down on intellectual property theft but has no terms referring to the treatment of Uighurs.

The trade deal exposes why America is so reluctant to take a strong stance on China’s mass human rights violations. It is hard to risk invoking the ire of our biggest trade partner and keep corporate interests happy. The NBA very publicly demonstrated their reluctance to at all condemn China’s overreach in Hong Kong when the manager of the Houston Rockets was forced to retract a tweet in support of Hong Kong protesters. Facing threats from the Chinese State television (China Central Television) and the Chinese streaming service Tencent, the NBA condemned the tweet, calling it ‘regrettable’. For most American companies that could hold any sway over Chinese consumers, it is too risky to take a stance in opposition to the Chinese Government.

It isn’t only corporate interests that have weakened our position to take any action against China’s repeated human rights violations. We also view China as an ally in the war on terror. At the height of the U.S.-Chinese alliance on this front, we interned 22 Uighurs in Guantanamo Bay, where we keep ‘enemy combatants.’ Although it was decided that most of the 22 prisoners presented no threat to America and had no affiliations with Al-Qaeda or the Taliban, they remained in our custody. In the early 2000s, as part of our war on terror, we assisted in China’s oppression of Uighurs.

Much of the rhetoric from this era of Sino-American collaboration remains; in response to our Reciprocal Access to Tibet Act, the spokesperson for the Chinese foreign ministry stated that the act “sent seriously wrong signals to Tibetan separatist elements,” implying that the act showed American support for terrorists. China’s mass internment of Uighurs has been compared to the American response to 9/11. The most pernicious legacy from our war on terror might not be the torture in Abu Ghraib or Guantanamo but the example we set for other nations that needed to suppress minorities under the auspices of a war on terror.

The Hong Kong protests were ongoing and increasing in intensity until the coronavirus outbreak spread from mainland China. They began in response to an extradition bill that would allow for the transfer of prisoners between Taiwan, Hong Kong, Macau and China. Once the bill was withdrawn, the protests continued, pushing for a democracy independent of Chinese intervention. Protesters have also made appeals for solidarity with Tibetans and Uighurs.

The Hong Kong legislative council (LegCo) is composed of 70 seats, half of which are democratically elected. LegCo is led by a Chief Executive who is elected by 1200 electors who are heavily influenced by the Chinese government. The remaining 35 seats represent special interests ranging from education to financial services. One of the protesters’ five demands was for universal suffrage and the replacement of the current Chief Executive, Carrie Lam, who has defended the police’s use of force.

A more proactive foreign policy would be one that reinforces the protesters’ demands. If anyone still believes that America’s international goals are the spread of democracy and freedom, this would seem the obvious stance. Our economic interests incentivise our support too. Hong Kong serves as a key intermediary in Sino-American trade with 99% of shipments in and out of Hong Kong from re-exports. If Hong Kong were to fully fall into China’s fold we would lose the advantages from trading through a tariff-free buffer zone.

Although there is little pretense that the American government has ever cared about human rights, there has always been a certain utility to our pretensions. Facing China as a rival world power, it was useful to denounce them as an inhumane, authoritarian government. Secretary of State, Mike Pompeo, said that China is “in a league of its own” when it comes to human rights violations. It’s very possible that this is true; however, our attitude of superiority is dubious when we have directly aided and abetted in China’s campaign of oppression. It is for this same reason that America has never fully condemned any of China’s oppression; our hands are tainted with the same blood.