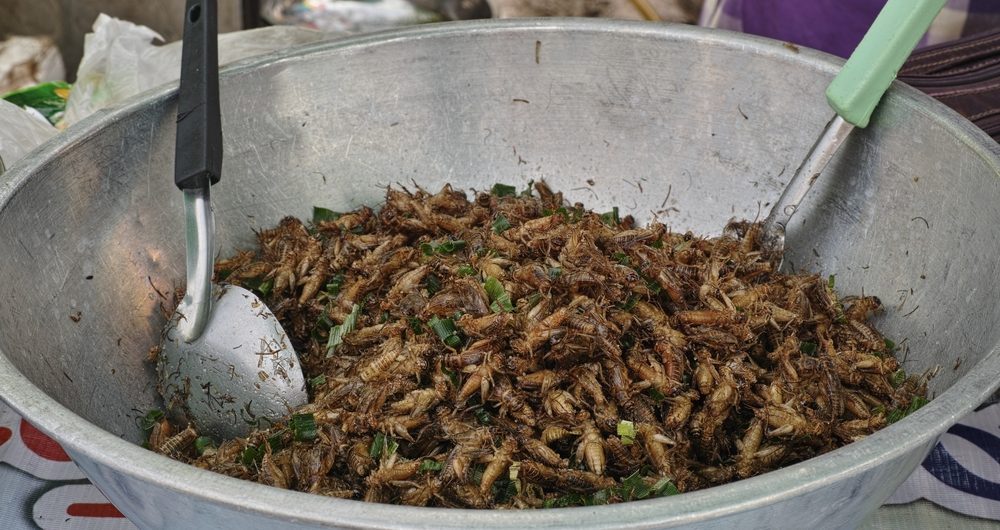 I had just listened to a speech by Secretary of State John Kerry at the United Nations Social Good Summit in New York City, when I decided to take a break and walk outside for a while. The summit was held at the 92nd Street Y, a nonprofit Jewish community center, and during the event, a street festival was taking place outside to celebrate the neighborhood’s diversity with performances from various countries.

After bumping into a few friends that were campaigned for a local state senate candidate, an ice cream truck caught my attention. Sponsored by the The Economist, the truck was giving away free ice cream — an offer that neither my friends nor I could refuse. After waiting in line for a few minutes, one of the ice cream truck ushers came up to us and said that we had the choice of crickets, mealworms, or grasshoppers as a topping on our ice cream.

After hearing him repeat the same choice to others in line, I took a closer look at the ice cream truck. I saw that the truck was colored in red with white stripes representing segments of an insect’s body. I also saw three big jars on the counter; each one was filled with one of the insects that were being offered.

While many of the people in line next to me turned away, I decided to give it a try. I knew insects were quite nutritious – cultures in many parts of the world ate them – and I remembered reading that insects had the potential to fight global poverty. I selected the crickets because they looked the least disgusting and watched as the server piled them onto my honeycomb ice cream.

It took a little effort to overcome the thought of eating insects, but it was worth it. The crickets tasted rather nutty. I encouraged my friends (via Snapchat) to join me on this small adventure, but their reactions were overwhelmingly negative.

And while I understand their reasoning, there are a lot of reasons why they should have tried the crickets.

First, while eating insects might seem disgusting to us Westerners, insects are a normal part of many diets around the globe. In fact, the U.N. reports that there are currently more than 1,400 edible insect species. A 2013 report by the Food and Agriculture Organization of the United Nations states that 2 billion people (around 30 percent of the world’s population) eat insects as part of their regular diet. For example, caterpillars are eaten in the Democratic Republic of Congo, while locusts and beetles are dined on in Thailand.

And with good reason, too. Eating insects is quite healthy: They are protein rich, consist of healthy fats, and are high in nutrients like calcium, iron, B vitamins, selenium, and zinc.

Insects also represent a more sustainable food source. We often forget the costs involved in producing meat (livestock), as we neglect the fact that animals need to be fed a large amount of biomass in order to provide us with healthy meat. Currently, “A cow takes 8kg of feed to produce 1kg of beef, but only 40 percent of the cow can be eaten. Crickets require just 1.7kg of food to produce 1kg of meat, and 80 percent is considered edible.” Producing insects en mass would emit considerably fewer greenhouse gasses compared with the production of livestock, and they could potentially be used as a feeding source for livestock.

In addition, insects consume a lot less water, making their ecological footprint lower and allowing them to thrive in the harshest conditions.

Particularly in areas where a majority of people are undernourished due to poverty or climatic factors that hinder agricultural development, insects could become a viable solution to food shortage. Indeed, in 2013 the Clinton Global Initiative awarded the Hult Prize to a group of students seeking to develop insect farm projects for farmers in food-scarce regions.

There is an even bigger picture here, as insects could one day be part of all our diets, including squeamish Westerners. The U.N. projects that the global population will reach 9.7 billion by 2050, and estimates state that we will need to produce twice as much food as we do today.

The task is likely to become increasingly difficult for numerous factors, including climate change.

While some regions might benefit from higher global temperatures, such as the Russian hinterland, the rapid rise in the world’s temperature already does systematic damage to the agricultural base of other countries. Marathwada, one of the five regions in the Indian state of Maharashtra, has suffered of severe droughts over the past years due to the rise of the country’s average temperature by 0.6 °C, resulting even in the suicide of farmers. In total, India had a reduced wheat production of four million tons due to the heat wave the country witnessed in 2013.

The effects of these developments can not only cause humanitarian chaos but can also lead to political instability, as we saw in Syria. We must also not forget the environmental catastrophes Syria had faced in the years before its civil war. A study by the Proceedings of the National Academy of Sciences showed a clear link between climate change and droughts in Syria from 2006 until 2009. These caused drastic increases in food prices and 1.5 million Syrians to abandon their farms and flock to the country’s cities.

The harsh environmental conditions worsened the lives of millions of Syrians and contributed to the growing anger and frustration with the political system and the government it supported.

Finding and supporting alternative sources of nutrition will not only lower the cost of food production but also help guarantee access to food in critical regions and ultimately prevent political instability.

Numerous projects already make it easier for us to adapt to insect-consuming changes. For example, Eco Insect Farming (EIF) Thailand now offers cricket flour, while All Things Bugs, an American start up that receives funding from the Gates foundation, offers finely milled cricket powder. Even if we refuse to follow this trend and include insects or insect products in our diet, children might soon be brought up eating insects in a more sustainable world where it is part of their natural diet.

Don’t get me wrong, it took more than a little effort to overcome the repulsion of crunching crickets, and it will likely continue to in the future. However, considering the current and projected rate of global population growth and our moral responsibility to fight world hunger, I believe that we need to take a closer look at viable alternatives.